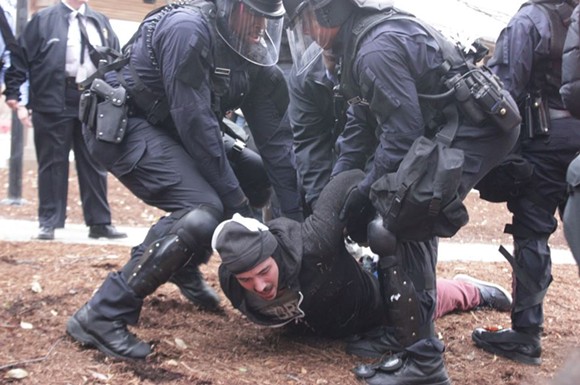 Last August, police arrested scores of protesters under the so-called "five-second rule," which forced demonstrators to walk continuously if they wanted to avoid spending the night in jail.

Now, a year afterward, some of those protesters have received a criminal court summons in the mail.

Calling the decision to issue the charges "a blatant violation of constitutional rights and an appalling misuse of our already overburdened court system," the American Civil Liberties Union condemned the county's actions in a joint statement with fifteen other organizations, including the Arch City Defenders and the Saint Louis University legal clinic

"The State Prosecuting Attorney has refused to pursue these charges. The City of Ferguson, where most incidents occurred, has not pursued charges," the statement continued. "It is unclear why the St. Louis County Counselor has reached a different conclusion from other local prosecutors who have rightly decided not to pursue charges. But, it is clear that many individuals will not receive notice of these delayed charges and will ultimately be issued arrest warrants."

Some of the protestors had been swept up in mass arrests or dragged off sidewalks for standing still. Many never received charging documents or a court date.

"It appears, as far as we can tell, that everyone is being charged who had been arrested," ACLU-Missouri legal director Tony Rothert told The Huffington Post. "We've been led to believe by the St. Louis County Counselor's Office that that's what they're doing, so that's one big reason, but also we've started to get calls and complaints from a wide variety of people who were arrested on different days, but mostly in August, who are receiving summons. It's people who were arrested in a big group and released without any charges and haven't heard anything — haven't heard anything — for a year and now are receiving a summons."

The "five-second rule" was widely criticized last year as a violation of protesters' civil rights, and St. Louis County Police Chief Jon Belmar later admitted that the rule was badly implemented and had even confused officers.

The rule was just one example among a collection of questionable arrest practices that played out in Ferguson last summer.

St. Louis County Counselor Peter Krane, whose office issued the recent charges, told the St. Louis Post-Dispatch that his staff had to wait until January to begin reviewing the Ferguson files, which accounted for the delay.

The decision to file charges will likely increase the scrutiny on St. Louis County, and it couldn't come at a worse time. The county is already taking flak for filing charges against two journalists, the Huffington Post's Ryan J. Reilly and The Washington Post's Wesley Lowery. Last month, a federal investigation of the St. Louis County family court system found violations of juvenile's civil rights and racial bias. And the county continues to wrestle with reforming the exploitative morass of its municipal court system.

What the county doesn't need, the ACLU's Rothert said, is more lawsuits.

"Mistakes were made in arresting people last August, last September, last October," Rothert told St. Louis Public Radio (KWMU 90.7). "It took a couple of court injunctions to stop some of the illegal activities. But now, St. Louis County is charging people who were arrested illegally before those injunctions were issued."