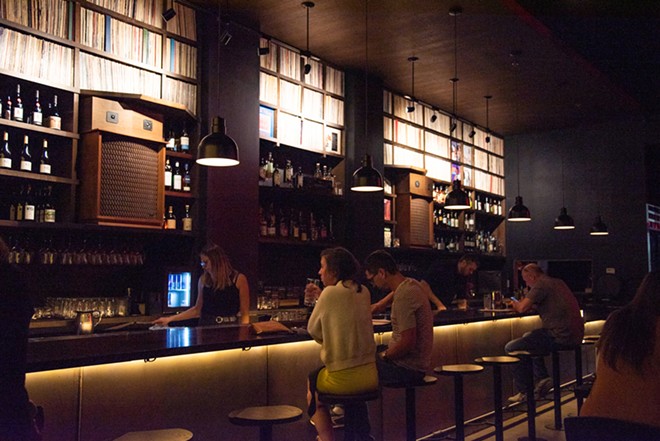 You have to face the music sometime. You might as well make it fun. As part of the RFT 2021 Bar Guide, we've put together a list of places where you can do just that.

Keypers Piano Bar
2280 Jefferson Avenue, 314-664-6496
keypersstl.com
The keys at Keypers Piano Bar start their revving at 8 p.m. every Friday night, filling the diverse-friendly spot with the sound of show tunes, Broadway hits and whatever songs are stored in the vast mental library of “Piano Patty.” The friendly patrons, cheap drinks and patio would make it a pleasant neighborhood bar in its own right, but the weekly singalongs are truly the bar’s lifeblood, rollicking into the night until the patrons are either too hammered to sing the lyrics or Patty’s fingers simply need a rest. Keypers is like a chorus you want to sing again and again, and there’s a reason people keep coming back every week to request Chicago’s “When You’re Good to Mama” — because when you’re good to a bar, it’s good to you. —Danny Wicentowski

Blueberry Hill
6504 Delmar Boulevard, 314-727-4444
blueberryhill.com
If you want to find your thrill — yeah, we went there — you definitely want to swing on into Blueberry Hill. The restaurant /bar/venue has been a longtime staple of the University City Loop district and is owned by infamous local businessman Joe Edwards. The entire establishment is a palace built in tribute to the retro-loving boomer aesthetic that many people find so charming. The place is filled with vintage toys and memorabilia, most of which is displayed safely behind glass. There’s even a cast of Chuck Berry’s hands featured right near where visitors enter the bar. And while lots of drinking gets done here, the place offers more than just booze. There are often concerts held in the basement, there’s a room filled with video games, and they also have an entire section of the restaurant dedicated to darts. —Jaime Lees

McLain’s Corner Bar
3516 South Big Bend, 314-647-6531
mclainscorner.com
If you’re looking for a honky-tonk with space to breathe and a mic to sing into on Thursday nights, there’s a place for you at McLain’s Corner Bar — and, if you’re smart, there should be a plate of its famous grilled wings to go along with it. In operation for more than 40 years, this Maplewood institution sits in the shadow of an overpass and is known for its full menu and easygoing atmosphere. Karaoke nights, which run from 9 p.m. to 1 a.m., are wide open for selections, from country hits to those niche personal favorites you’re still working up the courage to attempt. Thankfully, McLain’s sells courage in liquid form — all you need to do is sing. —Danny Wicentowski

Pop’s
1403 Mississippi Ave., Sauget, Illinois; 618-274-6720
popsrocks.com
In St. Louis, the phrase “heading to the East Side” typically means you’re going into lawless international waters (Illinois) to partake in some debauchery. It means you’re going to a place like Pop’s. But Pop’s, a greater St. Louis institution since 1981, is really like two distinct clubs in a timeshare arrangement. Early in the evening, it’s a mainstream 1,500-capacity concert venue, pulling in great local and national performers for the types of audiences you’d expect anywhere in the region. Then those folks clear out by midnight and the late-night/early-morning crowd begins to trickle in, not hitting their stride until about 2 a.m. The scantily clad women — some of whom perform at the nearby strip clubs — and the young and the rowdy are all there to dance, hang out and sometimes fight. It feels as if any East Side vice one might be tempted to indulge in is there for the offering. Most cities don’t have a sinister alter ego right across a river where you can live life on the edge well past dawn, and I think the fact that we do is among the most interesting parts of living here. There’s most certainly an element of danger to it all, but many in our crime-accustomed metropolis will tolerate some danger for a good time. And for those with the appetite and the street cred, Pop’s keeps it poppin’. —Chris Andoe

Broadway Oyster Bar
736 South Broadway, 314-621-8811
www.broadwayoysterbar.com
Broadway Oyster Bar is as close as you can get to a landlocked state’s interpretation of New Orleans life. The legendary establishment offers live music every night of the week — and often during the day — from a number of genres and artists, both locals and out-of-towners. Pair the music with one of their many neon-colored, NOLA-originating cocktails or St. Louis drafts, and you’re sure to have a good time. Whether you’re bringing a Tinder date, your grandparents or your dog, there are plenty of spaces, both inside and outside, to satisfy everyone. All you have to do is follow the sign painted on their front door: “Leave Your Attitude At Home." —Zoë Butler

Takashima Record Bar
4095 Chouteau, 314-925-8982
takashimarecordbar.com
Takashima Records has a sign on every table asking customers to be mindful of those “enjoying the vinyl experience” and to please not ask the DJs for requests. This is a house built on vinyl, and the new owners take things seriously. Inspired by Japanese listening bars, some of which go back to the 1950s, the bar will always have a local or national DJ on the decks for your listening enjoyment. The revamped menu features a selection of small-plate foods (the pulled-pork sliders have a real kick to them) and several tasty cocktails, both of the alcoholic and nonalcoholic varieties. (You can’t go wrong with the Love & Happiness.) At the end of the night, your bill features a spot not only to tip the wait staff but also the DJ. Pay the piper! If you’re looking for an extremely chill and dimly lit night out, look no further than Takashima. —Jack Probst

BB’s Jazz, Blues & Soups
700 South Broadway, 314-436-5222
bbsjazzbluessoups.com
We here at the RFT love this bar. We’ve written it up countless times and celebrated it in the past as St. Louis’ best blues bar, and here’s a bit of not-so-breaking news: It’s still great. Consistently a place for an outstanding night out, BB’s importance to St. Louis has only become more obvious since Beale on Broadway sadly went down in 2019, leaving BB’s and Broadway Oyster Bars as the only surviving points in the former “Blues Triangle.” We’re not expecting anything in BB's future but years of success, but remember to never take this landmark club for granted. And grab a catfish po boy while you’re at it. —Doyle Murphy