MABEL SUEN The acclaimed chef returned to his hometown from New Mexico.

If Rob Connoley had his way, Squatter's Café would not exist — at least not as Plan A. Perhaps somewhere down the road — after he had garnered national acclaim for his modern, forage-focused tasting-menu concept, secured a James Beard nod and wanted a break — it would have made for a good sophomore effort: a cozy breakfast-and-lunch spot where he'd cook off hot plates directly in front of his guests while sipping tea and bantering with his regulars.

Connoley had much grander plans for his hometown debut. He'd sketched out his vision even before he'd left New Mexico and his acclaimed restaurant there, the Curious Kumquat. Called Bulrush, his introduction to St. Louis would be a fine-dining canvas for his foraging passion. He'd worked out how he'd source the menu, what the aesthetics would be, the system he'd use for charging diners and how he would compensate his staff. When he arrived in town, he figured all he would have to do was find a building and sign on the dotted line.

Unfortunately, it wasn't that easy. The real estate component has proven much more onerous than Connoley anticipated, forcing him to spend more than a year and a half chasing down the perfect location that, though he's come close, has so far remained elusive. To occupy himself, he's done pop-up dinners, cooked on lines around town and toured the country to promote his cookbook, Acorns and Cattails. Still, it wasn't enough to satisfy his restless chef's heart. 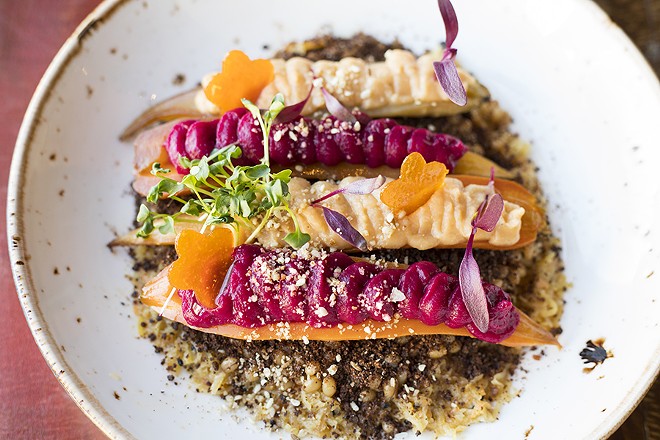 This past November, Connoley decided he could no longer sit by and wait for Bulrush to happen. When he learned that KDHX was looking for a tenant to take over the former Magnolia Cafe restaurant space inside its building, Connoley jumped at the opportunity to give eager diners a regular place to eat his food. He knew upfront that it wasn't going to be Bulrush — and he didn't want it to be. He just needed to get back to cooking his own food again.

As a casual daytime concept, Squatter's seems a far cry from what Connoley still plans to do at Bulrush. However, those differences are more in form than substance. Digging beneath the surface, the two restaurants are philosophically congruent in the sense that they both adhere to Connoley's ethos of using hyper-local, seasonal ingredients — some of them foraged — in reimagined dishes, making as much in-house as possible and deploying a fierce no-waste policy. In this sense, you may not be sitting down to a formal Bulrush tasting menu at Squatter's, but you're probably not going to be eating all that much differently than if you were.

You will, however, be sitting in a vastly different dining room. The space is small and low-key, consisting of a handful of tables and a seven-seat lunch counter. If you dined at the former tenant, you'll notice that not much has changed in the looks department. The layout still consists of a high, black-ceilinged room with gray-painted exposed-brick accents. Squatter's uses the old cafe's rustic wood, four-top tables, which complement the wooden bar. Exposed ductwork, pendant lights and KDHX-themed artwork adorn the room, giving the feel of an artsy deli/coffeeshop.

For a restaurant dry-walled off from a radio station, Squatter's feels warm, mostly because Connoley and his sous chef, Justin Bell, prepare food that lights up the soul. Do not be fooled by the casual concept and seemingly familiar dishes: These chefs are preparing some of the city's most exciting, innovative food off nothing more than three tabletop burners and a small TurboChef oven. Dishes that seem familiar — a jar of yogurt and granola, some overnight oats — are reimagined to the point that you question whether or not you've ever really eaten them. Yet they remain accessible.

The former — a tart, housemade yogurt as luxurious as its Greek brethren — is made even more decadent by apricots, sugar-coated pecans and a caramelly granola that makes you wonder why Connoley doesn't shift gears and open a trail-mix company. And he doesn't stop there. Hiding underneath these layers of texture and flavor sits a sphere of white chocolate filled with sweet cream that bursts when you bite into it, like a high-end chocolate truffle. It's a yogurt parfait in the sense that St. Peter's Basilica is a church.

I wonder if I'll be able to eat hot oatmeal again after having Squatter's overnight oats. This no-cook preparation of the breakfast staple has a taste and consistency somewhere between steel-cut oats and cake batter. Butterscotch, hazelnuts and pecan praline add texture and a balance of sweet and savory. Like the yogurt, this is oatmeal in technicolor.

Naturally, then, biscuits and gravy prove to be nothing like the bland, often pasty dish you find at diners. Anything less than Connoley's silken, bacon-infused gravy would be an insult to his cloud-like biscuits. Flecks of candied bacon crumbles give a backbeat of sweetness without overwhelming the savory notes.

If you want a window into Connoley's and Bell's obsessiveness, observe the sweet potatoes that serve as the base of their hash: Each piece is cut with such uniformity that any size difference is microscopic. It might seem like a minor point, but the fact that they are so fastidious with their cuts on a breakfast dish at a fast-casual cafe speaks volumes about the care they put into their food. Then again, asking someone to pay attention to such things is next to impossible when you are devouring those potatoes and the pork confit that tops them. The meat is spreadable, paired with apples and butterscotch and an over-easy egg that ties everything together with its rich yolk.

Grits so creamy they'd bring a tear to the eye of a Southern grandma would normally be the star of the show, but here they share equal billing with a pull-apart chicken mole. Unlike the rich, chocolatey style often favored by local restaurants, this version is more delicate and cinnamon-forward, as if chicken jus was turned into a baking-spiced pan sauce. Squatter's changes the topping for the grits on a regular basis, so you won't always get to feast on this wonderful chicken. That provides an opportunity to see more of what the chefs can do, though it also means not having daily access to this transcendent mole.

The mole may be a high point, but it is merely one peak in a mountain range of perfection. If the ricotta toast were sitting on the floor of the Sistine Chapel, you'd be forgiven for looking down rather than up. It's a visually breathtaking mixed-media assemblage of colors, shapes and textures that looks like a garden at the height of springtime. Whipped ricotta and carrot jam coat a slice of hearty wheat and rye bread; jewel-colored pickled vegetables and herbs adorn the toast and cut through the creaminess of the cheese. It's a feast for both the eyes and the palate.

"Meat & Beans" is what cassoulet looks and tastes like in Missouri — and Connoley's riff is as good as what's served in Provence. If you think of risotto, but sub in white beans for rice, it captures the texture. Roasted pork, housemade pork sausage and pulled chicken bob in the luscious bean "soup," crowned by a single, pork-filled dumpling. It's perfect.

Even something as straightforward as toast is an experience at Squatter's. The rustic wheat bread has a nutty sweetness on its own but can be paired with custard-like lemon curd or an herbal honey butter. This is only a small window into Connoley's baking prowess — he's the rare chef who is as proficient in pastry as the savory side of the kitchen. Other examples include the whimsical "Squat Tart," a brown-sugar-and-cinnamon riff on a pop tart, a ginger cookie that — gasp — is flecked with chunks of actual ginger, and a bacon-studded kouign amann that is a thoughtful, savory take on the trendy pastry.

And pastry isn't the end of Connoley's gifts. Judging by his social-media posts, which advertise candies that look straight out of a high-end, artisanal chocolate shop, he is a bona fide chocolatier. Maybe he'll open one of those next. And a granola business. And a dairy.

Wait, wasn't he here to open Bulrush? Fine, he can do that too. But seeing how well he's keeping us fed in the interim, we can't help but selfishly smile that things didn't go quite as he planned.