Unreal finally understands how to operate our fleet of Mercedes Benzes. Plus: A fashion update for a local hero and a de-gumming of STL sidewalks. 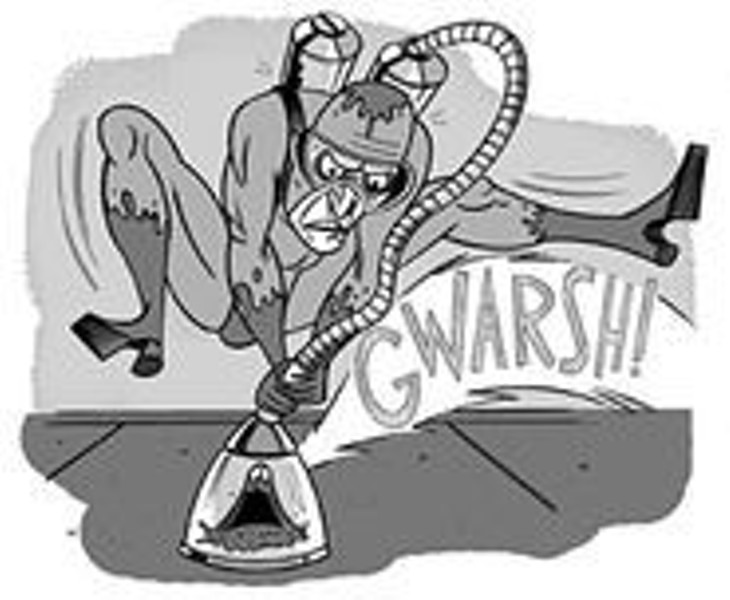 Ever since Felicia Scott and three pals started St. Louis' "premiere" chewing-gum-removal service, Scott hasn't been able to walk anywhere and take her eyes from the sidewalk. She spots sticky nasties everywhere, from McD's to Blueberry Hill to art-gallery doorsteps. "I'm just always thinking to myself: Blecch, this is so gross," she explains during a visit with Unreal last week.

Now that you mention it..., thinks Unreal, scanning just a few square feet of Delmar Boulevard sidewalk. Is that my Hubba Bubba from yesterday? It's already black! Yick!

Scott's fledgling company, GumBlasters-STL, can't cure foul behavior, but it can steam-vacuum a pavement-stuck wad of gum left in a mere five seconds. The process: "Zzzz, scrape, up!"

Scott says her nifty little contraption contains a super-secret-magic solvent that zaps the spat-gum without polluting the environment, not to mention saving the thousands of gallons of water that might be used in an inferior method like power-washing.

Unreal: Who came up with this bright idea?

Felicia Scott: The concept actually started in Europe, which has a terrible, terrible gum problem from what I understand. The city of New York hired that European company to clean up its streets and sidewalks, and it was featured on Discovery Channel's show Dirty Jobs. That's how we found out about it. We're a franchiser now, and we only started the business seven months ago.

What are your fees?

For 500 square feet it'll be a couple hundred dollars. We have to look at the coverage, but it usually works out to be $85 an hour.

Not bad! Do you have a nickname for these splotches?

Can't we live with a little gum on our streets?

Yeah, sure. But it is a real underfoot problem.

And you say you're a "green" company?

Yep, we leave nothing behind except for maybe a steam spot. There's no nasty odors, no chemicals, nothing that can't be around pets. We did a job for a corporate park recently, and there was a pond with swans in it right nearby, so that tells you it's safe.

Beaufort, Missouri, teenager Mitchell Hults is a hero, and he's been treated like one. In case you've been on a bender the past couple of weeks, you already know that Hults is the teen who tipped off police to a Nissan pickup he saw leaving the scene around the time schoolmate William "Ben" Ownby disappeared, which led to the rescue of Ownby and long-missing Shawn Hornbeck and the arrest of Webster Groves High alum/Imo's Pizza slinger Michael Devlin. For his troubles, the fifteen-year-old Hults was honored with a rally at his high school, a college scholarship and a spankin'-new Dodge truck.

Unreal has read every one of Hults' interviews and seen him photographed from every angle, beaming the whole time. If only his outer beauty matched his inner beauty, we thought to ourselves after seeing Greta Van Susteren have her way with him on FOX. It's not that he's not cute, it's just that his gray T-shirt and camouflage hat (you know, the one with the fish hook glued to the brim) aren't as, uh, media-ready as they could be.

Shawn Hornbeck, after all, got thousands of dollars worth of free duds from Ed Hardy Vintage Tattoo Wear in LA, not to mention an apparent re-coiffing for his appearance on Oprah. It's high time, then, that Hults get his just deserts couture-wise. That's why Unreal is offering Hults a free fashion makeover! St. Louis fashionista Darin "DSly the Style Guy " Slyman is poised and ready to give Hults the Queer Eye for the Straight Guy treatment, complete with haircut, outfit and nose-hair plucking. The whole works. And on Unreal's dime!

"He's a very intuitive kid, and he's total Franklin County," says Sly, "but he's lost in translation aesthetically. If it's our local media, who cares? But if it's national media, there's a stigma about the Midwest, that we're a bunch of podunk hick people who don't know shit from Shinola. It doesn't mean we have to look like that."

Unreal's efforts to reach Hults were unsuccessful, but surely he reads this column, right? Mitchell — you know where to find us!

You buy a $100,000 car, you get some pretty cool features. (That, anyway, is what Unreal has been told.) Cool, but complicated. So complicated, in fact, that rich people have a hard time figuring out how to use them.

Which is why Mercedes-Benz of Progress Point makes free housecalls.

Potential features include a navigation system, Bluetooth technology and something called an iPod Integration Kit that allows the driver to control his iPod through the steering wheel.

"Some of the older customers don't even know what features they have," says Roy Dreiling, a "product delivery specialist" who spends up to four hours with new Mercedes owners helping them to learn how to operate their cars. "They're forced to read the owner's manual! At this price range, they shouldn't have to do that."

Unreal caught up with Dreiling to find out what life is like on the other side of the tracks.

Unreal: Who buys these cars?

Roy Dreiling: I just left the house of the guy who founded Reddi-wip. I meet some of the most interesting people.

You say some people can't figure out how to change CDs. Is it possible the rich are dumber than the rest of us?

One guy was having his son come out to the car and change the CD whenever he wanted to listen to new music. The CD player could be in the glove box, or it could be in a dash that's hidden. There are also some systems that are voice-activated. You just call out the track you want.

Have you ever had a customer who really couldn't grasp this stuff?

Yes, but I'm patient. People just sigh in amazement as we go over this stuff. I just repeat: "Life is good." I reassure them, keep telling them they can get it. We just work through it together. Eventually most of them get it. You see it in their faces. They get this look.

Recent Highlight (January 19): In a stunning move by [Albemarle, Virginia] County, we've recently been notified that the elementary school will discontinue crossing guard services. The Albemarle County Police Department says that it is illegal for anyone other than a uniformed police officer to direct traffic.

I haven't been this riled up since my neighbor tried to weed my garden.

The crossing guard is a time honored icon. Where will the frame of reference for all those cold medicine and soup commercials go, if we lose our crossing guards nationwide? Who else will wear day-glo orange and assert an authoritative presence outside our neighborhood schools? We chose our home, in part, because it is close — within walking distance — of the elementary and middle school. This seemed like a huge plus to us. Walking is healthy! Now, though, because of the discontinuation of the crossing guards, the schools are providing bus services for all walkers, meaning the girl will now walk about seven houses down the street to catch a bus that will drive her across a street and into a parking lot. [...]

I did a little research this evening (which means a friend of mine called her brother who is a cop) to find out what crime I might be charged with (hypothetically) were I to help schoolchildren cross the street come Monday, when this all goes into effect. The brother (not an Albemarle officer) said the offense would be "obstruction of traffic" and probably ticketable. If a person were to persist, then he or she could be arrested.

Time to pick out an outfit that will stop traffic for Monday.

Know of an Unreal-worthy local blog?
Send the URL to unreal@riverfronttimes.com.