Over the past few years, audiences in and around the Grand Center arts district have gotten a generous taste of Brian Owens' talent; his tributes to various soul legends — Marvin Gaye, Curtis Mayfield, Donny Hathaway — have had 'em dancing in the aisles of Powell Symphony Hall, the Sheldon and Jazz at the Bistro. A forceful and graceful soul singer who can navigate his upper register with elegance, Owens' voice is an apt vessel to keep the soul tradition of the '60s and '70s alive.

But when Owens turns his efforts to his own compositions, the results are no less striking. He is able to reference classic soul music with all the trappings of a vintage Stax Records release, but he refuses to hide his gospel roots under a bushel. On the recently issued Beautiful Day EP, Owens and his group the Deacons of Soul turn out four songs that, while rarely overtly religious, are always pointed heavenward. 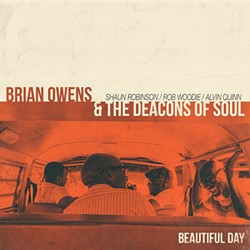 "To be honest with you, everything that I do is gospel, in a sense of where it comes from and where it's pointing to," says Owens. "And the themes that I find myself performing that are not overtly gospel have an air of being in a parable form.

"I'm not the first artist to do stuff like that," he continues. "I've been really listening to Mavis Staples and the Staple Singers — they never stopped being a gospel group. It gets to the intent, and then the content that comes from your intent."

On the title track, Owens soars over spry piano and communal handclaps as he sings of hopefulness against long odds. The song's composition references a few of Owens' soul forebears: The Staples' godly optimism is present, as are Gamble and Huffs' regal strings and Curtis Mayfield's trebly guitar. "When I write my original stuff, I'm not sampling or copying, but I have influences that are in my head," says Owens.

The loose grooves and burbling funk of "So High" seek a similar kind of transcendence as the title track, though the street-band arrangement and turgid strings provide a darker, almost ominous tone. The song owes more to Marvin Gaye and his What's Going On album, a touchstone that Owens also incorporates in his ongoing "Marvin Gaye Experience" show. For Owens, a Ferguson native, Gaye's incorporation of social commentary amid smooth soul music is an inspiration.

"The way Marvin talked about social issues was so ingenious and so beautiful. It's the most beautifully written statement of social construct and humanity that we've ever had," he says of What's Going On. "I wanna write something that has that impact.

"I think that activism and calls to action can take on very different narratives, some militant and some non-militant," he continues. "That's what music is for; music has to be the vehicle. That's what I love about Curtis [Mayfield] — he could say some really heavy stuff, but the music was so good that you don't really know it. Sometimes it's good to hide these truths in a great melody; it gets into people's spirits."

Beautiful Day does feature a cover song, though it doesn't come from the soul catalogs Owens usually mines. "Desperation" is a Steppenwolf song from the rock band's 1968 debut LP, and on his version Owens partners with his father, Thomas Owens, for a song of unity amid spiritual crisis. It's a brilliant bit of crate-digging and a nod to Owens' expansive definition of soul music.

He's also incorporated tributes to Johnny Cash in his repertoire, an inclusion that seems like an unusual choice.

"They all know 'That Old Rugged Cross!'" exclaims Owens when asked what unites artists like Cash, Gaye and Mayfield. "I broadly define soul music. You can define it as a genre, you can describe it as a method or way of interpreting music. Johnny Cash was a soul artist — a song like 'Man in Black,' there's a lot of blues in that, and there's certainly a lot of gospel. To me, the soul of soul is gospel."

The Beautiful Day EP is a teaser of a full-length to come later this year (the LP is already out in Japan, where Owens' soul music has found an unexpected fan base). Owens decided to delay the U.S. release to go back into the studio and include tracks that reflect "a deeper representation of where I am as an artist," he says.

"This record is me finally accepting who I am as not being a liability in what I want to do," says Owens. "I'm a church guy so much that it's not a place I go to; it's a part of who I am."

Stream a track from Beautiful Day below: