Café Brasil is Carnaval for your palate 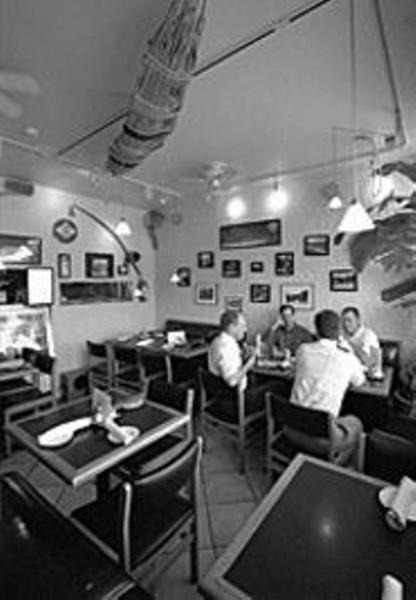 "There's so much you can do with a one-bedroom apartment," warbles Barbara Harris' cheery social-worker character in the film A Thousand Clowns. She's referring to the ratty, cramped apartment occupied by Murray Burns (Jason Robards), with whom she falls in love while investigating the living arrangement between the unemployed writer and his gifted teenage nephew. She could just as easily have been referring to Café Brasil. Compared to Café Brasil, Murray's crib is downright palatial. But the restaurant proves Harris' point: A ceramic-tiled dining room, stringed instruments strategically hung from the ceiling and piped-in Brazilian music combine to transform the storefront into a little oasis.

Open since November and situated in the unlikely location of a small strip mall on the corner of McKnight and Manchester roads, chef-owner Jorge Carvalho's tiny -- or as some like to call it, "cozy" -- restaurant seats just 25 lucky diners at 8 tables, which the lone waiter efficiently slides around like a thumb puzzle to accommodate various-size groups. Those longing to be among the fortunate few must wait either outside, pacing up and down the sidewalk, or hover inside near the door, practically breathing down the neck of those sitting in the booth nearest the entrance. (Happily, the initiated are sensitive to the constraints. They're well aware that this is not a place to linger over a meal; it's a type of restaurant etiquette not unlike the switch that's flipped in your brain when you've rambled on too long in a conversation.)

Café Brasil is St. Louis' second Brazilian restaurant (there's also Yemanja Brasil on the south side, and rumor has it that a Brazilian steak house will open soon in Dogtown) and a welcome addition to a town dominated by Asian and Italian eateries. While Yemanja Brasil boasts a broader menu and hipper ambiance, the steady lines at Café Brasil show that St. Louis can support more international food options. Or maybe it's our lust for caipirinha, that citrusy, summery drink made with fresh-squeezed limes, sugar and the rumlike spirit cachaça and served on the rocks ($4.95). Some call it Brazil's national drink; in any event, after a couple of these potent, easy-drinking cocktails you can see why the Portuguese met such little resistance when they landed on Brazil's shores back in 1500.

The menu, hand-lettered in calligraphy and photocopied on thick paper, offers eight entrées: three seafood, two chicken, one sirloin steak and one vegetarian, plus feijoada, the traditional Brazilian stew. The descriptions take up the entire page, leaving no room for appetizers and desserts, about which patrons are instructed to ask the server. Appetizers are described in short order: There's only one. Pasteles are small pastries, like round empanadas, only with a thinner crust. There's a choice of fillings -- cheese, or shredded chicken or beef -- that are blended with a tasty blend of diced tomatoes and herbs. At a buck-ninety-five a pop, it would be easy to fill up on these savory morsels. Don't.

The small whiteboard near the kitchen's open window describes the night's specials, usually a grilled cod or steak. But a first visit should include feijoada (pronounced fay-ZHWAH-duh). To a Midwestern palate, this thick stew may seem more appropriate to a winter's day, but move beyond that mindset and you'll be rewarded with a combination of intense, pungent flavors. A small cast-iron cauldron arrives at the table, steaming with rich fragrance; chunks of cured beef, disks of sausage, bacon and black beans simmer within. On the side: a big plate brimming with mounds of fluffy white rice, yuca flour, ribbons of gently sautéed collard greens, thick slices of cooked carrots and yellow squash and a slice of orange. Ladle on as much stew as you want, mixing together whatever combination hits your fancy, and wait a moment for the flavors to settle in your mouth: Tangy, with a hint of spice emerging to fill the nostrils. (To my taste, yuca flour -- a South American staple also known as cassava and, in Brazil, farofa -- adds nothing but a grainy, crunchy texture, and the dish already has plenty of texture.) Dark Xingu beer ($4) or a glass of light and spicy Grao Vasco red wine ($5) pairs well, though the latter tends to be served too warm, probably owing to the kitchen's heat and the tropical climate in the dining room.

The special on one visit was grilled cod with a tomato chantilly sauce ($15.95). The fish was fresh-tasting and nicely grilled, but although "chantilly" conjures images of a cream sauce, this came with a simple white-wine sauce enriched with butter and some diced tomatoes. Good nonetheless. Camerao ao molho branco, meanwhile, comprised ten large shrimp sautéed in olive oil and garlic and finished with a light white-wine cream sauce. Vatapá de frango (chicken breast in a cashew-nut gravy) was grilled without a hint of dryness and slathered with its savory cashew sauce. A refreshingly light and spritzy Portuguese Gazela Vinho Verde ($4 glass/$16 bottle) was a good match with shrimp, while a more perfumey, medium-bodied Argentinean Alta Vista Torrontes ($6/$20) stood up to the richness of the chicken dish.

All dishes are accompanied by the same sides that graced the feijoada, like Carnaval on a plate: festive, vibrant colors of yellow, green and white. (If they could figure out a blue food, you'd have the flag of Brazil on your dish.) Entrées also come with a salad of romaine and iceberg lettuces, hearts of palm, tomatoes and olives, dressed in a slightly sweet vinaigrette.

Café Brasil's wine list is small (five reds, five whites), but it's a selection of Latin American wines you may not find elsewhere, priced from $4 to $7 a glass and $16 to $28 a bottle. You can even order Mateus white, which I haven't seen since my parents bought it in the '70s. Beers get little respect, with choices limited to the dark, tasty Xingu, Bud and Bud Light. Desserts (all $3.95) are simple affairs, consisting of an unusually thick and light (about two inches!) flourless chocolate cake, a tasty but thick and grainy flan and a coconut custard.

Jorge Carvalho is visiting his native Brazil, and according to his wife Rachel, he might remain there for some time, owing to an impending strike at the nation's federal building. A planned expansion into the storefront next door to the restaurant -- which would nearly double the dining space -- has been postponed indefinitely, she says.

And maybe that's okay. After all, there's so much you can do with a one-room restaurant.