Sisters Is a Rare and Refreshing Take on Women Behaving Badly 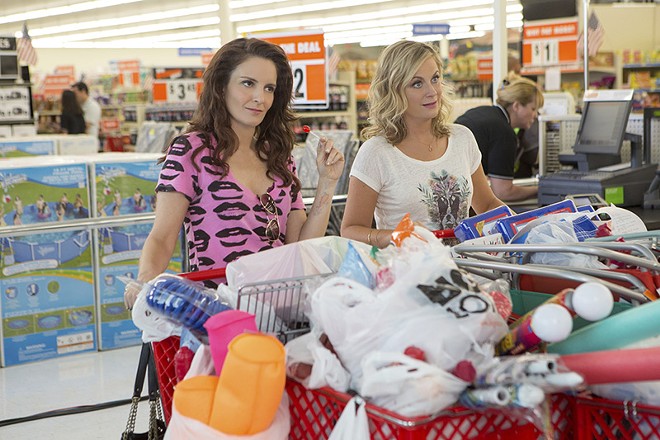 Hooray. Yay. Yes. This. So much this.

Women behaving badly. Women refusing to grow up. I mean, I would love it if "the movies" reverted back to the days of Bringing Up Baby and The Thin Man, with men and women actually believing that forty-something is cool, and dressing for dinner and having cocktails at six and solving mysteries and secretly aiding the resistance and such. But if that's not going to happen, and movies are going to be overpopulated by manchildren playing video games and ogling bikinis and wallowing in haphazard celebrations of adolescent testosterone, then it's only fair that women get equal time and aren't expected to be the responsible ones while men have their fun.

So hooray and yay for Sisters. Because now Tina Fey gets to be the womanchild: she throws a for-real kicking-and-screaming tantrum like a toddler, like an actual brand-new person who has not yet mastered bladder control, which is so absurd that you're convinced it has to be going extra lengths to be a joke, a send-up of how juvenile men are in films like this. Because now Amy Poehler gets to be self-centered and selfish in a uniquely feminine way. Mini spoiler, not really: it's about going overboard in being the "good" girl and the "good" sister and the "good" daughter, and how damn self-congratulatory -- and also self-negating, which for approved values of womanhood is allegedly a positive thing -- that can be. And there's a particular sort of relief in seeing this notion of "appropriate" womanliness being sent up. Like: yes! Someone sees how ridiculous this is. Someone sees how not-positive for women this is. Someone recognizes how this is abdicating adulthood, not embracing it.

Already Sisters has got it all over any Adam Sandler movie, which never sees how problematic forty-something men behaving in stereotypically-approved-yet-idiotically-stupid ways really is.

Not that the plot really matters, but Kate (Fey) and Maura Ellis (Poehler) are the titular sibs who've just discovered that their parents (Diane Wiest and James Brolin) have sold their childhood home in Orlando. They decide that this is the one-last-chance for Maura, ever the Responsible One, to have the blowout party she never had in high school. So when the women are supposed to be clearing out their shared childhood bedroom (Mom and Dad have already moved into their new hip retirement community), they are in fact throwing a huge party, to which they have invited most of their former high-school friends and a new few new neighbors, and definitely do not invite their former high-school enemies, who of course show up anyway.

And thus Sisters ends up a mix of sweet nostalgia -- Maura kissing the Family Ties-era poster of Michael J. Fox in their stuck-in-the-'80s bedroom is genuinely lovely -- and just a little bit of gross out that the movie could have done without (and been much stronger for it), but it's not too much so it's okay. Instead, as wonderful payback for women moviegoers who have been putting up with overgrown boys for too long, there is some peculiarly womanish humor. When Maura worries about not wearing the right bra to get her flirt on, that is a real thing that is very wise and funny about the things that women worry about. There are men as eye candy and objects of desire: Pro wrestler John Cena, as a drug dealer Kate likes, follows on from his appearance in Trainwreck with another instance of sending up his almost cartoonishly overly pumped-up masculine image. And -- as all wise dudes and women know -- men who are comfortable making fun of themselves are extra sexy. And then there is James, the charming and funny Florida neighbor, who Maura likes and is played by Ike Barinholtz, who looks like a lost Wahlberg cousin but is apparently no relation at all. Maura shares a moment of vulnerability with him at the party that is so raw that it made me sob with its shrewdness. I get very worked up when women get to be screwed-up people onscreen. It's so rare!