MABEL SUEN The half-rack of marinated fire-roasted pork, served here with kachumbali and rice, stands up to the best barbecue in St. Louis.

Christine Mukulu Sseremba didn't know if she had it in her. Opening a restaurant wasn't daunting only for the usual concerns — long hours, grueling work, physical strain. She had other reasons, ones that almost kept her from opening Olive Green International Cuisine, rebranded in February as Simba Ugandan Restaurant.

Her distress stemmed from the loss of what she thought was her life's work, a situation fraught with politics and corruption that had led her from Uganda to the United States as an asylum-seeker in 2011.

In her native Kampala, Sseremba knew what she was meant to do. An actress, entrepreneur and MBA graduate, she was troubled by her fellow Ugandans' lack of access to information technology. Though the government issued lofty targets for computer literacy, schools were not equipped with computers, and access to the internet was a privilege for the elites. Though she did not have an IT background, Sseremba started a program to bring in refurbished computers from other countries, providing training and a physical space to use the technology.

The problem was her location, a plot of land in a choice part of town that the Ugandan president's brother wanted for his own. She says he illegally seized her land and, when he realized she would fight back in court, demolished her headquarters. Sseremba didn't even know it was happening until she got a call explaining that her nemesis had come in the middle of the night, surrounded the property with sheet metal and proceeded to destroy it. Everything she'd worked for was in the building, all of it reduced to rubble. 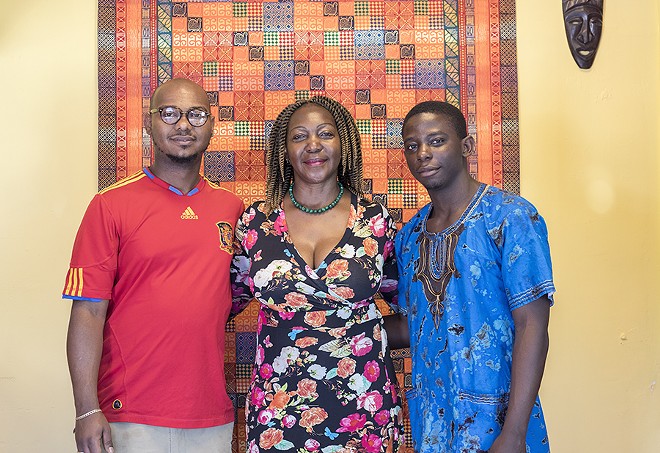 Devastated and fearing for her safety, Sseremba sought refuge in the U.S., where she was finally granted asylum four years later, in 2015. Her heart was broken, not just from watching her life's work be destroyed, but from her belief that she had somehow failed those who needed her. In her darkest hours, she thought she could literally die from a broken heart.

Then she started cooking. Though Sseremba had always been a passionate home cook, she'd never really thought of it as a career, especially after a few bad experiences in the restaurant business back home soured her on the industry. However, she loved cooking and found herself bringing a virtual Ugandan feast to her new St. Louis church one Sunday after noticing that the parish priest had nothing to eat but cold leftovers. He was impressed, as were the parishioners, and news of her cooking prowess began to spread.

Sseremba began cooking at events around town, such as the Festival of Nations and the African Arts Festival, where, to her surprise, her food was a tremendous hit. Patrons asking where they could find her food were shocked that she didn't have a restaurant of her own. The demand prompted her to open her Olive Green International Cuisine in University City's Jeffrey Plaza in 2015. 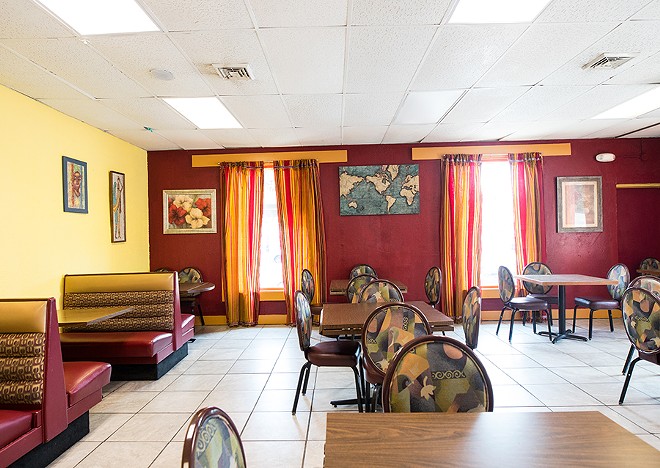 Though Olive Green was fairly successful, Sseremba didn't feel like it was the right concept. Prior to opening, she had participated in a business-mentorship program where her adviser discouraged her from calling her restaurant African, let alone Ugandan. The "International" moniker, however, was a source of confusion for guests. It also failed to capture the spirit of Ugandan cuisine, something that was important to Sseremba.

This February, together with her sons George and Majesty, Sseremba relocated from Jeffrey Plaza to a stand-alone building across Woodson Road and changed the restaurant's name to Simba Ugandan Restaurant. The three have transformed the space, previously home to Taqueria La Monarca, into a bright, festive restaurant with yellow, red and green walls, red curtains, Ugandan artwork and contemporary African pop music videos on TV.

The pulsing music is transportive, as are the powerful flavors that come out of Sseremba's kitchen. Sumbusas, akin to samosas in other parts of the globe, are golden, triangular pillows, filled with potatoes, lentils and carrots and perfumed with earthy spices that call to mind yellow curry. The dough is perfectly fried, maintaining a thin, crisp exterior that yields to delicate dough akin to a funnel cake before the vegetable middle. They are extraordinary. 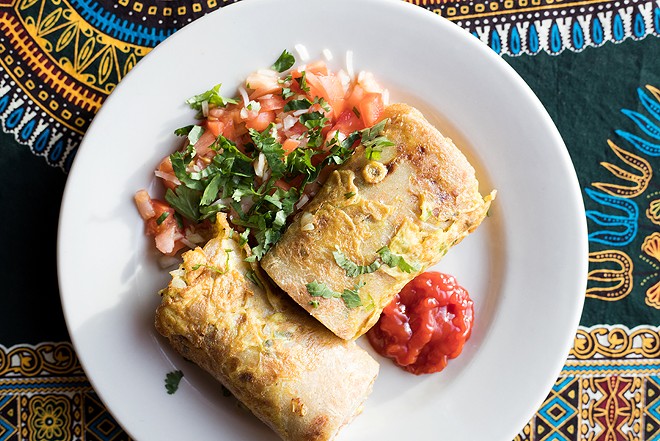 Chapati, a thin fry bread that is like a cross between naan and a tortilla, works both on its own and as a delectable way of soaking up Simba's various curries. The bread is also the main component of the "Rolex," a fried roulade of bread, vegetables and egg. The texture is tougher than the plain chapati, and though there are additional flavors, it is also less seasoned. According to Sseremba's sons, this is a ubiquitous Ugandan street food. Regardless, I preferred the plain chapati.

Pan-fried beef is intensely seasoned, with a spice blend somewhere between red curry and a black-peppery Memphis barbecue rub. The cut Sseremba uses is a bit tough and gristly in some parts, but she cuts it into pieces and cooks it slow enough to soften the texture. Slivers of white onion and green peppers soften in the meat's juices, forming a thick pan sauce. Every bite reveals an additional flavor — cumin, thyme, garlic — made more potent when paired with a side of pilau, a Ugandan fried rice. This is not just ordinary fried rice, however. Sseremba first blooms a virtual spice rack of seasonings, adds vegetables to it and then mixes in uncooked rice so that flavor infuses as it cooks. Paired with the beef, it's otherworldly. 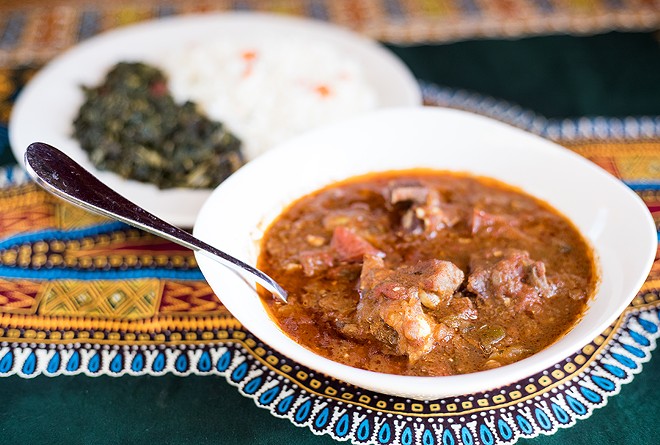 Curried goat, one of Simba's most popular dishes, also benefits from Sseremba's ability to layer flavors. The goat is slow-cooked in a thyme- and rosemary-forward sauce, which both softens the meat and eliminates any gaminess. As it cooks down, the sauce thickens, forming a rich, herb-infused gravy. If this is your first experience with goat, it will not be your last.

It is not, however, Simba's most unique dish. That honor goes to a platter of bananas covered in groundnut sauce. A legume in the peanut family, the groundnut here is crushed and stewed, forming a thick sauce that tastes like the vegetal liquid leftover from cooking beans. If that sounds unpleasant, it isn't. The sauce complements the bananas, which present as savory after being slow-cooked with tomatoes and onions. Western palates may have a hard time wrapping themselves around the unfamiliar flavors. However, it's an experience I enjoyed exploring. 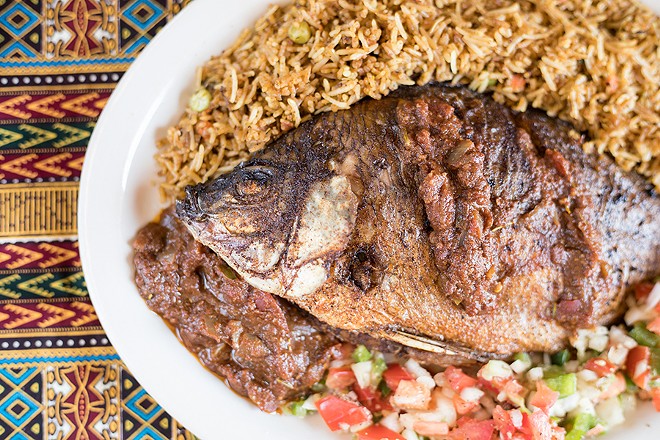 Simba's smoked meats are good enough to compete with the big players in the city's crowded barbecue scene. Roasted pork ribs are coated in a powerful spice rub and smoked until the meat develops a wonderful crackling skin. A roasted quarter-chicken is simply outstanding, its succulent meat kissed with herbs, pepper and smoke. It's a simple pleasure, but among the best roasted chickens I've ever eaten.

I'd wait from here to eternity for that chicken. And I almost had to. A meal at Simba is not quick. In fact, the leisurely pace can be vexing, and it appears to be systemic. On a dinner visit, food came out slowly and piecemeal — an entrée here, an appetizer there — and the guests across from us waited about 30 minutes for their appetizers. Lunch was no different. Though the restaurant opens at 11 a.m., the doors weren't even unlocked until 11:20, and there was no food on the buffet until almost noon. But, hey, it was better than when a friend of mine dined at Olive Green two years ago and the buffet wasn't ready for an hour and a half. Baby steps?

Other restaurants wouldn't get away with such pacing, but there's something about Simba that makes time seem irrelevant. I can't decide if it's the way the restaurant's vibrant decor and upbeat soundtrack make you feel like you are in an East African bar, that, absent a liquor license, you can bring in your own six pack and throw back beer to your heart's content or that once the food arrives, it's searing hot and utterly delicious. It's probably a combination of the three.

But more so, you root for Simba because you root for Sseremba. After all, if it took her four years to mend a broken heart and put herself out there again, I can wait twenty minutes for a sumbusa — even if they're so good that doing so feels like torture. 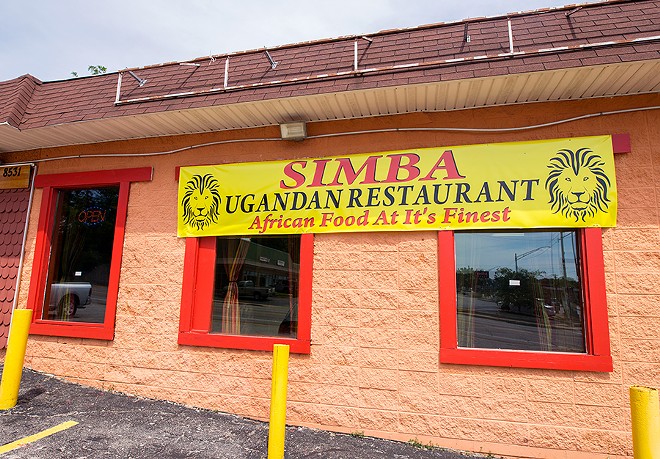