Seth MacFarlane's Ted is stuffed with more of the same 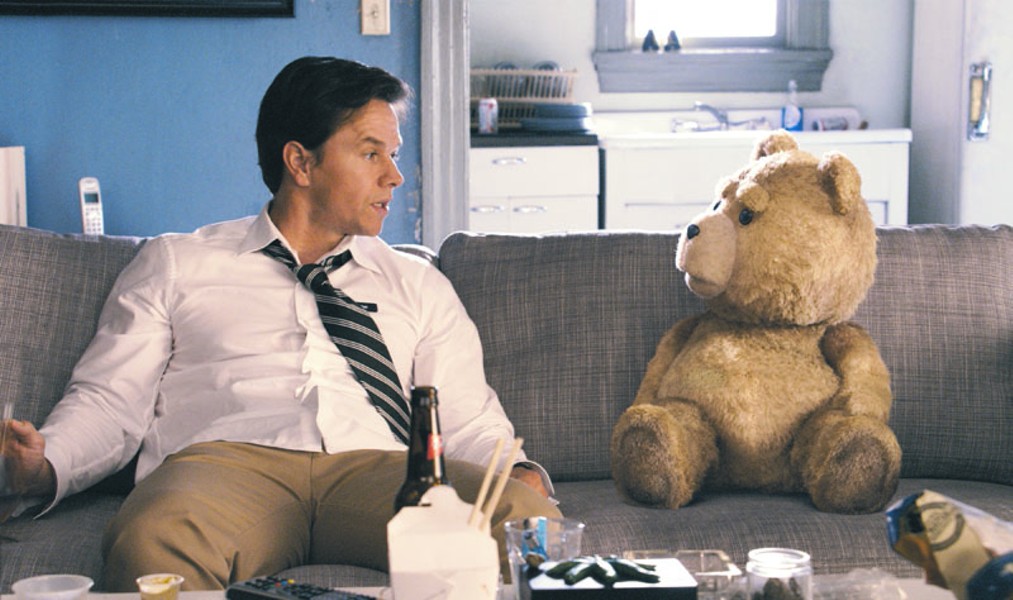 Universal Pictures Mark Wahlberg hangs out with his best friend, Ted (voiced by Seth MacFarlane), in the live-action/CG-animated comedy Ted.

Seth MacFarlane's Ted is stuffed with more of the same

Fans of Seth MacFarlane's FOX mainstay Family Guy who wish he would run afoul of FCC regulations every week might be pleased with Ted, the story of a 35-year-old man and his foul-talking teddy bear. Plushies, too, might be turned on by the pot-smoking, whore-banging CGI toy ursus of the title, voiced by MacFarlane, making his feature-directing debut, which he co-scripted with Family Guy writers Alec Sulkin and Wellesley Wild. Other specialized demographics — namely, anyone over fifteen who can't claim membership in either of the above groups — might sit in the theater in stony silence.

The film begins in 1985 — the middle of the decade whose pop-cultural detritus will be fetishized continually in Ted — when eight-year-old pariah John Bennett wishes upon a Christmas-night star that his new, cuddly gift could speak. A montage during the opening credits highlights three decades of their insoluble bond: The now-talking Ted rises and falls from beloved Johnny Carson guest to louche celebrity washout; scrawny John becomes Mark Wahlberg and starts dating Lori (Mila Kunis). Kunis' role isn't developed much beyond those quick, silent intro shots: Once tirelessly understanding of the relationship between her layabout boyfriend of four years who can barely get to his rental-car job on time and his long-time comfort object, Lori now demands that Ted move out of the Boston apartment the three have been sharing so that John will finally grow up. The man and his toy might now have separate addresses, but Ted can still activate John's id, encouraging him to break a date with Lori on the promise of snorting coke with Sam Jones — Flash Gordon himself.

Ted's overextended, desultory 104 minutes — which include a kidnapping, a car chase, a set piece propelled by Tiffany's "I Think We're Alone Now" video and a Norah Jones concert — also operate on the premise that audiences can't resist having their baser instincts appealed to over and over again, especially when the filthy talk, gay panic and racist jokes pour forth from as dissonant a figure as a stuffed animal. But does the bear really look that dissimilar to — or function that much differently from — Seth Rogen, Jonah Hill, Jason Segel or any other round-bellied bad influence from movies made under the sign of Apatow during the past five years? Like its buddy-movie predecessors, Ted has a soft, squishy ending, one meant to vindicate Lori, even if the film has so little use for Kunis — or any female who doesn't want to spread her legs for Ted.

It's dispiriting enough to witness Kunis still waiting for a comic lead role worthy of her. But the usually nimble Wahlberg — who at least has one great moment rattling off "white-trash girls' names" — suffers the most, playing second fiddle to a knee-high Gund knockoff. 

Ted is not showing in any theaters in the area.