Christopher Nolan's ponderous, pontifical action movies are written less as screenplays than as operator's manuals, guiding an audience through assembling their important themes while scrupulously making sure you don't miss a thing. This is as true of Inception, with its reams of expositional walk-through, as of Nolan's superhero saga, now swollen into a trilogy in which the dramatis personae are always stepping up to identify themselves in statements of principle. All of the on-the-nose speechifying (scripted by Nolan and his brother, Jonathan) keeps the runtimes long, while the drum-tight rule of schematic relevance shuts out anything resembling wit, spontaneity, and recognizable human conduct.

Billed as director Nolan's final contribution to the franchise he revived with 2005's Batman Begins, The Dark Knight Rises opens eight years after the events of 2008's The Dark Knight, eight years after the death of Harvey Dent, a/k/a Two-Face, still honored as a hero through the print-the-legend contrivance of Commissioner Gordon (Gary Oldman, returning), and eight years after the villainized, fugitive Caped Crusader was last sighted in Gotham City, which has settled into a fragile peace. Bruce Wayne (Christian Bale) has hung up his Batman suit and become a Howard Hughes–like recluse, only lured into the world again by a couple of women: a socialite investor in Wayne Enterprises' clean-energy programs, Miranda (Marion Cotillard), and a cat burglar who penetrates his sanctuary, Selina (Anne Hathaway, repeatedly proving the "No-fun" Nolans' ability to make comic-relief one-liners fall flat amid their sepulchral, master-builder cinema.)

The overarching theme of the Batman films is the moral problem of vigilantism, as played out by name-tagged figures of virtue and vice. "The idea was to be a symbol," Wayne says of his anonymous alter ego in The Dark Knight Rises — and so this most solemn of superhero franchises duly marches ahead with the process of ominous signification, having established itself among those who accept its self-regard at face value as not just another blockbuster but the multiplex State of the Nation for the 21st century. If The Dark Knight openly invited interpretation as the War on Terror Batman, then The Dark Knight Rises, whose creators obviously scented the class discontent in the air, is the Occupy Wall Street installment. "You think all this can last?" down-and-out survivor Selina says upon meeting Wayne at a fancy-dress masquerade ball. "There's a storm coming."

That storm breaks in the form of the living incarnation of Have-Not rancor, Bane, played by the hulking Tom Hardy, face indistinguishable behind the ventilator apparatus clamped over his mouth. The visage will remind many of the unmasked Vader, though his fruity, magniloquent purr is closer to Vincent Price talking through a window fan.

Bane was "born and raised in hell on earth" — a pit prison on the other side of the world. In order to punch in Bane's weight class, the softened, fresh-out-of-retirement Wayne will first have to join the 99 Percent, eventually enrolling in the same Third World school of hard knocks that spawned his opponent. Training in dismal, prehistoric conditions trims away the fat of techie decadence and reinvigorates Wayne's sense of the ethical obligation of privilege. If this sounds familiar, it's because Wayne did a similar piece of slumming in Batman Begins. It is also the theme of Rocky IV.

As in The Dark Knight's conflict between Wayne and the Joker, Order versus Anarchy, the face off between Wayne and Bane is a dialectical battle between personified concepts. Wayne is Gotham City's philanthropic chaperone; his company develops technologies with great potential for help and harm, which Wayne then keeps away from a polis that he protects without trusting. Bane is, in posture at least, a radical revolutionist, setting himself up as the champion of the disenfranchised, though it is difficult to imagine who would be seduced by his tactics or his plan "to return control of the city to the people," followed by the neutralization of law and order and the foundation of a Gotham Commune.

For the Nolans, it is characters who voice seemingly utopian goals such as "restoring balance to the world" of whom the most is to be feared. And while The Dark Knight's climax hinged on finding faith in the common man's decency, upon witnessing the goings-on in Occupied Gotham, it is impossible to imagine this revolution accomplishing anything decent — the citizen's tribunal kangaroo court, a fantastic production design flourish by Nathan Crowley, is Reign of Terror by way of Kafka, while a parody of the Bastille is played out before Blackgate Penitentiary. The Dark Knight Rises is not a reactionary movie outright — it would be more respectable if it were — but only on a villainous technicality. The perpetrators of the city-upending mutiny have no interest in a new order, only in seeing Gotham purged in blood with a rote ticking time bomb, an apocalypse that precludes the possibility of revolution either failing or succeeding on its own terms.

The Dark Knight Rises is a shallow repository of ideas, but as a work of sheer sensation, it has something to recommend. At two hours and 45 minutes, it's no fleeter of foot than its plodding predecessors, but Nolan has continued his experimentation with the IMAX format, and the sheer mass of what he has constructed inspires a dull awe — it is impossible not to be cowed by a film that's five stories tall while Hans Zimmer's stampeding orchestra tramples you. As throughout the Batman films, Nolan is at his best symphonizing second-unit footage, illustrating how the shock waves of an assault resound across the infrastructure of an entire city, a coordinated attack on Gotham's pressure points being a particular highlight here. (The city is composed of bits of Pittsburgh and Los Angeles, with New York City for establishing shots, including a half-complete new WTC tower available for suggestive effect.) The history of Batman's burden is, however, increasingly cumbersome, and it's Mr. Bane who finally makes the pertinent point: "Gotham is beyond saving and must be allowed to die."

The Dark Knight Rises is not showing in any theaters in the area. 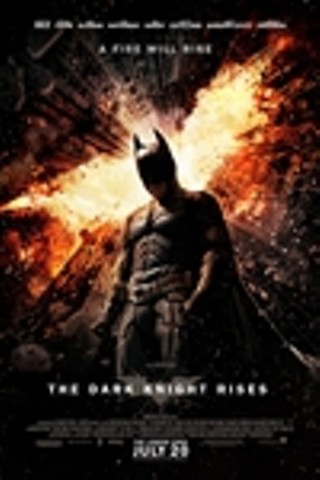