Seek and Ye Shall Find (Maybe) With Geocaching and Letterboxing

JACK KILLEEN Patrick Blindauer and his search partner Penny at an undisclosed site.

It was a gloomy day in Forest Park. I stood a few feet off the John F. Kennedy trail, my head down, kicking leaves. Watching me was Patrick Blindauer (who's published over 60 crosswords in the New York Times) and his dog, Penny. Blindauer pointed at a fallen tree.

I bent down to where two branches made a "V" and rummaged through wet leaves. Beneath was a plastic container wrapped in camouflage duct tape.

There is a world hidden to the unsuspecting eye. It lies in faux screws, ruffled foliage and S.P.O.R.'s (suspicious pile of rocks). To the muggle glance, it is all but invisible. This is the world of letterboxing and geocaching.

("Muggle," as defined by atlasquest.com: "Someone who, for some horrible reason, has never discovered the joys of letterboxing and is more likely to mistake a strange box in the woods as something evil rather than an object of great beauty and joy. A term borrowed from the well-known Harry Potter books where a muggle is someone without magic powers.")

Next time you're in a park, or a restaurant, or City Museum, look around. There may be a letterbox, or a geocache, right there, under that thing.

Or look at the people. Are any of them searching, but not too conspicuously? Do they mutter to themselves, retrace their steps, then perk up and smile? Do their heads spin and their eyes flash, looking for anyone watching? You may have found a letterboxer/geocacher.

Letterboxing and geocaching are like siblings. At first glance, one sees the family face — they're both treasure-hunt style activities that can involve hiking, clue-solving and befuddlement — but upon closer inspection, the differences reveal themselves.

Letterboxing takes a crafty spin on the search-and-find sport. Participants who successfully find a letterbox, which range from "drive-by" (five to ten minutes) to "thru-hike" (fifteen-plus miles) in difficulty, are rewarded with a stamp (don't take it; just use it). Most stamps often hand-carved and wholly unique. For Blindauer, it's as much about making stamps as finding them, if not more. Letterboxers have their own stamps to mark the notebook contained in each letterbox. Blindauer's is an ampersand with a "t" made out of its tail — "St. Ampersand," he calls it. A wonderfully multi-layered meaning, encompassing the St. Louis Cardinals logo, the word "stamp" and Blindauer's love of the ampersand. Penny's stamp is a dog paw. 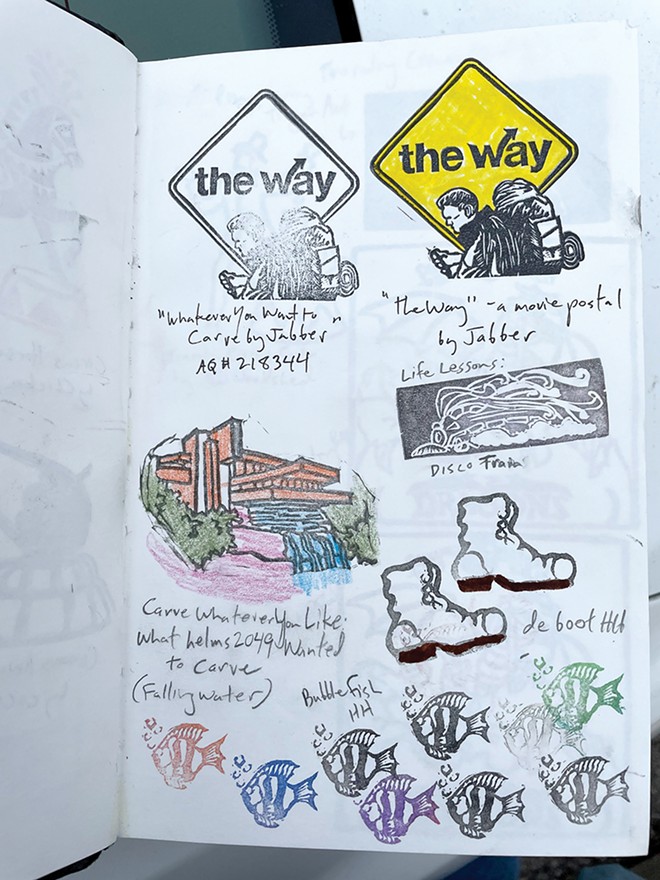 Geocaching offers a clean, what-you'd-expect-in-2021 website, as well as an easy to use, well-designed phone application. Unlike letterboxing, caches don't have stamps. If the cache is big enough, there are trinkets, or "swag," that you're allowed to swap out with an item of your own: action figures, slinkies, a nice glove or whatever will fit. There's a list where you sign your name to feel a sense of accomplishment and having existed in this cruelly forgetful world which pops you in its mouth and chews like a baseball player — you're the sunflower seed — then spits you out on the ground to decompose wet with all the others.

Blindauer and I met in the St. Louis Art Museum parking lot on a Friday morning. He lent me a chunk of a pink eraser and some carving materials with which I made a stamp on the trunk of my car. It was a square, windmill-ish design, something I doodle in the margins of my notebooks. We drove to the southwestern-most corner of the park, my car tailing his, where our letterboxing adventure began.

Six years ago, as an incoming senior in high school, I took a geocaching summer school class. The course promised a P.E. credit, which normally took a whole semester, in five days — a good deal, I thought.

What I remember from that week: rain, heavy, every day; Teacher 1 at the front of the bus saying he never cared much for beer and Teacher 2 replying that, well, it's an acquired taste, like coffee; wading through knee-high water on a trail in Castlewood; hiding in a tower in Lone Elk Park with three other students as we waited for the rain to stop while we ate our lunches, then eventually deciding to brave it; water soaking through my rain jacket and all my clothes; the high of finding a cache after a half hour of scouring dead leaves and fallen logs, occasionally looking up at the branches, thinking no way that bastard put it up there. In a way that I can't explain, it felt like Lord of the Rings.

All that being said, letterboxing was what I expected. The memories and feelings from that high school summer — the searching and the frustration and the light, little excitement upon discovery — came back to me one at a time. "Ah yes, this," I found myself thinking.

You've got to have hobbies, otherwise you'll go crazy expecting everything you do to have a big, great meaning. Go outside, I say, go look for a box hidden in the woods or on a sidewalk a few blocks from your apartment and do it just for fun. Sometimes it's nice to do something meaningless. Meaningless things are fun, too.

Blindauer and I had a good time. We discussed crosswords, Blindauer's five-year-old daughter and that Riverfront Times Art Director Evan Sult plays drums for Sleepy Kitty, and we also found two letterboxes. When I drove off, rolling down the passenger-side windows to wave goodbye, I felt grateful to have met another human and spent an hour looking for notebooks in the woods to mark with a stamp.