Sawhorse Studios Keeps the Music Coming in Its Tenth Year

PHOTO BY KELLY GLUECK "It started off as me being a guy who has the tools to record stuff -- that's really my passion, that's what I want to do."

On a Friday afternoon in early August, Jason McEntire and Chris Turnbaugh are situated behind an SSL mixing desk in McEntire's Sawhorse Studios. The two engineers are digging through the master tapes of a piece of St. Louis music history, preparing a digital transfer of the Dazzling Killmen's album Face of Collapse. Skin Graft Records is reissuing the famed math-rock band's debut as a double LP this November, and McEntire, along with Killmen drummer Blake Fleming, is overseeing the restoration of the original 24-track tapes.

But in the process of transferring the songs, McEntire and Turnbaugh get a peek behind the curtain at the studio tricks and tools used by renowned engineer Steve Albini. Working with the unmixed files is somewhat akin to working off a recipe without measurements — you know the ingredients but not the ratio. On one track, the engineers uncover four different vocal files: two microphones at singer Nick Sakes' mouth, one running through a distorted amplifier, and another mic set halfway across the room. Albini's final mix corrals all these files together, but sifting through the raw data is something of an archaeological dig. For Turnbaugh, the experience emphasizes "the stuff you might not notice, but it made the song what it is."

Such is the magic of studio work: Recording engineers play the role of technical handyman, sonic tinkerer, cat wrangler and band psychiatrist all in one, in the service of executing the artists' vision. It is, by design, a behind-the-scenes operation that results in little more public acknowledgement than a liner-note credit. For McEntire, who has been a recording engineer for more than twenty years, that level of limited visibility is part of the charm. 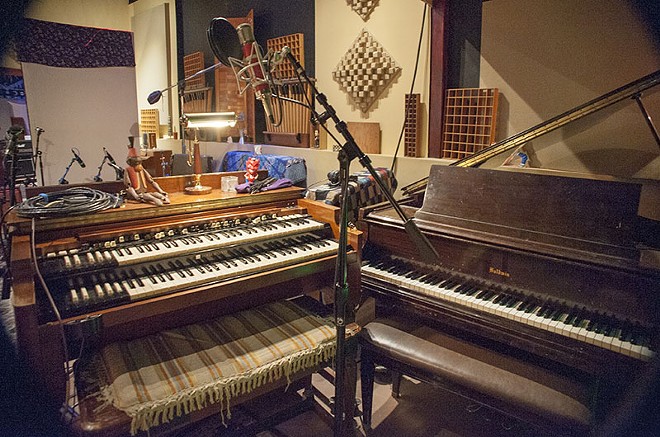 "It started off as me being a guy who has the tools to record stuff — that's really my passion, that's what I want to do," he says.

He'd rather not be seen as a producer, a term that carries a certain puppet-master connotation. His request to bands? "Just spell my name right as the engineer."

Sawhorse is located in a relatively sleepy stretch of south city, near the Dutchtown neighborhood and down the street from the famed comfort-food joint Iron Barley. The building is unmarked, save for its address, and its blacked-out storefront windows obscure the bevy of recording and musical gear inside. McEntire has been at the studio's helm for ten years, having adapted to economic and technological trends that have simultaneously devalued recorded music and made it easier for home-recording enthusiasts to bypass professional studios altogether. His studio has helped some of St. Louis' most accomplished bands make career-best recordings; this year saw the release of Kevin Bowers' ambitious Brazilian music suite Nova, which boasted over a dozen musicians and a revolving door of guest singers.

Last year the Bottle Rockets, perhaps our city's most purely distilled vision of where rock and roots collide, brought in longtime producer Eric "Roscoe" Ambel to record South Broadway Athletic Club at the studio. It was the first time in the band's 25-year history that it had recorded in its hometown. "It was pretty dang nice to work as late as you needed to and drive five minutes and sleep in your own bed," Bottle Rockets leader Brian Henneman told KDHX in December of last year.

While Sawhorse can help a band shepherd its recording from its initial stages through to the mixing and mastering phase, McEntire has embraced a slew of freelance engineers and welcomed them into the space to work on their own projects — home recordists who, as McEntire says, "have their own home spaces but have totally realized that they won't be putting a drum booth in." That flexibility for a freelancer to use Sawhorse's spacious live room to track, say, a rhythm section or a grand piano, then take the files home to tinker with, has helped sustain the studio.

"In the last five years, I've realized that it doesn't have to be me — it's the studio, it's Sawhorse now," says McEntire.

Turnbaugh is one such freelance engineer who had worked for years out of his home, recording local acts like Yankee Racers and Bruiser Queen. He's also a gigging bass player in a variety of acts ranging from technical metal to blues to singer-songwriter material; straddling both worlds has given him perspective on the ease of a basement recording and the relative affordability of recording at a space like Sawhorse.

"It's gotten way cheaper to make records in general, which I think is a beautiful thing because you've got all these bands when there was a time where, if they wanted to be heard by a large audience, they had to be signed," says Turnbaugh. "But I think if you look around St. Louis at the amount of musicians and the amount of studios going on, there's still a big argument for coming into a place with world-class gear."

That gear is a big part of Sawhorse's appeal: Across the complex's three studio spaces, McEntire and a slew of other engineers have amassed enough instruments, microphones and pre-amps to make a seasoned gear-hound's knees buckle. Studio A's live room currently houses a Baldwin baby grand piano, a pair of Hammond B3 organs and a few vintage Marshall, Ampeg and Silvertone amplifiers.

Turnbaugh, likewise, has benefitted from the influx of engineers working in the space, looking over the shoulders of McEntire and Jones as they work. "Everybody that works here is community-minded," he says. "It's just a really creative, supportive vibe."

As Sawhorse celebrates its tenth anniversary this year, McEntire reflects on the changing face of the larger music industry and his studio's ability to weather those changes.