How Sarah Kendzior Became the Prophet of Flyover Country

Sarah Kendzior is writing. It's March 29, and the St. Louis-based scholar of despots and demagogues is absorbed in her notebook. A tumble of dark blonde hair rests in a pile on her shoulder, stirring with the motion of her pen as she jots down a response to a speech she hasn't heard yet. Around her, the conference room stirs with coffee-powered chatter from the sort of people who attend a 7 a.m. symposium to hear two pundits talk about Donald Trump.

One pundit is Kendzior, and, by now, there are things an audience is virtually guaranteed to hear in a Kendzior speech: that Robert Mueller isn't going to save the country. That democracy is threatened by the "normalization" of propaganda and corruption. That Donald Trump is turning the White House into the headquarters for a "transnational crime syndicate masquerading as a government."

But Kendzior doesn't have top billing at today's Seventh Annual Public Values Symposium, advertised with the tagline "Being a change agent in a divided nation." The keynote speaker at this event, held on the campus of the University of Missouri-St. Louis, is commentator Bill Kristol, who helped shape three decades of Republican politics before he struck out as a leader of the "Never Trumpers," the gang of conservatives who attempted to stop their own party's nominee in 2016. Having failed, Kristol often plays the conservative role on liberal favorite MSNBC. For the most part, when he talks, it's not conservatives who are listening.

Instead, the liberals he's speaking to take their cues from Kendzior. It's not just her nearly 500,000 followers on Twitter. A regular on MSNBC's weekend morning show AM Joy, she is also the author of a best-selling essay collection and co-host of a hit political podcast. Her essays become viral posts, her words transplanted into memes and hashtags.

It wasn't always so; there was a time when Kendzior's apocalyptic warnings about Trump were written off as over-the-top conspiracy mongering. Then Trump won, and his government started locking up kids on the border. No one swooped in to save the day. He wasn't checked or balanced. Kendzior warned that we were halfway to an authoritarian state, and a swath of the country didn't just applaud. They donated money to Kendzior. They bought her book. They invited her to speak at symposia.

In his keynote address, Kristol, who once served as an adviser and chief of staff to Vice President Dan Quayle, is unfailingly reasonable. The nation may be divided, he remarks, but he remains confident in the survival of the system. "One of the big stories of the Trump years, for me, is the strength of American institutions," he says. 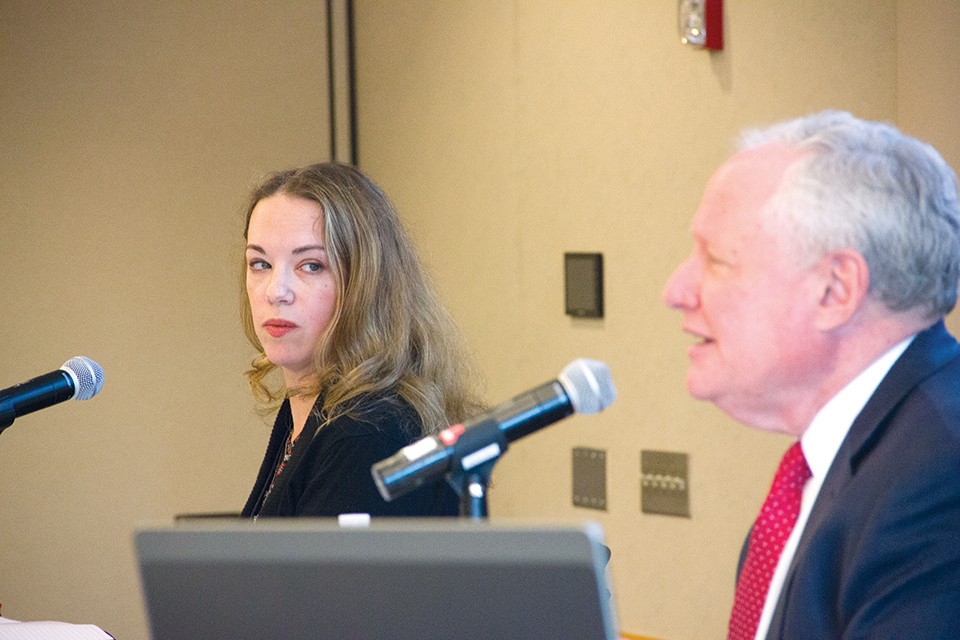 For a moment, the remark disengages Kendzior from her notebook. She spares a glance at Kristol as he praises the "massive infrastructure" of American institutions "that check the damage a demagogic president can do."

"We are not Hungary," he continues reassuringly. "We are not Venezuela. We are not a place where, if you get a bad president, he can corrupt half the judiciary, take over half the media, tell the universities what to teach."

It's a perfect example of the sort of patriotic trust that, in Kendzior's view, is hastening America's fall to brutalism and autocracy. When she takes the podium after Kristol, she is biting in her opinion of America's institutions, presented by Kristol as a bulwark in a nation momentarily weakened.

To Kendzior, that perspective is a mirage, and worse. She tells the crowd, "Belief in American exceptionalism is what got us here."

To agree with Kendzior is to accept a very unpatriotic idea: that America's exceptional past stopped offering reassurance the moment Trump took office. It is this American present that Kendzior tried to warn the world about, a place where values are fungible, truth is marketable and despotism is a shadow creeping across the landscape.

It is a shadow Kendzior saw early, not in Washington or in Moscow, but in St. Louis. It was here, in flyover country, that she perceived a new American future — not the dawn of a better era, but a dwindling. The cataclysm was reflected in the economic desperation of a city wracked by inequality and failed promises of recovery.

In St. Louis, everything Kendzior had seen and studied in her life came into focus. It was here that she first wrote the words, "We live in the tunnel at the end of the light."