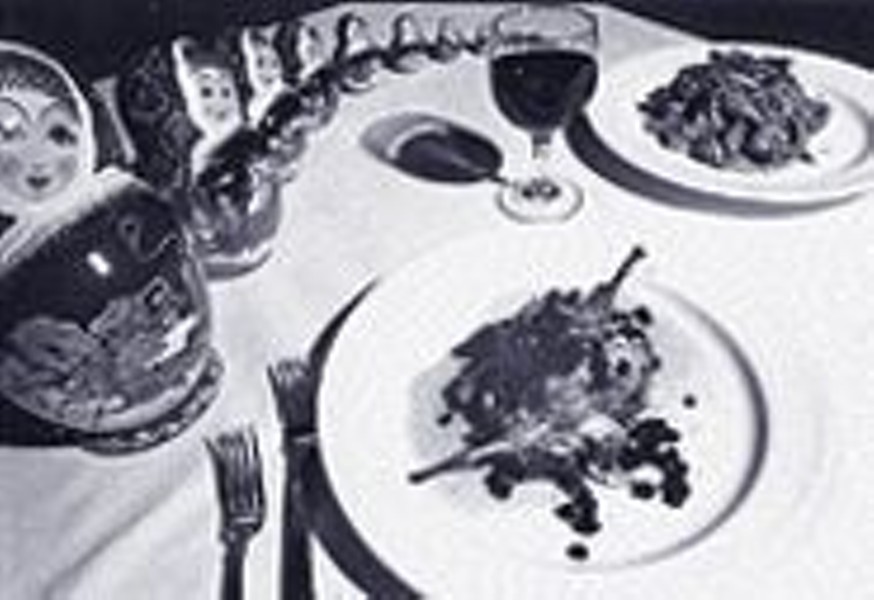 "The chef has burned your chicken Kiev," our server explained candidly, "but he's making you another one. Would you like a few shots of vodka while you wait?" Her offer seemed peculiar to us Americans, but swilling icy shots of vodka before the evening meal is a customary practice in Russia. Drinkers temper each stinging nip with a bite of marinated herring or perhaps a pickled mushroom or a stuffed egg.

Astoria European Cuisine, though not strictly a Russian restaurant, isn't limited to European fare, either. Though the usual caviar and borscht and beef Stroganoff are on the menu, the non-Russian items, such as Indian satay, Greek salad and New Zealand rack of lamb, form a global goulash made even more puzzling by incongruous specials like ostrich and mako shark. It's understandable that Astoria's owners, Sveta Podrabinok and Aleksandr Sardarov, broadened the menu beyond Russian cuisine to increase the restaurant's appeal among conservative diners, but isn't all of Eastern and Western Europe a wide enough swath to cut?

Most of us are familiar with only a few Russian foods, but the 15 former Soviet republics sweep a quarter of the way around the world. People of a hundred different ethnic identities populate the motherland, and influences on its cuisine are just as diverse. In particular, French preparation techniques and classic sauces were adopted during the 18th century, when czars and noblemen recruited the cleverest chefs from France or sent promising young serfs to train in Paris. The wanton feasts they concocted included freakish side dishes such as cows' eyes in sauce, salads such as one made with hundreds of tiny herring cheeks and ostentatious main courses such as baked young swan and roasted peacock, its resplendent feathers left intact. Today, fortunately, the Russian banquet table features more pedestrian choices.

Though Russia is a country of enchant-ing regional cuisines, bread is a revered staple common to all of them. Astoria's appetizer menu features khachapuri, a flat, delicate round of bread with a fine, soft crumb. It's split into two layers and stuffed with melted mozzarella and feta cheeses. In the Russian republic of Georgia, the name of the dish translates as "cheese pie," and it's eaten in crowded, smoky khachapuri parlors similar to our pizzerias.

According to a practice still followed in Russia, before the main meal, a table in or near the dining room is laden with decorative bowls and plates of appetizers called zakuski, or "small bites." This agreeable custom derives from the Scandinavian tradition of the smorgasbord. Nearly all the appetizers on chef Anthony Devoti's menu are Russian, so you can create your own zakuski table at Astoria.

Begin your meal with solenia, an assortment of pickled vegetables. To Americans, the word "pickles" is synonymous with pickled cucumbers. But Russians know how to use vinegar or salt to pickle almost any vegetable or mushroom and even some fruits, such as apples. This preservation method evolved as a way of coping with chronic food shortages and a brief growing season. Astoria's platter includes blunt, briny dilled cucumbers; a wedge of startlingly bright, spicy red cabbage; bulbous, mild yellow peppers stuffed with pale ribbons of cabbage; and garlicky, pulpy tomatoes. Astoria's Georgian-style stuffed eggplant, another cold zakuska, has a mellow herbal flavor and a fleshy, pliant texture similar to that of dried apples. Devoti prepares it by cutting a raw eggplant lengthwise into slices, spreading a paste of ground walnuts, cilantro and garlic onto the broad strips and then trundling them into tidy spools.

Be sure to sample one of the two kinds of dumplings on Astoria's appetizer menu: pelmeni, filled with ground beef, and vareneki, stuffed with puréed potato. Dumplings are a workaday Russian dish that's especially practical in Siberia, where copious batches are turned out and, well, frozen. Russians eat meat-filled dumplings in pelmeni parlors, called pelmennaya, and burly comrades boast about gorging on 100 or more dumplings at a sitting. At Astoria, Devoti rolls the dough thin, cuts it into circles and folds each disk over a jot of potato or ground meat, so that the finished dumplings are shaped like fat half-moons, naked save a slick of butter and a wisp of fresh dill.

Borscht (beet soup), like bread, is ubiquitous in Russia, yet no two recipes are alike. Astoria's borscht is as thin as bouillon and just as tame, albeit more colorful. A mound of shredded, cooked cabbage in the center of the bowl and a few cubes of boiled potato give the soup some body. It's napped with a dollop of sour cream, which should be mixed into the soup rather than allowed to melt unappetizingly on its surface. Perhaps the loveliest dish at Astoria is the potato-squash soup. It's actually two velvety puréed soups, the squash a bit sweeter and flirtier than the demure, unassertive potato. They're ladled into the bowl simultaneously, so that they share one vessel but do not mingle unless the diner swirls them with a spoon.

The flambéed chicken Kiev was presumably discarded, and its replacement arrived at the table unscathed. This complex Ukrainian dish is prepared by rolling flattened boneless chicken breasts into a tight cylinder, filling the core with butter and encasing the roulade in a jacket of bread crumbs before frying or baking it. When the diner cuts into the chicken, the hot butter spurts out alarmingly and pools on the plate. Devoti's version of the dish is an ungainly, oddly endearing specimen so perfectly oval and uniformly golden-brown that it resembles a dinosaur egg cradled in its nest of wilted spinach.

Less dramatic, but still pleasing, are Astoria's impeccably fresh fish entrées. Sturgeon, the fish from which caviar is harvested, has firm, white flesh and is netted in either fresh or saltwater, depending on the species. Astoria's sturgeon has a pronounced, concentrated flavor similar to that of the briny liquor inside an oyster shell. The meaty fish is cloaked in a satiny vodka cream sauce. The grouper -- a more subdued, pink-fleshed fish caught in tropical waters -- has a subtler, more nuanced taste that's a bit obscured by its heavy mantle of cream sauce, billed on the menu as a lighter-sounding "coconut broth." Each of the fish dishes is encircled by a ring of waxy fingerling potatoes, whose knobby, elongated shape resembles that of gingerroot.

Lamb kebabs were the least successful entrée we sampled. Called shashlik in the Caucasus republics of Armenia, Azerbaijan and Georgia, kebabs were created of necessity during the Middle Ages. With wood in short supply, less cooking time was required to skewer and grill smaller pieces of meat than to roast larger cuts. Astoria's lamb kebab was served without the promised green peppercorn sauce. In addition, the sinewy leg meat was cooked past the requested medium-rare, making the stringy flesh as tough as old leather boot straps. The chunks of lamb were inexplicably presented on a bed of ratatouille, a Provençal vegetable stew.

Astoria has only a limited dessert selection. Dainty French confections are supplied by La Bonne Bouchée, and Devoti makes a few simple desserts in-house. None of his creations is particularly Russian, but try them anyway. On our first visit, his pecan-caramel tart was a shameless delight. It has a shallow, crumbly crust strewn with chopped and halved pecans suspended in syrupy, sticky caramel. We ordered the tart again on our next visit but were disappointed that it was overbaked, with a chewy, browned crust. Devoti's chocolate cake is an epiphany. It's a single layer baked to the consistency of a moist pound cake and slathered with a loose, creamy chocolate ganache. It's sweet but not cloying, with none of the bitterness, graininess or dryness that mar lesser chocolate cakes.

Though the kitchen can be right on the mark, it's inconsistent and seems to have trouble delivering orders at a harmonious pace. Dishes that were supposed to arrive together did not, and the interval between finishing one course and beginning the next was about a half-hour. However, these protracted waits occurred only during our first visit, on a Sunday evening when just a couple of other tables were occupied. Our server made no apologies and offered no excuses for the delays, except when the chicken Kiev was burned. Nevertheless, Astoria's servers are friendly and seem knowledgeable about this complex cuisine.

You might expect Astoria's décor to reflect Russia's imperial history or perhaps its peasant traditions. Although the room has new ruby-red carpet and chairs upholstered to match, it has no artwork, fancifully wrought lighting fixtures, attractive table settings or other embellishment to amuse the eye. An absence of adornment is sometimes intentional, creating a spare, chic space. Astoria's dining room, however, seems lackluster and monochromatic, an impression that's magnified by a long, mirrored wall. The room's most appealing feature is its dance floor, decked out with a disco ball that sends Technicolor flashes of light whirling about the room. As the last straggling diners are finishing their meals, baritone Aleksey Zykov slides behind the keyboard. He's a hulking, heavily bearded alpha male from Moscow who looks as though he has more than a passing familiarity with those pelmeni parlors back home. He soon begins pumping out Eric Clapton, Billy Joel and Frank Sinatra ditties in both Russian and English. His enthusiasm and resonant voice captivate the audience, and diners clap in time to the beat as Zykov lustily belts out the refrain of "Those Were the Days." No doubt he's thinking about those delicious dumplings.