MABEL SUEN The burger is topped American cheese, pickles and dijonnaise and served on a brioche bun.

If you plan on going to Rockwell Beer Company for a Brasswell burger on a Friday or Saturday night, be prepared. It's not enough to say that securing a seat is difficult. Finding a place to park yourself in the perpetually packed tasting room is a feat of strength so intense it should be a Ninja Warrior challenge. Fellow guests are not kindred beer and burger enthusiasts. They are competitors to be edged out with speed and agility yet enough self-restraint to refrain from asking a table halfway finished with their beers if they intend to order anything else.

Instead of winning the challenge, you may well find yourself relegated to a small piece of a communal high top, crammed between an office happy hour and a family of six, trying to balance your coat, pint of beer, phone, keys and a cafeteria tray filled with fries and a sandwich. If this is your first time eating a Brasswell burger, you may wonder if having to endure the gauntlet is worth it.

One bite is all it takes to answer that question unequivocally. Without a doubt, yes.

Nestled onto the most buttery, pillow-soft brioche bun known to man, the Brasswell burger is pure beefy bliss. A juicy, quarter-pound smashed-style patty drips with enough glistening fat to qualify as a condiment. Molten American cheese melds with dijonnaise and the meat's juices, forming a rich, cheesy goo that soaks into every crevice of the burger, while white onions and thinly sliced pickles add a spark of acid to balance out the decadence. You could eat this sandwiched between fellow patrons, sitting on the floor or hanging upside down from the rafters, and you wouldn't even complain. It's that wonderful.

But while you might assume the Brasswell burger must be the reason for Rockwell's crowds, it's only part of the story. After announcing in April 2016 that he was going to open his debut brewery, Rockwell's owner and brewer Andy Hille became one of the city's most buzzed-about entrepreneurs. Hille had made a name for himself in the local craft beer community as a brewer at Perennial Artisan Ales, and the excitement for his project only grew as details emerged about his vision for a modern tasting room on an industrial stretch of Vandeventer that, once completed, would serve as a connector between the popular Grove and Botanical Heights neighborhoods.

Hille may have been destined for success, but Rockwell hit some stumbling points along the way, adding to the anticipatory fervor even while delaying its opening by two years. Hille made good use of that time, however, making sure he got the right brewery team, branding, and design for the space — a cool, industrial building made in part from old shipping containers.

He also made an important decision about food, tapping acclaimed chef Gerard Craft and his Niche Food Group to run Rockwell's culinary operations. The James Beard award-winning chef, whose concepts include Sardella, Cinder House, Pastaria, Brasserie by Niche and Taste, relished the idea of doing simple, well-executed bar food in a setting that would expand his brand's reach.

Craft, together with his longtime cook Joe Landis, tossed around ideas for Rockwell's food operations before landing on an obvious choice. Rather than reinvent the wheel, they decided to use Brasserie's popular happy hour menu and former lunchtime brats-and-burgers concept as the menu's basis, sprinkling in a few new items and rotating specials as well. Named Brasswell (they style it brassWELL, but a newspaper must have some limits), the operation would be a low-key food counter, serving the sort of simple, fast-food-style dishes that, while made expertly from quality ingredients, would pair well with a low-key evening of beer.

Rockwell's beers are well suited to such an evening, balancing the tastes of both casual beer drinkers and hardcore enthusiasts. The "Stand By" pilsner, in particular, hits that sweet spot between approachability and interest with its easy-drinking yet bright and snappy finish. Its hops are gentle, as opposed to the citrus-bomb slap that comes courtesy of the "New Feeling" India Pale Ale. An IPA drinker's dream, it's tailor-made to cleanse the palate after a juicy burger.

Such pairings finally got their chance to play out when the brewery's tasting room opened in late November. The place enjoyed immediate success, becoming a destination as much for the food as for the beer.

The two concepts are interwoven seamlessly, with guests ordering food from the same bartenders who pour their beer. You get your pint, grab a buzzer and head off into the packed dining room, hoping to find a seat before your food is up.

The real estate issue stems from the sheer popularity of the place, not a design flaw. Rockwell is amply sized, consisting of a large, open room in a former machine shop. An industrial aesthetic, with concrete and metal design details, reflects the building's former incarnation. It hits you the moment you pull up to the building and spot four old metal shipping containers — two jetting out of the building; two mounted so that they look like they are suspended in the air.

Inside, you find a tasting bar on one side of the room and a mix of wooden booths and high-top communal tables scattered throughout the remainder of the space. Hille and company even set up extra seating in the large room that holds the fermentation tanks. On weekends, they try to accommodate additional guests by bringing in the tall, round cocktail tables you'd find at a wedding reception. 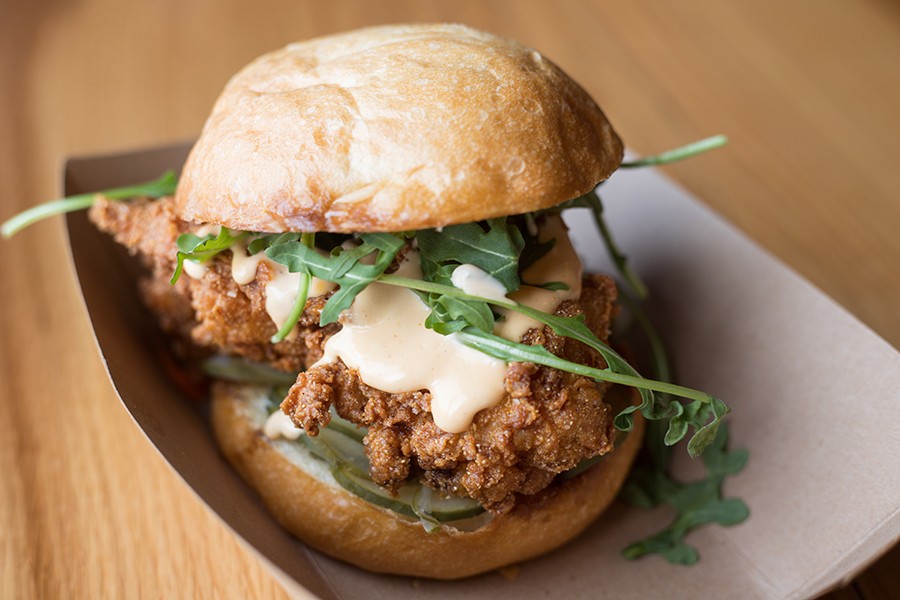 It's still not enough to meet the demand, perhaps because while the burger may be the restaurant's shining beacon, it's not the only show in town. Far from it. The chicken sandwich is a show-stopper in its own right, a deep-fried composite of brined and breaded dark or white meat. I opted for the latter and was impressed by the succulent chicken, its seasoned breading cooked up to a crisp, dark-golden hue. If the peppery arugula on top gives it a small kick, the fiery aioli, made from Crystal hot sauce, lands a harder blow, wrapping the tangy heat of the Louisiana condiment in creamy mayonnaise. It's the flavor of a Buffalo chicken sandwich but decidedly more haute.

Brasswell's beer brat is delightfully porky and snappy. Warm spices evocative of the cardamom and caraway of Indian cuisine give the sausage a haunting perfume, while seeds from the liberally applied whole-grain mustard pop with each bite like little fireworks of tartness going off in your mouth.

Vegetarians are not out of luck at Brasswell. A veggie burger, made from brown rice, quinoa, corn, black beans and red peppers, had a subtle Southwestern spice to it and a pleasant texture that is soft toward the interior, but crisps up around the edges. Even a simple grilled cheese (listed on the kids' menu but available to all ages) is a delight, its thick slices of Texas toast slathered with enough butter to form a rich crust.

Landis is given the freedom to create specials, and for Fridays in Lent, he is doing an off-menu sandwich of flaky, beer-battered cod, served on that outstanding brioche bun and garnished with arugula, pickles and a rich sauce gribiche, a French condiment akin to tartar sauce with eggs. And to think Lent is supposed to be a time of sacrifice. 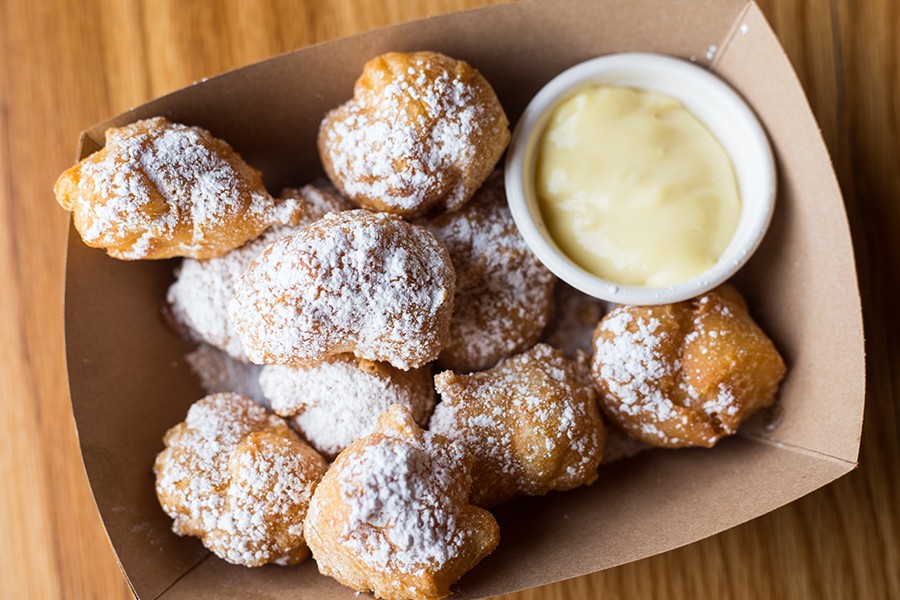 Of course, Brasswell would not be complete without the Brasserie fries: liberally salted, thin, crispy frites that are one of the Craft restaurant group's most famous offerings. Sweet-potato chips are a worthy alternative thanks to an unexpected chile heat that sneaks up on you after eating a handful.

As tempting as it may be to devour the entire basket of fries or chips, you'll want to save room for another Brasserie carryover: the beignets. At Brasswell, they are a smaller version of the cloud-like fritters, so you can pop them in your mouth one after another, allowing them to dissolve on your tongue like sugary poufs. Then again, you can also wash them down with a dish of velvety chocolate or vanilla soft-serve ice cream that evokes the summer vacations of your youth.

That feeling of nostalgia — a burger and fries, beer and brats, chocolate and vanilla soft-serve — permeates so much of Brasswell that it's easy to see why it's been such a runaway hit. Nevermind that you'll likely be sharing a table with a total stranger. That's the beauty of good food: It brings people together.