Every two weeks or so, Wil Pelly gets a phone call that is so surreal he has to pinch himself to make sure he isn't dreaming. On the other side of the line is none other than rock and roll legend ZZ Top singer and guitarist Billy Gibbons asking, in his legendary gruff voice, for his regular order: a few cases of Rock Star Dust, please.

For Pelly and his business partner, Matt Arana, the fact that they are at a place in their lives where bona fide rock royalty regularly rings up their cellphones for their restaurant's signature seasoning blend is still incomprehensible. They never could've imagined they'd find such success the evening the idea for Rock Star Taco Shack came to them. It was a particularly debauched night following a show they'd just played, and the longtime bandmates got to talking about a vacant food shack for lease in their St. Charles neighborhood of New Town. Several shots of tequila and whiskey later, they were convinced they should turn it into a taco shack and even came up with silly, music-themed names for their dishes. At the time, it seemed like a great idea.

Unlike most booze-fueled ideas, this one continued to seem great even after they came to their senses. On numerous occasions, they'd passed the tiny, vacant building when driving into New Town and mused that it would be a great spot for a quick-service restaurant. Determined to see the idea through, they contacted the leasing agent, got a reasonable quote on rent and set out to make their vision for Rock Star Taco Shack a reality. 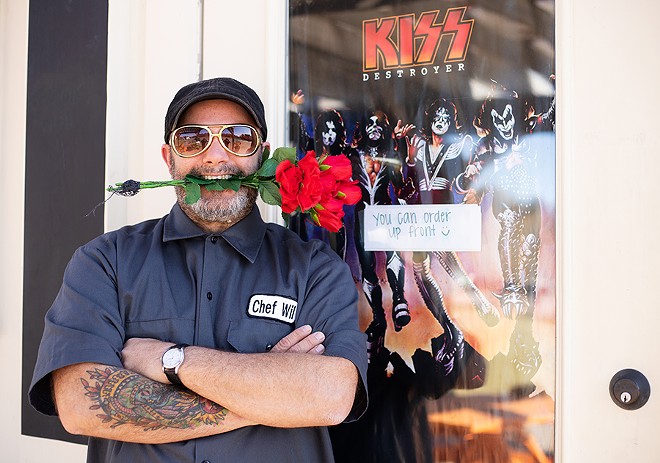 For Pelly, a restaurant industry veteran who has worked in several prominent St. Louis kitchens (the Libertine, Nudo House, Boundary), the move to open a place of his own was a natural progression. That this would happen in New Town St. Charles might not seem immediately evident, but for Pelly and Arana, it made perfect sense. As the friends got to know the planned community's neighbors (Pelly has since moved out of the area; Arana recently moved in), they sensed a craving for quick yet thoughtful food that would appeal to everyone from families in search of an easy weeknight meal to couples looking for a date-night snack as they walked around the area's main drag.

They also hoped that, despite the fact that New Town is a somewhat isolated area, it had enough local traffic to sustain the business. They received their answer to that question this past Cinco de Mayo when, during a Rock Star Taco Shack pop-up at the local wine bar, they served 2,000 tacos in two hours.

That they managed to pull off such high volume during the pop-up was nothing short of miraculous. The fact that they are able to run a successful business out of a 100-square-foot concession stand in an out-of-the-way St. Charles neighborhood is equally impressive. Rock Star Taco Shack is little more than a kitchen with an order window, but Arana and Pelly have made the most of the tiny digs. Picnic tables provide seating behind the shack, but during colder weather, the restaurant is mostly a grab-and-go operation and even offers curbside pickup and delivery throughout New Town.

If you are a New Town resident, this means you can pull over on your way home from work, hop out of the car and have dinner ready in a matter of minutes. If you are a non-New Towner, your options are limited and may involve scarfing down your meal and a canned margarita while sitting on the floor of your minivan (true story). It's not exactly the most persuasive argument for making a trip out to Rock Star Taco Shack, but Arana and Pelly do their best to make the case. 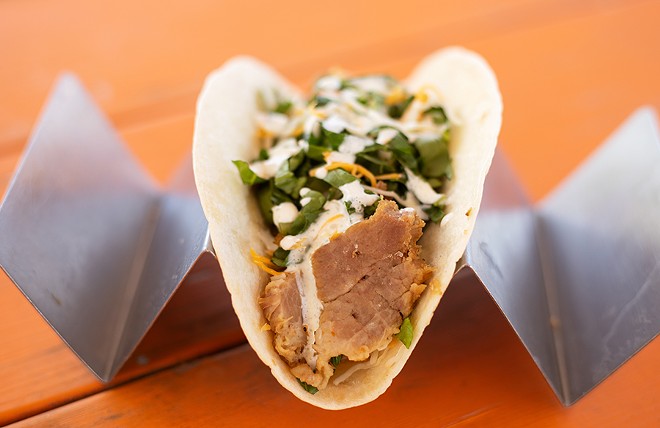 Their most compelling argument for stopping by the shack, whether from near or far, is their Cuban-style citrus and garlic pork, the Tito Puerco. Pelly's mother hails from Santiago, Cuba, and he counts his childhood experience of making tamales with her and her fellow expat friends as one of his biggest culinary influences. His background in Cuban cooking shines brightly in the form of this succulent meat, which is like a juicier, fattier pulled pork. Tender hunks of meat are stuffed into a warm flour tortilla with lettuce, cheese and Fancy Sauce, made with ranch and jalapeño-seasoned sour cream. These accoutrements don't take away from the pork, but they're unnecessary considering how wonderful the meat is on its own. Next time, I'll ask to see Tito naked.

Often a throwaway offering, the chicken taco at Rock Star Taco Shack is one of its best. Called Thunder Cluck, the taco features large pieces of pulled chicken that have been stewed with chipotle peppers and Pelly's secret ingredient, Sweet Love. The result is a sweet and spicy jus that coats the meat like a light barbecue sauce. It's good as a taco; it's magnificent tucked into a gooey Quesa-Dio, where the spicy meat melds into the molten cheese. Dipped into a side of Fancy Sauce, it's a decadent treat.

Rock Star's vegetarian offering, Livin on the Veg, is surprisingly thoughtful. Filled with zucchini, squash and broccoli — all flawlessly cooked just a touch beyond al dente — the taco is finished with a dash of Rock Star Dust, the restaurant's signature seasoning blend. Made from paprika, chiles, cumin, sugar and garlic, the mildly hot and subtly sweet seasoning adds depth to what could have been a boring vegetable medley. 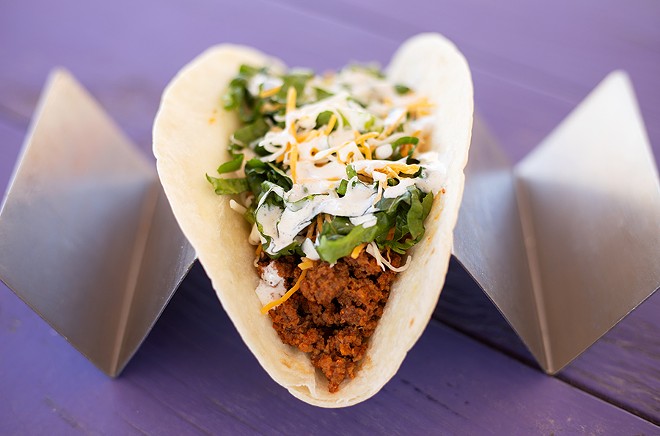 That Rock Star Dust features prominently in the Number of the Beef, a taco filled with meat that tastes shockingly similar to Taco Bell's ground beef. Here, shredded lettuce, cheese and Fancy Sauce are perfect complements for this gringo taco.

As if it could get more American-style than the Number of the Beef, one of Rock Star's recent specials plays up the restaurant's unapologetically non-traditional ethos. Called We're Coming to America, the off-the-menu offering is basically a cheeseburger in taco form: salt-and-pepper-seasoned ground beef, lettuce, thick-cut red onions and a slice of American cheese. If you can get past the fact that, somewhere, someone's abuela is shuddering that this is called a taco, it's actually pretty darned tasty.

Limited by its tiny real estate, Rock Star Taco Shack offers only a couple of appetizers, like the Ring of Fire salsa, a refreshing, almost puréed tomato salsa that is mild but smoky, which gives it interest. The Platinum Queso is another fine chip dip; the velvety concoction is amped with what tastes like Rock Star Dust seasoning, giving it a softly spiced, deeply savory taste.

Rock Star Taco Shack is a solid effort by Arana and Pelly, but it is clearly designed to be sustained by the residents of New Town. This is not a taco destination — and that's fine. It's not intended to be anything more than a low-key, approachable culinary amenity to the neighborhood. And a rock-star catering outfit. Since opening in June, Pelly and Arana have been able to book high-profile catering gigs thanks to their music industry connections and proximity to the Hollywood Casino Amphitheater. This is how they came to know ZZ Top's Gibbons and Alice Cooper, among other music greats. In fact, their relationship with the former may be their meal ticket: Gibbons is so enamored with the Rock Star Dust that he is talking with Arana and Pelly about helping them launch it nationally as a complement to his Whisker Bomb hot sauce.

Not bad for a couple of guys slinging tacos in New Town.