Robert Zemeckis Creates Wonder and Hope in The Walk

Courtesy of Sony Pictures/CTMG Inc The walk of a lifetime for Joseph Gordon-Levitt.

The story of Philippe Petit's daring high-wire walk between the twin towers of the World Trade Center in 1974 is not a new one to New Yorkers or to film lovers: It was the subject of 2008's Oscar-winning best documentary feature, Man on Wire (see it if you haven't already; it's currently on Netflix and Amazon Prime). But we haven't seen that story like this before.

Robert Zemeckis is a cinematic fantasist of the highest order, using magical FX to tell wondrous tales that could not exist anywhere but in the realm of movies: the Back to the Future trilogy, Who Framed Roger Rabbit. (He has also, alas, perpetrated some of the most terrifyingly off-putting examples of dead-eyed CGI, including Beowulf and The Polar Express, but we'll try to forget about those.) In The Walk, he puts CGI and IMAX and 3-D to perhaps their most perfect uses ever, to re-create a real place that no longer exists and a real event that no one else on the planet ever experienced, nor ever could now. There isn't any film or video footage of Petit's actual walk, only still photos taken by one of Petit's "accomplices" during his walk. 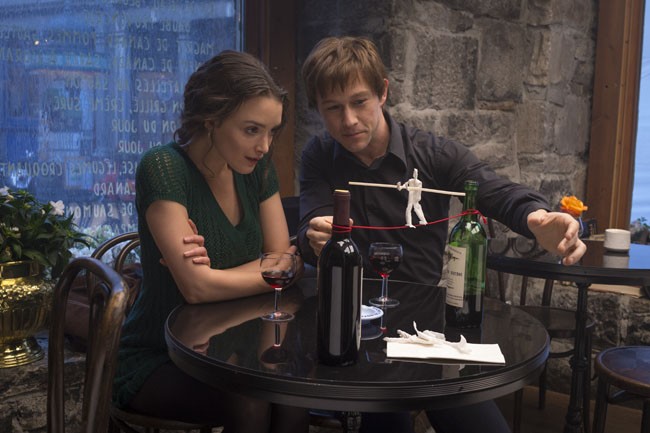 But now The Walk puts us up on that wire with Petit. IMAX 3-D is not a gimmick or a cheap boost to the ticket price here but an absolutely essential element to the tale...and not only once Petit is up on that really high wire, which comes late in the film. Everything about the art and daring of this Parisian street performer, who taught himself how to walk a wire, comes with a wonderful vertiginous thrill, even when the wires he's walking are just feet off the ground.

The Walk soars, too, thanks to Joseph Gordon-Levitt as Petit; it's hard to imagine a more delightful choice for the role. The actor has never been this captivating, this downright enchanting before. He lends the film an air of the fairy tale that is just right in helping to balance out the inevitable whiff of sadness that hangs over it all. Director and co-screenwriter (with Christopher Browne) Zemeckis — working from Petit's book To Reach the Clouds — makes on overt, and mostly successful, attempt to mythologize the towers, ultimately casting this as the beginning of the story of the buildings, when they came to life for New Yorkers as Petit's stunt perhaps "gave them a soul," and leaving their ending unspoken, because those future events are inevitably all too heavy in our awareness anyway.

This is a happy movie, though! Petit's scheme is to infiltrate the towers — still under construction but nearing completion in the summer of 1974 — with the help of his girlfriend, Annie (Charlotte Le Bon), his photographer pal Jean-Louis (Clément Sibony), an architect who works in the towers (a scene-stealing Steve Valentine), and a New Yorker and secret Frenchman (James Badge Dale). As the plan evolves, The Walk becomes something of a reverse-heist story built around the need to sneak into a place with all sorts of unlikely equipment and string a massive tightrope without anyone noticing or trying to stop them.

It's electrifying, crazy and funny, the last being something I was not expecting at all. And it's pretty inspiring, too. Petit deems his plan an impossible dream of illegal anarchist art, "the artistic coup of the century," and for all the danger — or maybe perhaps because of the danger — that's exactly what it ends up feeling like. The Walk is an extraordinary telling of an extraordinary story that makes impossible dreams of impossible art seem inevitable and necessary.