St. Louis police Sergeant Brian Rossomanno is known as an expert tactician, but tonight he has been outflanked. The cop nicknamed "Riot King" is surrounded — kettled, you might say — by a group of protesters bearing down on his SUV.

"Who do you protect?" the protesters shout in unison. "Who do you serve?"

It is just after dark, about 8 p.m. on September 28. Rossomanno, a linebacker-sized SWAT leader and former Marine, is parked about twenty yards short of the Tucker Boulevard intersection where, eleven days ago, he helped corral and arrest 123 people, including protesters, journalists and neighborhood residents. Officers were recorded on video filmed by livestreamer Rebelutionary Z as they manhandled people who had already surrendered, pepper sprayed people on their knees.

"It's going to be like this every night," witnesses say Rossomanno warned that night.

State Representative Bruce Franks (D-St. Louis) has just watched video of the arrests, and he is upset.

"When they did what they did, they called it 'kettling,'" Franks says over a bullhorn. "They said they 'kettled' them."

The kinetic 33-year-old lawmaker has been on the front lines of the protests every day since September 15, when a white ex-St. Louis cop named Jason Stockley was found not guilty of murdering Anthony Lamar Smith, a black 24-year-old whom he suspected of making a parking-lot drug deal.

With images of the kettle fresh in his head, Franks thinks it is time for Rossomanno to understand what it is like to be surrounded, penned in with no escape route. By the time he and several dozen marchers swarm to the front and sides of the sergeant's white-and-blue Chevrolet Tahoe, a second, smaller band of protesters has already fanned across the street behind the vehicle, blocking it in. For the next twelve minutes or so, the crowd is in the officer's face, shouting at him from all sides. A woman holds a sign in front of his windshield that says "My Son Matters" above a "Black Lives Matter" hashtag. 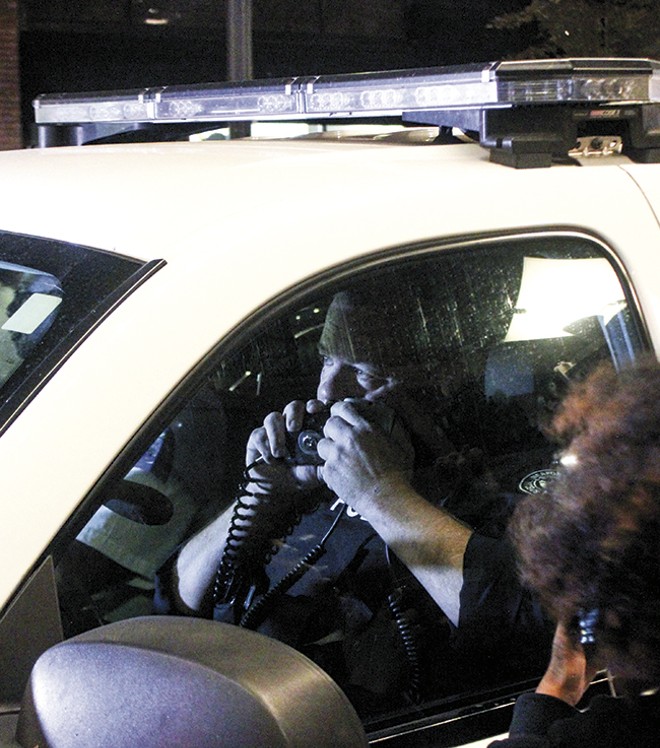 Rossomanno has a long face and bags under his eyes that give him the melancholy expression of a cartoon hound dog. As he sits in the SUV, he alternates between speaking into his radio and holding up his phone to film the protesters.

Riot King holds the loudspeaker mic in front of his mouth and begins what has become a familiar refrain: "This is an unlawful assembly. This is an order to disperse." He warns that those who linger are subject to arrest. He threatens to deploy "chemical munitions."

This is a big part of how Rossomanno earned his nickname. The frequent threats. The reminders that arrests, pepper spray or worse are subject to his whims. The protesters do not call him Riot King because he responds to riots; it is because, they say, he brings the riot.

He seems to have embraced the image. On the Facebook page for his side business, a company that provides security details and training, the caption below a picture of him included the hashtags #riotking and #protestseason. The post was only removed after livestreamer Heather De Mian, who had taken the photo, complained on Twitter about him pilfering her work.

And yet what galls many protesters about Rossomanno isn't just that he's mercurial; it's that he simply isn't effective. Not only is he prone to inflame tempers on the street, they say, but his aggression actually fuels further action.

Take tonight, for example. Other supervisors assigned to monitor the near-daily marches have mostly avoided these situations simply by putting their vehicles in reverse and driving up the street a bit. As long as the demonstrations are non-violent, as tonight's has been, the idea is to maintain enough distance to avoid needless confrontations. Rossomanno, however, remained defiantly in the middle of the street as the crowd approached. Now it is too late to drive away. He sits cocooned behind the wheel, working his radio and awaiting backup. 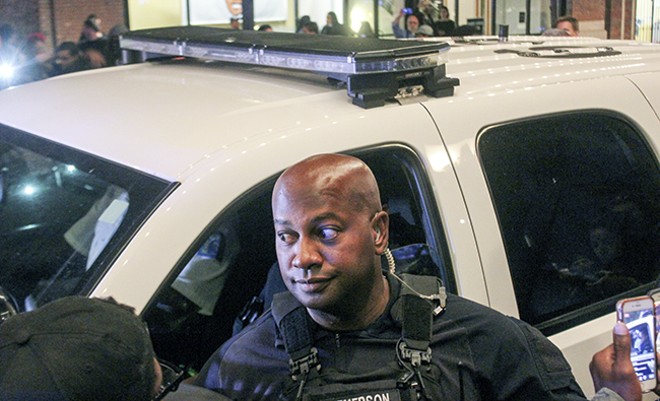 Sgt. Randy Jemerson is among the first to arrive. A stoic professional, he joined the department in November 1997 as part of the same class as Rossomanno and is also a SWAT leader and tactics instructor. But where protesters have come to see his counterpart as temperamental and vindictive, Jemerson is respected as a calming influence.

He starts by working his way to the driver's side window of the Tahoe, making himself a human barrier between the crowd and Rossomanno while he quietly explains to protesters that they have put him in a bad position by surrounding a police vehicle.

But as Jemerson works to de-escalate, there is a new antagonism from the east. A line of riot police with shields, helmets and batons starts to march across Tucker toward the demonstrators. The helmeted troops step in unison, chanting "move back, move back," until they reach the mouth of Washington and stop. The crowd leaves the Tahoe and goes to meet them, freeing the cop from the kettle.

But Rossomanno is not the type to make a graceful retreat. Now that he's no longer boxed in, he opens his car door and calls out to Franks.

"Mr. Franks, you're wanted for assault on a law enforcement officer," he says.

Franks is in disbelief. Assault on a law enforcement officer? When? Where?

The accusation touches off another flurry of shouting. Franks angrily denies assaulting anyone. He yells at the highest-ranking officer on the scene, Major John Hayden, to get control of his sergeant. After more shouting, the focus shifts back to the front line, where protest organizers are ushering demonstrators onto the sidewalk even as they demand the riot police retreat across the intersection.

A force of at least two dozen St. Louis County police officers has arrived, dressed in helmets and heavy tactical gear. A few carry the bright orange "less lethal" shotguns capable of firing bean bag rounds. Some protesters worry that police are setting the stage for yet another kettle.

Rossomanno, now with a small army surrounding him, chats with an elderly woman at the edge of the street. He has apparently abandoned the assault claim against Franks and is telling the woman just how lenient he has been.

"Right now, we have every legal right to start snatching people," he says.

The woman is hoping for peace. No protester has thrown anything or broken any windows. Really, all they did was circle his Tahoe and yell at him.

"If you surround a police car and starting banging on it, that's going to elicit a response," Rossomanno says.

Jemerson has continued to work back and forth between the crowds and the police line. Eventually, with protesters on the sidewalk, the riot police retreat back across the intersection, draining the tension as they go. The crowd goes the other way. They chant "united we stand, united we fall," and march past the county cops still holding those orange shotguns.