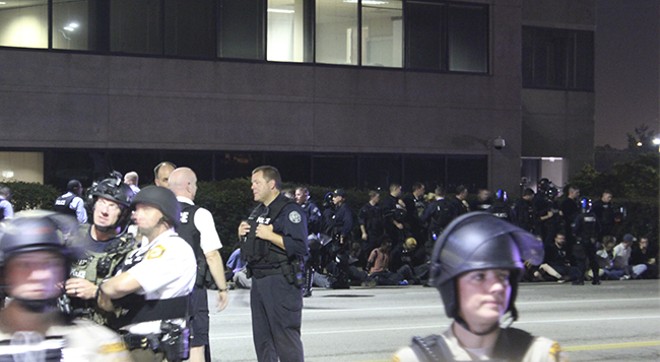 Protesters who were not on the highway or who had peeled off before the arrests have begun to gather at Jefferson and Market, but they are kept back by police. Rossomanno strolls along next to the newcomers. One shouts that police never gave anyone a dispersal order, and the sergeant says that's true: "We're under no obligation to give a dispersal order."

A woman asks, "Why did you arrest them then?"

Rossomanno replies, "If you've got a burglar trapped in a house, you don't give them a dispersal order."

Vans roll in, and officers begin loading up their prisoners in bunches. There are 143 in total. The group includes pastors and multiple journalists. It is a diverse crowd. Young black men from the city are being locked up along with middle-aged white women from University City, Clayton and Webster Groves. Several are being arrested for the second time since the protests began. All are charged with trespassing.

They call out their names and birth dates to people beyond the police line who will work on finding lawyers and raising bail if need be. A few ask friends to tell their spouses what has happened or inform bosses they will be late for work in the morning. The prisoners seem generally upbeat, still riding high on the success of their caper.

Police are similarly in a good mood. A bike cop gives a photographer a thumbs up, and Rossomanno grins and shakes hands with a county police officer dressed like a paratrooper.

As the last of the prisoners wait to be transported, a crowd begins to form downtown on the steps of the jail. People bring tents, and someone orders pizza for all. A contingent of lawyers off to the side work their cell phones and wait to be allowed in. A jail supervisor in a white shirt steps outside and taps his hand against his leg to the rhythm of the chants: "If we don't get it, shut it down!"

A few die-hards sleep there all night, and reinforcements arrive in the morning with coffee. Franks emerges from lockup a little before 2 p.m., wearing a Superman T-shirt.

"One of the arresting officers made a comment, said, 'I bet this will teach y'all about protesting,'" he says. "I said, 'If that's what you gathered out of this, you need to go back to the drawing board.'"

in the ongoing protests as of Monday.

Although cops have reported violence, including an officer whose jaw was dislocated by a thrown piece of brick, the vast majority have been for people walking or standing in places police told them to leave. This does not count the 22 people tackled and hauled out of the St. Louis Galleria in Richmond Heights. It does include the Rev. Darryl Gray, twice. He was knocked to the ground on September 29 outside Busch Stadium and charged with interfering. He says police turned on him when he stepped between them and a female pastor whom they were shoving out of the roadway. This set off a chain reaction. Another man was hit with a taser and arrested when he started to come to Gray's side. Democratic Committeeman Rasheen Aldridge says he was pepper sprayed in the face when he asked what was going on.

Livestreamer Heather De Mian, who has covered protests for years, was pepper sprayed from the side as she filmed the chaos from her wheelchair.

"They seem to be threatened by women in wheelchairs with cameras," De Mian deadpans later.

The incidents have continued to pile up, angering new groups of people each time. Critics say the clashes are examples of a needlessly aggressive, militarized police force.

Those who see Rossomanno as part of that culture point to his side business training law enforcement, security officers and even the military for nightmare scenarios such as active shooters. He is the co-founder of a company called 0311 Tactical Solutions and lists corporate clients such as A-B InBev and the St. Louis Cardinals. "0311" is Marine code for a rifleman, and the company website is filled with pictures of warriors in training: helmeted tactical teams with guns drawn, a security detail with black boxes hiding their faces.

"Too much is stake in this world of ever increasing violent incidents," warns 0311. "One casualty is too many."

The site previously included the St. Louis Metropolitan Police Department as a client, although the company noted it didn't have a contract. Those references were removed after Post-Dispatch reporter Jeremy Kohler began questioning possible conflicts of interest. Schron Jackson, the city police spokeswoman, tells the Riverfront Times that 0311 Tactical has no affiliation with the department, although multiple officers work second jobs with the company.

Reached by email, Rossomanno says he will agree to an interview if his bosses at the department clear it. But the police spokeswoman says he will not be available.

A few of the questions sent to his 0311 Tactical email were later answered from a general company email and attributed to 0311 Tactical's management.

The company tries to instill a warrior or combat mindset in its instruction, but only for specific purposes, such as active shooter training, the email says.

"In that very narrow and specific discipline, we do advocate a particular mindset for those going towards the gunfire during a mass shooting incident," it says. "It is a mindset that is not appropriate for nor is it applicable to all police functions, such as patrol or conflict resolution, and we never claimed it to be."