Sergeant Brian Rossomanno is not a rogue cop. That would imply he is out of step with the direction of the department's leadership, and that is surely not the case. In fact, the 45-year-old is not only the most prominent face for police on the front lines of the demonstrations, he is the instructor who teaches other St. Louis officers tactics for crowd control. It is his specialty, and he is a student of the genre.

When the Republican National Convention came to Cleveland last year, the police department sent Rossomanno and a team of officers to pow wow with other riot cops who had come from around the country to learn and share tips. It was from that trip that St. Louis police got the idea to use bike cops at protests. Now, the speedy, wheeled fleet is a regular part of the city's response.

"Sgt. Rossomanno is the department's most qualified team coordinator and plays an integral role in civil disobedience training," police spokeswoman Schron Jackson says in an email.

His influence is such that even when he is not in the street, you can see his fingerprints on the work of his pupils — lines of Riot Princes rattling cans of pepper spray.

Rossomanno's role has only grown under Lt. Colonel Lawrence O'Toole. The interim chief is the former commander of the department's mobile reserve and SWAT units and is known as an old-school cop who came of age in a less-diplomatic era of American policing. The department's overall response to protests is his decision. Does he use more bike cops? Send patrolmen out in regular uniforms? Or is this a situation for helmets and batons?

So far, O'Toole has leaned unapologetically on the riot police, with Rossomanno as the tip of the spear. That's an unsettling thought to protesters who first encountered the sergeant three years ago during the Ferguson protests.

"Often times, you can figure out what's going to happen that night by how angry he is, which is pretty frightening," says Keith Rose, a seasoned protester.

Rose and others originally started calling Rossomanno "Riot King" because tensions escalated whenever he arrived on the scene. Also, he wore no identification, and they didn't know his name back then. Rose says he has since tried to cultivate a working relationship of sorts with Rossomanno, solely as a way to sense his mood and gauge the danger level that night. Some days, they have cordial conversations. Others, Rose advises people to watch out.

"He's the one you look at if you want to know what's going to happen next," Rose says.

Cheyenne Green, one of the protests' core organizers, says she can tell the difference between a night when Sgt. Jemerson is in charge versus Rossomanno.

O'Toole has rotated higher-ranking commanders in and out of the protests, but Rossomano has been a regular presence since the first day. He was involved on the night of the mass arrests (the department denies using a kettle tactic) at Washington and Tucker, when officers swept up everyone on the street, including St. Louis Post-Dispatch reporter Mike Faulk.

Hours later, O'Toole bragged in a news conference that police had "owned the night" and praised officers for doing "outstanding work."

The actions of police that night are now the subject of two lawsuits, including a class action suit filed by the ACLU alleging that officers beat people, erased videos from their phones and ripped off their goggles so they could be pepper sprayed directly in the eyes. A documentary filmmaker from Kansas City claims he was knocked unconscious and officers tried to smash his camera. At the end of the night, a chorus of police officers chanted "Whose streets? Our streets," witnesses said.

Mayor Lyda Krewson, who stood at O'Toole's side during the resulting news conference, has since said she disapproves of the "police owned the night" comment. She and the interim chief eventually issued a joint statement promising an investigation into the allegations. 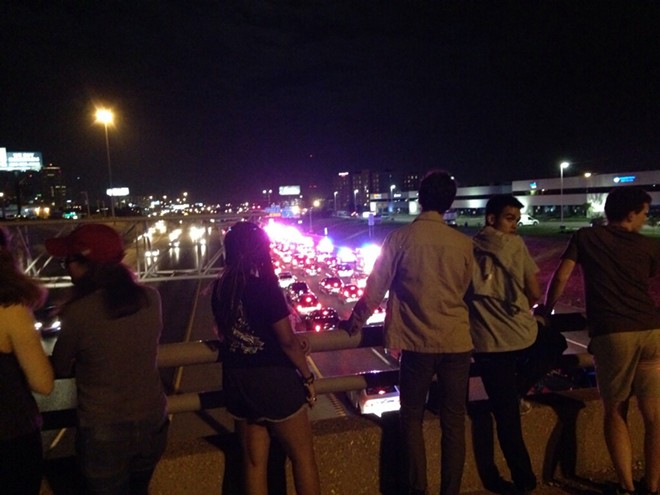 The meeting at Schnucks was a decoy.

Organizers had announced a 6 p.m. meet-up on October 3 for the night's demonstration, but this turned out to be only the jumping-off point.

After a brief huddle in the parking lot of the grocery chain's Lindell Boulevard store, the protesters who were willing to risk arrest loaded up three, four, five to a car and started driving west.

Now, more than 100 people are on foot in the middle of Interstate 64/40, marching east. They walk in the glow of headlights under Compton Avenue. City police officers and crowds of curious onlookers have gathered along the overpass to watch the procession from above and snap photos. A line of more than a dozen St. Louis County police cars trails the group, but there is little to do but roll along and wait.

For weeks, keeping protesters off the highways has been a top priority for police. Officers and state troopers have repeatedly massed at on-ramps any time they have spotted marchers headed that way. But tonight, they have been out-maneuvered. Carloads of protesters drove onto I-64 and then stopped to unload passengers directly onto the asphalt. The transport vehicles then formed a rolling barrier to protect the marchers from regular traffic.

Soon, the backed-up cars stretch out of sight. The protesters lock arms and march forward as photographers hurry into position to capture the scene.

When the group finally exits at Jefferson Avenue, they turn north and slide over to the sidewalk. Police are waiting. Riot cops form a line across Jefferson while bike officers pedal around Clark Avenue to sweep in from behind. Finally off the highway, the county cops cut off traffic on Jefferson and surge toward Market Street to join the operation. Protesters are surrounded and ordered to "sit down!" on the sidewalk and curb. Officers move in with plastic zip ties to bind their wrists. Franks posts a message on Twitter: "We getting locked up!"