ERIC WOOLSEY Roland Wood portrays the title character, with So Young Park as his daughter, Gilda.

Music by Giuseppe Verdi. Libretto by Francesco Maria Piave, English translation by James Fenton. Directed by Bruno Ravella. Presented through June 30 by Opera Theatre St. Louis at the Loretto-Hilton Center (130 Edgar Road, Webster Groves; 314-961-0644). Tickets $25 to $129.
I’m generalizing here, but the biggest asshole in many social groups isn’t the alpha male. The guy with the putdown that wounds you to your core is not the good-looking guy, the one the girls fall for. Instead, he’s the one hanging on the edges, the one who barely belongs. As a result, he’s quick to insult anyone who’s outside the circle — proving his bona fides by exposing your lack of them.

For Rigoletto, the title character of the gripping production that opened Saturday at Opera Theatre St. Louis, being the asshole isn’t just his personality; it’s his job. Working as a jester for the Duke, he uses his ventriloquist’s dummy to horrible, mean-spirited affect. Dressed in shambling clothes, his face marred by a port wine stain, Rigoletto would ordinarily be on the outside looking in. But by being the hired jerk, he lets the Duke and his friends have their fun even as they get to keep the pretense of being nice guys. It’s ugly work.

Soon after the opera begins, it all goes awry. When Rigoletto laughs at a distraught father searching for the daughter the Duke has seduced, the man curses him — a curse that hangs over all the action that follows. Rigoletto’s daughter Gilda is kidnapped by his own companions as he unwittingly stands by, and then she is debauched by his employer.

The music scoring this tragedy (based on a play by Victor Hugo, of Les Miserables fame) is by Giuseppe Verdi, and not coincidentally, it’s gorgeous. There’s not a false note in the score, which is melodic without being simple, accessible without being overly familiar. It’s unrelentingly beautiful from the ominous beginning all the way to the terrible end.

It helps that director Bruno Ravella’s cast is anchored by two powerhouse singers. As Rigoletto’s daughter Gilda, the young soprano So Young Park is a revelation, hitting impossibly high notes with breathtaking purity. And as the title character, the British baritone Roland Wood could not be any better. His voice, too, is shockingly powerful. Wood convincingly portrays Rigoletto’s devastating fall from being a jerk to being the victim of the very chicanery he would have once laughed at — and the fact he understands his own culpability only makes the portrayal all the more haunting. He’s Michael Cohen to the Duke’s Donald Trump, only a lot more self-aware. Rigoletto knows he struck a deal with the devil; his anguish is only heightened by his knowledge that he deserves what he gets. 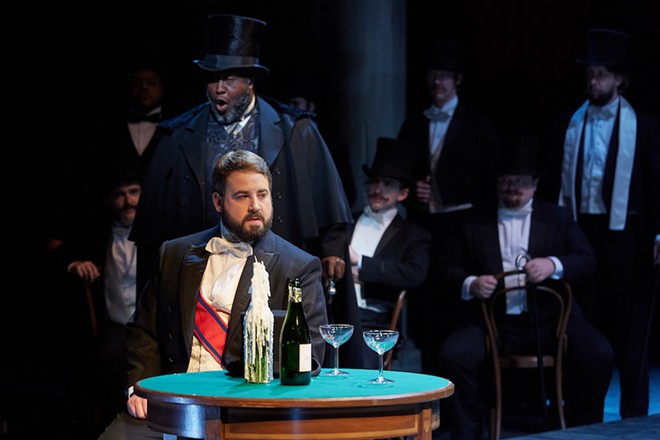 The only real shortcoming of this opera is the character of Gilda. While Ravella’s staging admirably plays up the toxic masculinity that allows a group of professional men to act like sociopaths simply to amuse each other, the director can’t do much to give their victim agency. Rigoletto doesn’t, as you might wish, fit neatly within the #MeToo zeitgeist. Yes, Gilda’s virtue has been taken, but she can’t bring herself to acknowledge the villainy of her assailant. The opera depicts her as too innocent, too devout, to cope with the reality of what’s been done to her.

Watching this stirring production in 2019, we can’t help but long for Gilda to wake up, to help us find catharsis by justifying her choice, perhaps in a final blast of song that helps us see her suicide as somehow revolutionary. Instead, Gilda humbly volunteers for her fate, offering the other cheek the way she surely learned in the convent. She is dogged in her path, it’s true, but in this era, we don’t just want determination; we want expiation.

Perhaps Christian forgiveness is simply too out of fashion to make sense to a modern audience. But our protagonist’s devastation at the end suggests that a father’s revenge is no solution either. It matters not if Gilda sacrifices herself or her father attempts to avenge her, Rigoletto suggests — either way, men like the Duke sail on, lamenting how difficult women are even as they leave them strewn as wreckage in their wake. It’s ironic that the opera’s most famous song is the Duke’s lilting third act “La Donna Mobile” (often translated as “Woman Is Flighty”) — a remarkable self-justification by a man who suffers not a wit for his toxicity. Only the little people, perhaps, must pay for their sins.