A few months ago, Paul Hamilton was on a Virgin Gorda beach, leisurely combing the sand as he often does while vacationing in the British Virgin Islands. However, unlike his prior treasure hunts, which yielded small trinkets like driftwood and coral, this one turned up the mother lode: Washed up onto the sand was a giant rope line, perfectly intact, with several buoys still attached to it. Of course, he did what any self-respecting treasure hunter would do. He gathered it up, stuffed it into his suitcase and lugged his massive haul all the way back home with him.

Buoys and driftwood are not the only pieces of the British Virgin Islands that Hamilton has wanted to bring back with him to St. Louis. Ever since he and his wife, Wendy, met in the Caribbean in the 1990s, the pair have been fascinated with the region. It was a love affair that started on a cruise line. Both worked on a ship, met and forged their relationship by exploring ports throughout the Caribbean with their fellow boat mates.

For the Hamiltons and their free-spirited cruise ship co-workers, "exploring the ports" meant hanging out in rum-fueled clubs and dive bars. Even as the pair settled down in St. Louis and built their restaurant empire (1111 Mississippi, Vin de Set, Hamilton's Urban Steakhouse), they held onto their passion for the islands and their bar culture, and they were determined to keep it a part of their lives. Buying a home on Virgin Gorda wasn't enough. Even though the Hamiltons owned a sliver of the island and could travel down there whenever their schedules allowed for it, they still longed for a way to keep that island feeling with them when they returned to St. Louis.

How Rhone Rum Bar, their seven-month-old south-city ode to the bars of the BVIs, actually came to be is decidedly less romantic, however. In need of parking for their several properties clustered along Chouteau Avenue, the restaurateurs found a parking lot that happened to come with a 10,000-square-foot building. The Hamiltons purchased the property and originally thought they'd simply use the building as an additional events space. However, as they got to talking, they realized they had the opportunity to create something that would speak to their love of the Caribbean. Armed with their personal experiences, an impressive rum collection and Paul's trinkets, the two got to work converting the vacant warehouse into their best interpretation of a BVI slice of paradise.

Their efforts clearly come from a genuine affection for their island second home. However, no matter how many buoys they stuff into their suitcases, they will never be able to bring back the island's turquoise water, sugary sand and tropical breeze. Without these impossible-to-bottle-up elements, the atmosphere never really transcends the fact that this is a converted warehouse in the Rust Belt. Even with a coat of lime green paint on its exposed bricks, several beachy photos and a thatched bar, the room never really gets past feeling like a Caribbean-themed party in a downtown loft. 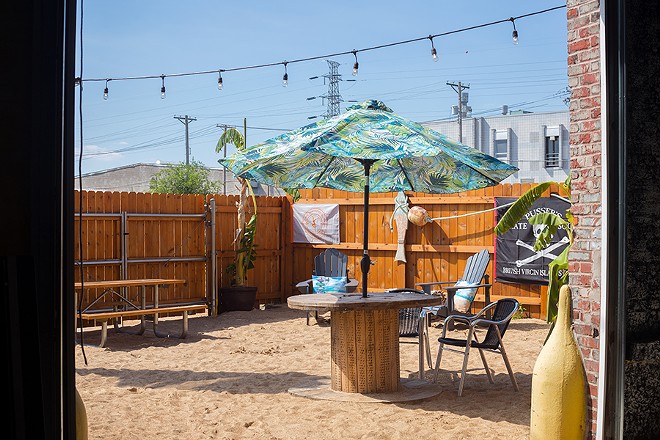 The outside space is better, due to the fact that most of it is covered in sand. If you catch it when the air is moving and not the stagnant, muggy hell that is typical of a St. Louis summer, you get a nice cross breeze through the shotgun space. The back third of the patio is the most atmospheric with rustic wooden picnic tables and a sandy floor so deep your feet sink into it. Also noteworthy is the front portion of the outdoor space, which has been converted into a sunken sand volleyball court. The smell of its damp sand reminds you enough of the beach to realize how much you wish you were actually there.

Food is much easier to recreate than atmosphere, and in this respect, Rhone does a much better job at executing a realistic piece of the islands – albeit the one that appeals to tourists. Chicken wings, coated in jerk seasoning, give a gentle, warm-spiced lip tingle you'd get at a chain hotel beach bar, but they lack the smoky depth of a locals' jerk shack. Tamarind chutney, served on the side, is a high note, its tart sweetness a nice contrast to the seasoned meat. 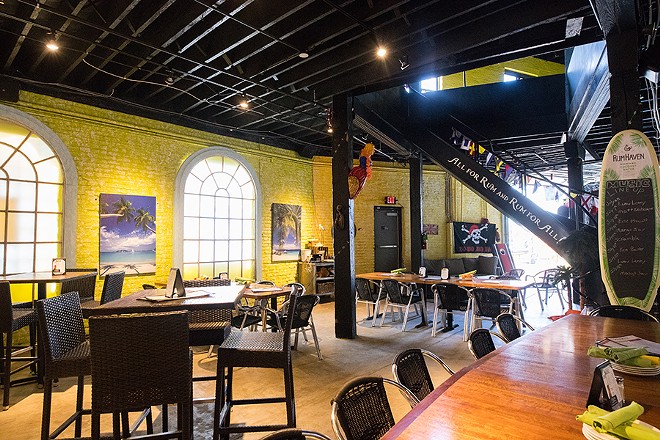 The jerk chicken also makes an appearance on the chicken nachos, a basic version of the ubiquitous bar staple that lacked impact. Though scotch bonnet pepper cheese sauce and habanero-pineapple salsa promised some heat, neither delivered. Perhaps if there were more of either, it would have made a difference; as presented, the toppings were so sparse the appetizer was little more than a platter of tri-colored fried corn tortillas with only enough beans, chicken and cheese to cover about five chips.

Conch and seafood ceviche was decidedly more transportative. The tender, citrus-kissed seafood is simply spiked with fresh herbs, allowing the fresh, ocean flavor to shine through. Taro chips, sprinkled with sea salt, are a delightful accompaniment – their simple, subtly sweet earthy taste made them one of the night's standouts.

Pig pops are also enjoyable. The small pork shanks are braised until the meat is fall-off-the-bone tender, then coated in a sticky tamarind barbecue glaze that tastes like a tropical fruit sweet-and-sour sauce. Rhone also shows it knows how to cook pork through its barbecue pork sliders. Hunks of succulent shoulder meat drip with the pork's own cooking juices and are accented with just a whisper of the tamarind barbecue sauce. The light touch allows the sauce to accent the meat and bring out its natural sweetness without taking over. My quibble with the dish is the bread choice. The un-griddled grocery store slider buns cheapened the otherwise excellent sandwiches.

The same complaint carries through to the curried chicken salad sliders. However, like the pork, the well-executed contents made the dish overall enjoyable. Yellow curry spikes the creamy chicken salad, and flecks of pineapple pico de gallo cut through the richness, adding a pleasant element of sweetness.

The Caribbean Caesar salad, topped with shrimp, transcends boring by incorporating jerk seasoning into the dressing. This detail, coupled with orange-scented croutons, makes the salad flavorful and bright, even if it still reads as something you would get at your office cafeteria's Caribbean theme day. 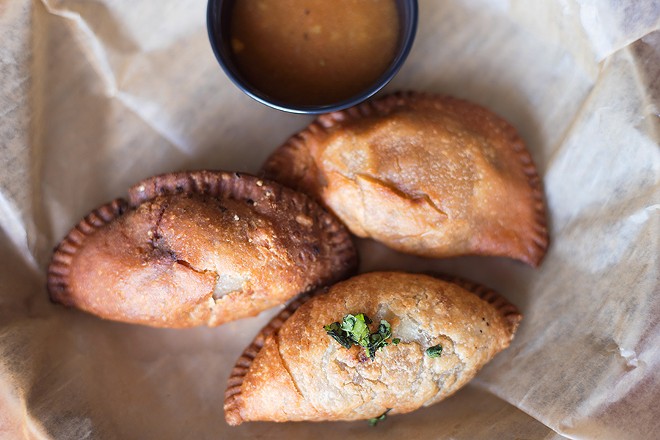 The menu's highlight is the dish that captures the spirit of Caribbean cuisine beyond the tourist spots, namely, the hand pies. The shockingly flaky crust is like a cross between a biscuit and a pie shell. It's a wonderful, deep-fried shell for three different fillings: rich curry chicken, root vegetables seasoned with ginger or beef and goat that's so tender and jus-filled it's like pot roast. I just wish there was more of them; at two bites a piece, even an order of three only whetted my appetite for more.

Food, however, is only half of Rhone Rum Bar's story. The restaurant and bar has an extensive menu of the sort of rum-focused drinks that have come to define beachy cocktail culture. None break that mold but instead offer exactly what you want out of a boozy fruit bomb, like a classic frozen piña colada loaded with so much rum you might get to the end of two and think you are on an actual beach. The "Rhone" follows this fruity-yet-potent mold, pairing two kinds of rum with wild berry and piña colada mix. Both are the sort of sticky sweet crowd pleasers that taste like an all-inclusive resort in a glass. 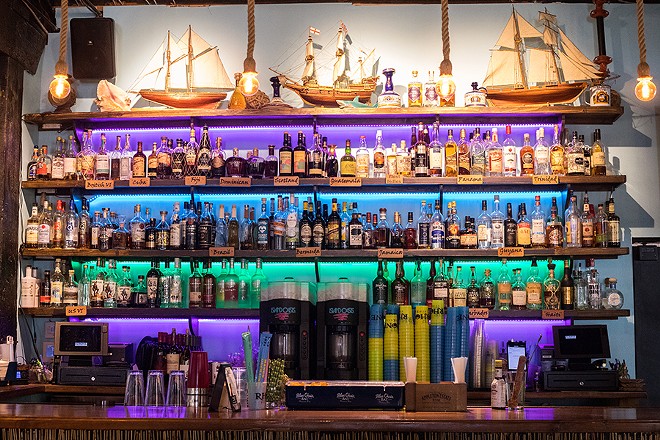 However playful the drinks, Rhone Rum Bar has a massive rum selection that will appeal to the spirit's aficionados. You can have them neat, in one of your cocktails or, even better, served in the restaurant's one dessert offering – a piña colada cake so soaked with the liquor, they won't serve it to anyone under 21. It's intensely boozy, but it balances the sweetness of the whipped cream and coconut-covered yellow cake.

I imagine that cake, in all of its easy sweetness and booze-soaked decadence, is the exact kind of Jimmy Buffett-on-a-plate confection you'd find in front of a sunburnt actuary from Pittsburgh at the Soggy Dollar Bar. I also imagine that person would have a pretty big smile on her face — mostly because she's enjoying it ankle-deep in powdery Caribbean sand. Until the Hamiltons can figure out a way to fit that in their carry-on, Rhone is as aspirational a substitute as we get. Thankfully, the drinks are strong.