The first thing you notice when you walk into ReVoaked Sandwiches — that is, after the intoxicating aroma of woodsmoke that permeates the room — is owner Stephan Ledbetter, head down, methodically piecing together sandwiches with the focus you'd see on a fine-dining chef using tweezers to place microgreens on a poached piece of halibut. Though everything below his chin is obscured by the stunning, carved-wood half wall that separates the open line from the small dining room, you can tell by the way Ledbetter maintains his posture that, though he's busy, he refuses to rush through a process as seemingly banal as placing sliced pepperoni atop a thin piece of cheese. It's completely atypical for a fast-casual sandwich shop, even one in the Central West End.

It's not, however, unexpected from Ledbetter. Prior to opening ReVoaked in December of 2019, Ledbetter was co-chef at the beloved, yet short-lived, Oaked in Soulard, an ambitious, elegant restaurant that sought to set the bar for hospitality in the area. The job was the realization of a dream for Ledbetter, a young up-and-comer who got his start in the industry at a Country Kitchen in rural Illinois, and he took every opportunity there to apply what he'd learned in culinary school and previous upscale dining gigs. And he was doing it. Together with his co-chef, Carl Hazel, Ledbetter received serious buzz for his thoughtful dishes and obvious technical abilities. With a stellar front-of-house team, a beverage program that rivaled any in the city and a beautiful setting, it seemed like the sky was the limit for Oaked.

Until it wasn't. After just eight months, Oaked closed, a shock to anyone who'd ever dined there and certainly a shock to the team, who threw their hearts and souls into creating a special place and lost it all to circumstances beyond their control (the owners cited physical, emotional and financial exhaustion in their closing announcement). Ledbetter was crestfallen and unsure of his next move until a small storefront with a "For Lease" sign in the window caught his eye while on a stroll one morning through the Central West End. Intrigued, he reached out to Hazel and asked if he'd be interested in chatting about a possible concept that would fit the space. Though ultimately a partnership between the two didn't pan out, that conversation gave Ledbetter the push he needed to take the leap to lease the storefront, thanks to a random comment Hazel made when he was looking at his computer.

"You know, it feels like we've been revoked," Hazel said, an observation that both spoke to Ledbetter's soul and gave him the inspiration he needed to craft his vision for what would become ReVoaked Sandwiches.

For Ledbetter, the name ReVoaked captured so much about what he was going through and what he wanted to do, moving forward after Oaked's closure. He was disappointed, for sure, but he wasn't bitter, and he saw the chance for redemption by way of doing something on his own terms. Sandwiches made sense for both the space and the neighborhood, but he wasn't ready to give up everything he loved about upscale dining. Instead, he was going to figure out a way to continue to do what he loved — just between two slices of bread instead of on white china plates.

Ledbetter has succeeded in carrying out that vision. Though not the only sandwich shop in the Central West End by a long shot, ReVoaked differentiates itself in just how thoughtful Ledbetter is about every last detail, from smoking his own meats to making his own condiments to even what he decides to toss his chicken salad in. The latter, an outstanding version of the café sandwich staple, pairs grilled then shredded chicken breast meat with both mayonnaise and Greek yogurt, giving it both creaminess and tang. Craisins add just a touch of sweetness, while celery, red onions, scallions and walnuts balance it out on the savory side. Ledbetter then places a generous scoop of the salad between two slices of thick, rustic toasted wheat bread that is hearty enough to stand up to the chunky filling. It's one of the best versions of the dish around.

A seemingly simple pesto and cheese sandwich is also otherworldly at ReVoaked. Here, Ledbetter riffs on a caprese, replacing the usual sliced tomatoes with a housemade tomato jam; its sweetness underscores the perfume of the peppery basil pesto. In place of fresh mozzarella, Ledbetter uses luscious burrata that forms a rich, creamy spread with the pesto and tomato jam, then accents the sandwich with a balsamic reduction and pickled red onions, and places it onto crusty bread that he pops in the oven to allow all the flavors to meld together.

Ledbetter elevates a basic BLT sandwich by using his tomato jam and adding avocado. However, the sandwich's unexpected treat — thin slices of smoked salmon — make it a standout. Similarly, his Italian sandwich goes beyond the usual deli classic; using Volpi salami, pepperoni and coppa, he layers the meats with spicy cheddar cheese, then blasts the sandwich for a few minutes in the oven. In doing this, the meats release just enough fat to mix with the cheese and form a glorious sauce that soaks into the crusty bread. It's a work of genius.

ReVoaked's take on the Cuban sandwich is more inspired than literal (it can't be a true Cuban without that crusty, pressed Cuban bread), but it does a good job capturing the spirit of the Caribbean staple thanks to its mouthwatering smoked pork belly. The meat is so good, you would be happy if Ledbetter served it to you unadorned in a bowl, but the fact that he pairs it with excellent capicola, tangy Swiss cheese and zesty bread and butter pickles makes it magical. 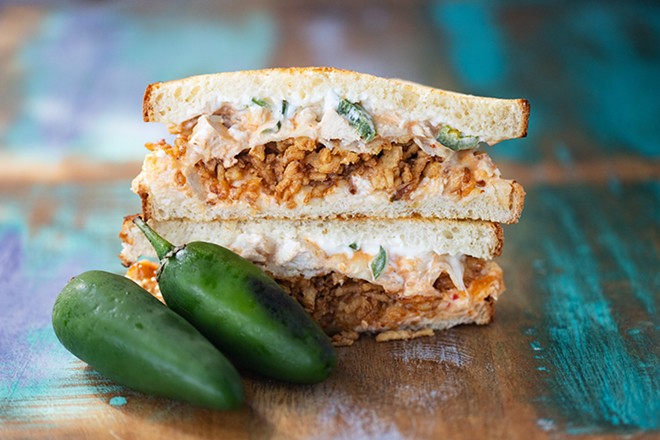 However, ReVoaked most proves its worth with its chicken popper sandwich, a dish that reads like nothing more than a stoner concoction but turns out to be one of the best sandwiches in St. Louis. For this masterpiece, Ledbetter pairs shredded chicken with cream cheese and jalapeños, making almost a bar-food-style warm chicken salad that he spreads onto toasted bread. Molten Provolone cheese tops the filling, but the piece de resistance are the crispy onions he uses as a garnish. It's unclear what voodoo he uses to get this result, but somehow, the onions make the entire sandwich taste like a fresh-off-the-presses White Castle slider.

There's something bittersweet about that chicken popper sandwich. On the one hand, it likely wouldn't exist had Ledbetter — and the rest of St. Louis — not experienced the loss of Oaked. It truly was a special place, one whose loss cuts deep considering its very short run. However, when you bite into that outrageous sandwich, the spicy, onion-y goo gushing out from the sides of the perfectly toasted bread, you understand that there can be a bit of sunshine after the storm — especially with someone as talented as Ledbetter as the rainmaker.