PHOTO BY MABEL SUEN A selection of dishes at Edibles & Essentials.

It's definitely not edible, but I'm still debating whether or not that stunning green ceramic serving dish for sale at Matt Borchardt's Edibles & Essentials qualifies as essential. Can I live without the beautiful Moroccan-inspired bowl, handmade by Borchardt's brother Anthony? Perhaps, though the fact that I've found myself staring at it every time I visit the St. Louis Hills market and café makes me wonder.

The white bean dip, on the other hand, does not raise such doubts. The creamy dip — closer in texture to mousse than hummus — has a mild, almost sweet flavor, as the fragrant herbs infused in the beans' cooking liquid give just a hint of their presence. Cloves of roasted garlic cooked to the point of being spreadable adorn the white bean puree, as do minced green olives and chili oil. The result is a bright flavor pop diffused in velvety texture that makes one thing clear: This is now an essential part of my dining happiness.

Borchardt opened Edibles & Essentials last October in the former Hampton Bakery, which had been shuttered two years prior. The chef, whose résumé includes L'Ecole Culinaire, Café Provençal, Frazer's and a consulting gig for Taze Mediterranean Street Food, envisioned the space as an artisanal market and café with a low-key neighborhood feel. Most importantly, he wanted a manageable forum that would allow him to pop in and out of the kitchen so he could balance his love of cooking with his passion for teaching.

And so you'll see Borchardt in the back making food, but most of the time he's running the front register, mingling with guests and educating people on such things as the virtues of using a particular type of key lime juice for key lime pie. It's a role that chefs seldom get to fill.

The atmosphere is that of an upscale deli: A case with everything from housemade bacon to imported macarons takes up not quite half of the space, and shelves filled with what Ruth Reichl would consider pantry staples (think gochujang and smoked salt) line the walls. Anthony Borchardt's stunning pottery warms the space with a slight Middle Eastern feel. My only quibble is that I wish they had a dimmer switch for evening service — a fact that won't be an issue once patio season comes around.

The café is not full-service per se. From the set up, it appears that Borchardt's plan is to have guests order at the counter, grab a table and wait for their items to be delivered. Borchardt seems to relish his newfound front-of-house role, however, and can't resist providing formal table service. On both of my visits, he took orders, served drinks, delivered food and bussed tables. It was an impressive one-man show, though I doubt he'll be able to keep that up when the warm weather arrives. 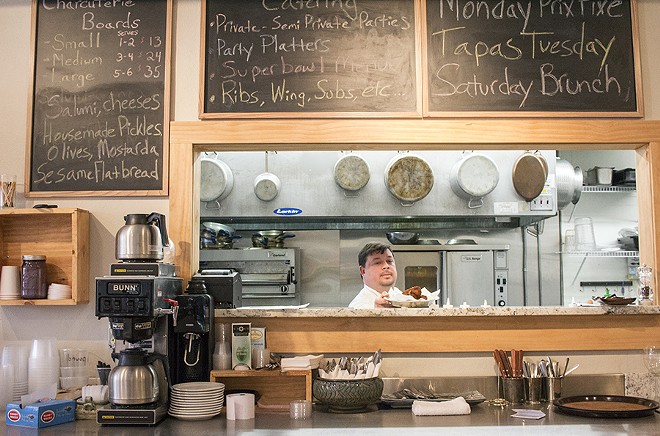 About that patio ... Borchardt was sold on the place thanks to its expansive outdoor seating area, which backs up to the football field at DuBourg High School. There's so much green space, you'll forget you are in the middle of south city.

The food at Edibles & Essentials proves worthy of that view. Borchardt's Caesar, for instance, raises the bar for the ubiquitous and oft-mediocre salad. The version here comes with more of a vinaigrette than the traditional creamy dressing style. It's as anchovy-heavy as bagna cauda, balanced by a mouth-puckering punch of lemon juice. Borchardt says he will put his Caesar up against any other one in town — and after eating it, I'm convinced that's not a controversial statement. 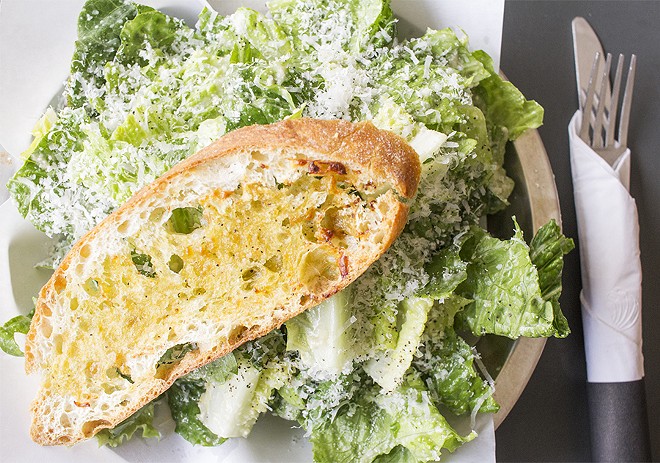 But it's not just salads that Borchardt does well. His menu is eclectic, drawing on everything from Middle Eastern fare to homestyle Southern cooking. His chicken wings are lightly smoked with a sweet and savory seasoning rub. The accompanying blue cheese dressing has a subtle sweetness that pairs beautifully with the wings.

Fried pork ribs, another Southern-inspired appetizer, are lightly dusted with breading — they're like a corn dog versions of ribs. On their own, the ribs lack seasoning, but it's clear that's intentional after dipping them in the Alabama-style barbecue sauce. The creamy, mayonnaise-based sauce is enlivened with mustard and horseradish, giving it a powerfully piquant flavor.

One evening's special, bacon-wrapped pork tenderloin, was cooked so that it was beautifully bright pink. The plump meat was cut into medallions and served atop textbook-perfect mashed potatoes with sautéed spinach. The maple butter drizzle did not figure as prominently as I would have hoped, though the meat was juicy enough not to need a sauce.

The mushroom tart, a cup-shaped puff pastry overflowing with mushrooms, Madeira and cream, is nothing short of luxurious. The dish would be overwhelmingly rich, but it was offset by a refreshing fennel and arugula salad. It's dressed with truffle vinaigrette, which brings out the mushroom's deep umami flavor. For a vegetarian dish, this tart is as satisfying as a well-marbled steak.

The Moroccan chicken shows that Borchardt's tenure at Taze made him proficient in Middle Eastern cuisine as well. A chicken thigh, rubbed in cinnamon-forward North African spices, is braised, then placed atop green olive and raisin-studded couscous. His housemade harissa, served on the side, imbues the meat with fiery flavor. This is Middle Eastern comfort food.

I've seen far too many flourless chocolate tortes in my day, but the one at Edibles & Essentials stands out because of its crunchy, Magic Shell-like exterior. I enjoyed it, but the real sweet treat was a simple piece of blueberry coffee cake that happened to be left over from that day's brunch service. The buttery crumb cake texture tasted of almond, while a simple, sugary glaze coated the top. If this exemplifies the café's brunch, there should be a line out the door.

And indeed, that line should come. Borchardt has created a charming neighborhood spot with delicious food that is destined to become an essential part of the South Hampton dining landscape. As for that ceramic bowl, it's coming home with me one of these days -- so long as it's filled with that white bean dip. 0x006E