If you ran the numbers, VietNam Style owner Thao Truong seemed to have it all figured out: Seven years of learning English as a new arrival to this country, one bachelor's degree from Maryville University and one semester of MBA studies. Still, something didn't add up for the aspiring actuary scientist.

"After high school, I knew exactly who I was. After I graduated from college, though, I had no idea," Truong confesses. "I've never been more unsure of anything in my life."

Truong couldn't explain why she felt the way she did; she just knew that she wasn't feeling her chosen career. She found her happiest moments working with people, not math. At Maryville, she thrived as one of the leaders of her international club, arranging extracurricular activities for her peers. And as an advisor for international students, she was especially happy helping them navigate the transition to their newly adopted country — something she'd done herself when she immigrated to the U.S. just years before, at eighteen.

But really, Truong felt most alive at her part-time job, managing a Vietnamese restaurant in west county.

Truong's comfort in the food business went back to her days as a young girl growing up in Ho Chi Minh City (formerly Saigon). Her mother owned her own restaurant and would send Truong to the market to gather the day's wares — freshly picked vegetables, fish that were still alive. If something wasn't up to her mother's high standards, she would send her daughter back to the market until she got it right. Truong learned everything she could about food under these circumstances, watching as her mother perfected recipes and eventually making them herself.

She didn't plan on being a professional cook, though. That she left to her husband, Yun Vu, a trained pastry chef who had his own business in Vietnam. After Vu and Truong married two years ago, he moved to the U.S. so that the newlyweds could begin their life together. He would find a job doing whatever he could and Truong would get her MBA.

VietNam Style changed those plans. After lamenting the food they'd left behind in Ho Chi Minh City, Truong and Lu decided to do something about it. Armed with her mother's old family recipes and Vu's pastry background, they opened the fiercely authentic Vietnamese restaurant on the eastern end of the Loop three months ago, converting the short-lived Cabana in the Loop space into a bastion of southeast Asian cuisine.

At first, Truong thought it would be a part-time gig — something she could do while remaining in school. However, this past semester, she decided to take a break from her studies and focus on the restaurant full time.

In some ways, her decision to do so is reflective of her approach to food. In Truong's opinion, the other Vietnamese restaurants around town serve good food, but they get bogged down in trying to take on too much. They have Vietnamese food, sure, but it's mixed in with Chinese food and Thai dishes. The lack of focus, she believes, waters down the authenticity.

In this sense, VietNam Style operates outside of the typical Vietnamese restaurant template. The menu is fairly small, consisting of a few appetizers, sandwiches, soups and entrees, and you'll find what you expect: bánh mì, pho, spring rolls. However, it's the lesser-known offerings that make the restaurant such a gem. These dishes may not be as familiar to American diners, but they're the ones being served in the Vietnamese restaurants in her home country, Truong says.

My, what we have been missing. Take the "Viet Style Cheese Wraps." The golden wontons masquerade as generic crab Rangoon — until they are pierced open to reveal a half-cooked quail egg yolk. The yolk mixes with cream cheese to form a rich, earthy center.

VietNam Style's other deep-fried appetizer, the egg rolls, are more familiar, but they're also expertly prepared. Paper-thin rice-paper wrappers are stuffed with ground shrimp and pork, accented with shredded cabbage and carrots. The texture is so delicate that the rolls flake apart like the crispy top of a classic French croissant.

Combination spring rolls — so large they could be mistaken for a small burrito — are overstuffed with shrimp, slices of beef and julienne vegetables. The sticky rice-paper wrapper can barely contain the generous portion of fresh herbs that anchor the filling with cilantro perfume and bright mint.

The restaurant's well-executed bánh mì is typical of what you look for in a Vietnamese sandwich. The pork version came with thin slices of succulent roasted meat and sunny-side eggs that mingled with the pork's glaze to form a mouth-watering sauce. Radishes, cilantro and sliced jalapeños cut through the richness.

I enjoyed VietNam Style's pho more than other versions in town, largely because of the broth. The clarified beef liquid is so delicate, it dances on the tongue, and the heavy perfume of licorice from star anise adds a stronger punch than what is commonly found in pho broth. Slices of tender filet, tendon, vermicelli and vegetables bob in this wonderful nectar — though really, I could have been served a side of that broth in a cup and considered this dish a success. 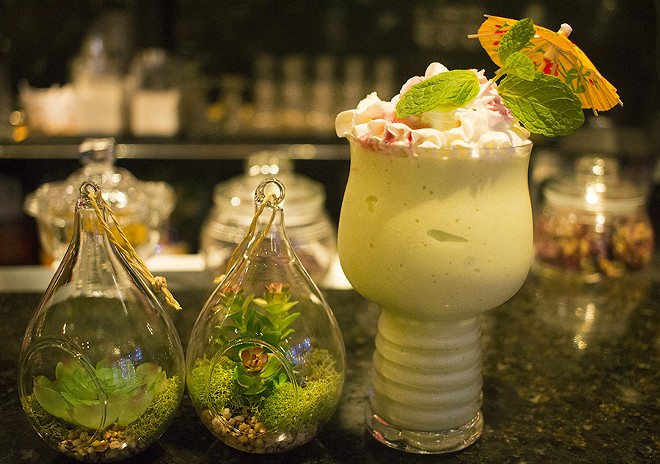 A grilled pork chop, served over broken rice, sounds simple based on the menu description, but what arrives is anything but. Lemongrass, ginger and soy glaze the thin strips of meat; paired with the bitter char from the grill, the taste touches every part of the palate. Ribbons of crunchy pork skin, served as a condiment on the side, add fatty depth, while a simple slaw of daikon and carrots brings a refreshing note. The dish is also served with a triangle of wonderfully fluffy egg soufflé that evoked a slice of cornbread served alongside barbecue pork ribs.

VietNam Style's signature dish is its sizzling steak, a dish that has grown in popularity in Vietnam over the last ten or so years. If your thoughts of surf and turf are limited to a filet and a lobster tail, please go straight to this wonderful restaurant and order the house special version of this magnificent entrée. A slice of filet mignon, brushed with a hint of garlicky soy glaze, is served on a searing hot skillet (think fajitas) with a side of pâté and a large, grilled sardine. Truong and Vu make the pâté in-house, and it's by far the best I've had in town — the liver is juicy, tender and crumbles apart with the slightest prodding. The taste is delicate — the metallic liver notes are there, but they're mild, especially when mixed with the beef and the cooking jus. And the sardine — let's just say this plump, fresh fish makes it seem criminal to call those oily things served in cans by the same name. VietNam Style serves all these offerings with a side of crusty bread. I think the point is to make sandwiches, though I just found myself using the bread to soak up every last morsel of this symphonic flavor bomb.

Instead of dessert, we opted for Truong's avocado smoothie, something she says reminds her of ones her mother used to make back home. Sweetened condensed milk adds richness to the ripe avocado, and just a hint of vanilla infuses the drink. I could have closed my eyes and sworn I was at a table in a bustling Saigon cafe.

Truong often walks around the room, handing out samples of her delicious smoothies just for the fun of it. She beams when she does so, as if she's finally in her element. And if you watch her tally up the bill from behind the counter, she maintains her smile the whole time. This, it's clear, is the kind of numbers work she was meant to do. 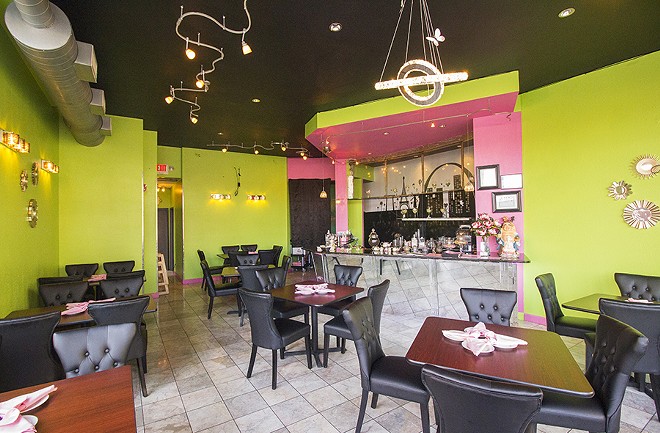 Turn the page for more photos of VietNam Style.