PHOTO BY MABEL SUEN An array of sandwiches at Truffles Butchery -- and, oh, that pot pie!

Once upon a time, a tiny, artisanal butchery shop opened in Ladue. Truffles Butchery, as it was called, aimed to fill a void in the St. Louis food community — a butcher counter of a bygone era where you bought meat from a guy in a white coat who knew your specs and always tipped the scale in your favor.

The place would be unlike anything St. Louis had seen, at least since the advent of shrink-wrapped meat sold in sterile grocery stores. It would feature local, humanely-raised meat. It would sell “off cuts.” It would have its own aging room, lined with pink Himalayan sea salt.

And it would be all but forgotten when its alter ego opened up a few months later. Perhaps I am being overly dramatic. It’s not as if Truffles Butchery, the meat counter and small market that sits adjacent to its sister concept, Truffles Restaurant, is struggling in any way. If anything, business appears to be good at the year-and-a-half-old shop, as evidenced by the steady flow of regulars and the fact that its chicken pot pie might as well have a waiting list.

There’s no denying, however, that the buzz that surrounded Truffles' October 2014 opening has been drowned out by the butchery juggernaut that is Bolyard’s Meat & Provisions. And that is curious to me.

This is not to take away from Bolyard’s. The Maplewood shop deserves every accolade it receives — personally, one of the best meals of my life involved a pork chop purchased there. I just find it a little odd that it dominates the foodie conversation in St. Louis when the folks at Truffles Butchery are doing basically the same thing.

Steve Caravelli, Truffles Butchery’s executive chef, chalks up his shop’s lower profile to the fact that it aims to be the quintessential corner butcher — an amenity to the folks who live in the three-mile radius surrounding the Clayprice shopping center, rather than a destination spot. The atmosphere certainly conveys this. The small, one-room shop looks like something you’d see in Midwest Living.

There is no room to eat inside — the butchery is strictly a grab-and-go operation. What little space exists is equally divided between the butcher counter on one side and high-end provisions such as artisanal jams and local honey on the other. The low ceiling, brick-colored stonework and wooden shelves create a warm feeling, as does the heavenly smell of smoked meat and spices that hits you when you walk through the door. The showpiece lies at the far end of the space: a dry-aging and curing room with, yes, pink Himalayan salt-lined walls on three sides. The fourth side is mostly glass so patrons can see the shop's wares in various states of aging.

I’d heard the butchery had an excellent sandwich counter, but I always felt too self-conscious to drop by with the junkiest car on the lot. I wish I’d had gotten over that sooner. The small — and surprisingly economical — menu covers the basics, but it’s the extra touches that elevate the sandwiches from the usual deli-meat-on-white-bread fare. Truffles’ turkey, for instance, is brined, rubbed with Cajun spices and smoked so that deep, savory notes permeate the meat. It’s sliced thin and piled on house-made ciabatta with lettuce, tomato and a mouth-puckering mustard aioli.

Roast beef is equally impressive. Caravelli & Co. rub the meat in spices, then sous vide it, in essence steaming it to a perfect rare. Traditional horseradish cream and cheddar cheese finish off this Platonic form of a roast beef sandwich.

The Truffles team does not make the meats that fill the Godfather — prosciutto, capicola, salami cotto, coppa and mortadella (they go through too much to keep up with the demand), but they do know how to assemble an Italian sandwich that rivals what’s found on the Hill. The portion of fatty meat is monstrous, but homemade giardiniera cuts it with delicious, fiery heat.

Peppery pastrami and house-fermented sauerkraut combine for the butchery’s ode to the Reuben. Instead of Thousand Island dressing, however, this version is slathered with rich “Comeback” sauce, a similar, yet spicier, chili/mayonnaise-style condiment that originated in Mississippi.

Truffles goes more classic with its chicken salad, a creamy — if not overly white-pepper heavy — pulled chicken and herbed concoction placed atop ciabatta. The shop also offers a fried chicken version, but something about combining mayonnaise and chicken skin gave me pause.

It’s no surprise the pulled pork was spectacular, considering that the butchery uses spectacularly marbled heritage hogs. The excellent spice rub, however, shows that they aren't relying solely on the quality of the meat. The thyme-forward rub forms a crust on what seems like each delicious chunk of pork. It’s sauced, though so lightly it may as well have been nothing more than spice-infused drippings. It’s served with white cheddar cheese on ciabatta, though I could have cut to the chase and eaten it out of a to-go liter. 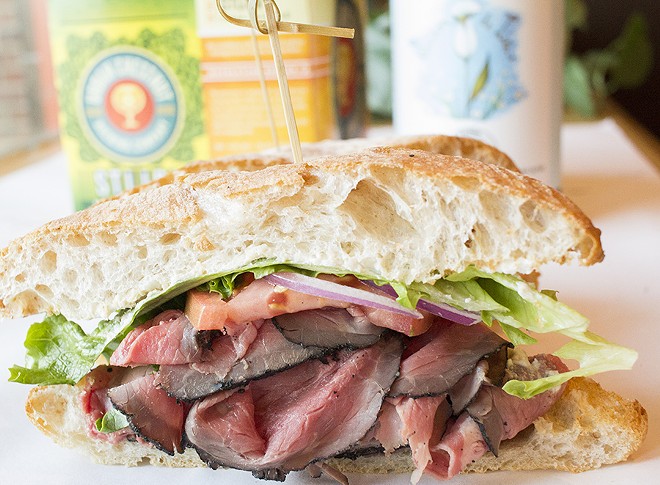 I was also lucky enough to get my hands on one of the butchery’s hard-to-come-by takeaway pot pies, and now I understand the fuss. The golden-brown shell is basically butter in flake form. Even after a minute in the microwave (I grew impatient with the oven heating instructions), it remained a crisp container for the creamy chicken and vegetables inside. Your Southern grandma would bow her head in reverence to this perfect example of down-home cooking.

Though Grandma would probably feel the need to wear her Sunday best to pick one up, if she even went to Truffles at all. The Ladue address is intimidating, and I know I can't be the only 99 percenter who feels awkward walking in surrounded by the area's finest-heeled residents.

But I'd argue that this feeling has less to do with any real difference between Truffles and a place like Bolyard's and more about perception. We’re obsessed, in St. Louis, with dividing one another up by socio-economic class. Substitute “where do you buy your meat” for “where did you go to high school,” and you’ll be able to neatly categorize a person.

It doesn't have to be that way — and biting into my gargantuan $7.99 turkey sandwich, I realized this butchery is no less accessible than any of the other sandwich counters I’ve visited in the city’s more blue-collar corners.

My erroneous perceptions made me just as guilty as everyone else for not paying attention to this gem. It’s a good thing I got over them. This is a meal I would have hated to miss.