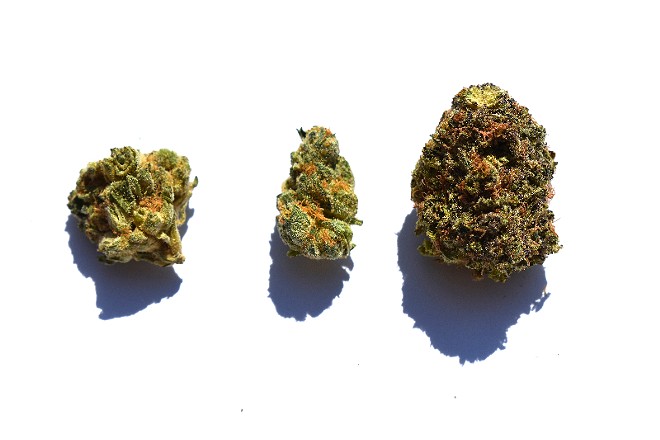 This new era of police friendliness toward cannabis is never going to stop being surreal for those of us who have ever spent time in a cell over the stuff.

I still vividly remember, many years ago, being arrested in the parking lot of a St. Louis County mall after a passing cop rolled by the car I was in and saw me hit a joint. As I recall, the handcuffs he put on my wrists were fairly tight, but when I asked him if he could loosen them, he walked back over to me and tightened them another click. By the time we got to the station, my hands were numb, and the officer offered a smarmy faux-apology as he removed the cuffs upon our arrival.

“Sorry about that,” he said sarcastically, a wide grin stretched across his face. “I had to make sure you couldn’t go for my gun to shoot me or anything.”

“Oh, I’d never do that to you,” I replied, matching his tone.

But fast-forward to the present day, and things have changed considerably. And nowhere does that change feel more stark than at the north county location of Heya Wellness (10417A St Charles Rock Road, St. Ann; 314-656-6362). Situated in the same exact parking lot as the St. Ann Police Department, Heya’s relationship with the local cops is such that they can often be found hanging out in the dispensary’s lobby, working as security guards. On a recent visit, when the shop’s ATM was down, I asked the officer at the front where the next nearest ATM might be. Our conversation was considerably more friendly than the one I had with an officer those many years ago.

“Excuse me, do you know where the nearest ATM is so that I can buy some weed?” I asked, amusing myself.

It’s an odd contrast of experiences, but, of course, it’s also a sign of the times, when weed is not only legal medicinally, but also profitable enough to supplement the salaries of local off-duty cops. And one visit to Heya’s sleek, decidedly hip location makes it obvious that they have plenty of money to play with.

Upon entrance to the dispensary, you walk into a lobby with a small waiting area furnished with chairs and a coffee table, with a front desk manned by an employee and a gorgeous, resin-coated wood floor underfoot. A skunky cannabis smell is prevalent within, and even from the parking lot, owing to Heya’s nearby cultivation operation. Hell, you can probably even smell it from the police station. 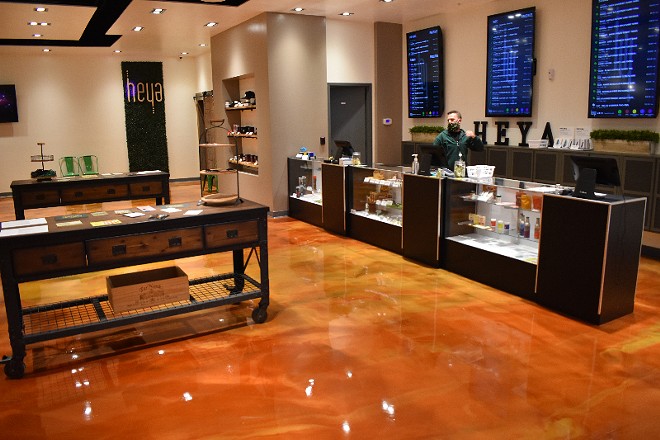 Upon handing over my ID and medical card I was brought to the sales floor, with cannabis products and accessories lining the walls of the spacious room on wooden shelves and large LED screens displaying the shop’s menus. My budtender led me to the registers, where we discussed the products on hand.

Heya has a rather large selection of strains, concentrates, vape cartridges and edibles, owing in part to the brand’s status as a vertically integrated operation with its own cultivation and manufacturing arms. At the time of my visit, they had more than twenty varieties of flower in stock, including eighths of such highly regarded strains as Runtz, Dosi Pop, Grease Monkey, Purple Sunset, Scooby Snacks and Mama’s Pie. On Fridays, the Heya branded products are 30 percent off and all other products are 10 percent off, so I went with some Heya-branded Grease Monkey and Mama’s Pie eighths ($38.50 each), as well as a Flora Farms eighth of Purple Sunset ($32.40) for variety. After taxes, my total came to $123.47.

I dug into the Grease Monkey first, rated at 27.55 percent THC. Upon opening the bag I was greeted with a pungent, earthy smell with some fuel-like spiciness hitting way up in my sinuses. The buds within were on the smaller side; as it turns out I’d purchased some “budlettes,” or popcorn buds, without realizing it, but that’s not a problem for me because those often come at a discount and they smoke the same. These little guys were green in color, highlighted by bits of white and orange, and the dense but light buds crumbled easily on breakup, with very little stickiness. On inhale, that spicy, fuel-like sensation was more prominent, with hints of wood as well. I wrote in my notes that it made me think of “an unknown seasoning blend one might use for a holiday meatball I’ve never had.” As for effects, the first thing I noticed was a puffiness under my eyes, then an elevation to my overall mood — I’d been moderately irritated at the end of a long day when I’d started smoking, and afterward I felt much more relaxed and chipper. It also works very well for pain. I’d been hurting particularly bad on this day — maybe that had something to do with my level of irritation — but that all melted away after one bowl. My budtender had noted that this strain was a favorite among the shop’s customers, and it’s easy to see why: I found myself happy and relaxed, chatty and free of pain, and somewhat giggly. All in all, an outstanding strain.

Next, I got into the Purple Sunset. A Flora Farms affair rated at 15.76 percent THC, the bag gave off a rich coffee and grass smell when opened, and the buds within were compact but not tiny, and darker green on the outside with a lighter green core. The outside was also covered in glistening resin, with bits of white and orange throughout and chunks of purple, like chocolate chips in a cookie. On breakup, this strain is pretty sticky, with keef transferring to my fingers that I found difficult to wipe off. On inhale, it brought a complex spiced flavor, smooth and tasty, rich but not sweet. After a few hits, I began to feel relaxed in both mind and body, but not debilitated or couchlocked. I watched a video of a monkey riding around on a goat, both of them eating berries, and it was fuckin’ delightful. I also found it to be decent for pain and fairly appetite-inducing — definitely good weed, if perhaps lacking a little in character.

Finally, I tried out the Mama’s Pie. Another Heya-branded bag of budlettes, this strain clocked in at 27.35 percent THC, and its tiny, well-formed buds were a tight mixture of lime to dark green, with orange hairs and a white frosting of keef — I wrote in my notes that it reminded me of a cracked, multi-colored Skittle. On both smell and taste there was a prevalent fuel-like presence and a light sweetness. As for effects, it seemed to be a pretty balanced hybrid, which is a little odd because its parent strains, Big Bud and Blueberry, are both indicas. It felt like more of an upper, creative high than I would have expected considering its genetics, though a bit on the introspective side. I was left feeling peaceful and relaxed, not anxious, not stupefied, alert and feeling good. I think the key descriptor here is “well-balanced.”

In all, it’s plain to see that Heya is poised to become a heavy-hitter in the local cannabis market. Between the excellent strains put forth by its cultivation arm — especially that Grease Monkey, good lord — and the hip retail spaces that comprise its dispensaries, it’s clear that the minds behind the brand are dutifully putting in the effort necessary to elevate their operation above the competition.

I mean hell, even the cops love ’em. And as my wrists can attest, those guys can be a hard sell.

Thomas K. Chimchards is RFT’s resident cannabis correspondent. Email him tips at tommy.chims@riverfronttimes.com and follow him on Twitter at @TOMMYCHIMS.