Review: The Slider House Does the Little Things Well

Norman Rockwell could not have painted a more compelling portrait of 2016 Americana than the scene at the Slider House. The three-month-old Rock Hill restaurant is the embodiment of suburban utopia: Children romp through a fountain just off the restaurant's patio while mom and dad — decked in Tory Burch flip-flops and trendy graphic tees — recline in Adirondack chairs and sip cans of craft beer served in koozies while waiting to eat mini burgers. It's the restaurant equivalent of trading in your coupe for an SUV: It may not be the hot rod of your youth, but that extra legroom sure is nice.

In other words, the Slider House is exactly the restaurant you'd want on the busy corner of Manchester and McKnight, smack dab in the middle of the inner 'burbs. This isn't a back-handed compliment. If you're a parent, going out to eat with kids is just plain awful. I'm one; I know. At any given moment, my toddler could go from happily noshing on a grilled cheese to flinging herself on the floor because someone sprinkled parsley on her French fries. When a place that doesn't involve sodium nuggets and a red-headed clown "gets it," you breathe a sigh of relief that you're dining without judgment. Put me in the Grant Achatz camp — there's a time and a place for taking a child to dinner, and it isn't Alinea.

It is, instead, a place like the Slider House: somewhere that's loud enough to welcome a child's shrieks, has enough open space for the little monkeys to run around, serves sufficiently interesting, but still uncomplicated, food and has readily available booze. The fact that Slider House ticks all of these boxes surely explains why the place has a 90-minute wait on any given weekend. It's not the food. Sure, it's good enough, but the throngs of patrons who have packed this place since it opened in March likely don't care whether the restaurant serves miniature sandwiches, tiny pizzas or fusion tacos. They just want something that appeals to the kiddos while still allowing them to retain their humanity.

The Slider House achieves this, first and foremost, by its atmosphere. Though the restaurant is both a chain (the original, and at this point only other, location is in Nashville) and located in the county, it feels like a family-friendly version of a trendy spot you'd find in a neighborhood where people don't give a second thought to school districts. The restaurant's bones are industrial, with touches of grayish-white subway tiles and contemporary Western-style accents. An enormous metal fan covers nearly half of the lofted ceiling, and two garage doors open to the patio, which is filled with picnic tables. The result is a loud, raucous scene — good for covering up the screams of young children, bad for hearing anything your server says. I wouldn't be surprised if the restaurant gets a few workers' compensation claims for laryngitis based on how much the wait staff has to scream to be heard.

I'm glad the noise didn't make me miss my server's recommendation for the Brussels sprouts and artichoke dip appetizer. More Brussels sprouts gratin than an actual dip, the creamy concoction was a welcome riff on the traditional spinach dip peddled just about everywhere. The halved Brussels were cooked enough to soften while still retaining a snappy texture. Lemon zest brightened the otherwise decadent dish.

Fried dill pickles are exactly what you want when you order such an appetizer — salty, crunchy and served with a side of creamy ranch for dipping. A touch of spice deepens the flavor. Wings are equally well executed. A hot chili and black pepper-heavy spice rub coats the juicy wings and drummies; it's the ideal canvass for the "Southern Comfort" sauce, a subtle glaze the consistency of a chili oil. I can't think of a better appetizer for picnic tables and canned beer.

For a place that specializes in miniature sandwiches, the Slider House has a respectable selection of salads. The "Lobster Cobb" is tailor-made for a country club. Hunks of butter-poached lobster sit atop greens, tomatoes, red peppers, bacon, blue cheese and hardboiled eggs. Lemon herb vinaigrette enhances the lobster's delicate flavor without covering it up — I just wish the bowl had more of the shellfish. Though the serving was massive, it contained just four bites of lobster.

The "Garden and Grain" salad would be equally at home at a vegan/paleo restaurant as at this sandwich joint. Shaved kale and quinoa are accented with pistachios, cranberries and a delicate lemony dressing. After eating burgers, hot chicken and fries, it was a welcome palate refresher. 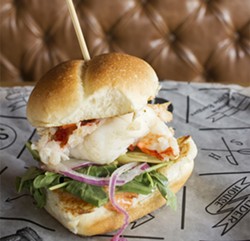 But really, the restaurant's calling cards are the eponymous sliders, which range from the expected to the creative. The "All-American" slider is the restaurant's mini-burger, a ground beef patty topped with melted cheddar and garnished with the traditional lettuce, tomato and onion. It's next to impossible to take temperatures on such small burgers, so unfortunately, they all come cooked to medium-well. This tends to dry out the beef, though the garlic aioli somewhat mitigated this factor.

The "Texican," a spicy blend of chorizo and ground beef, avoided this problem thanks to the sausage's fat content. The already spicy patty is covered in molten pepper-jack cheese and liberally garnished with diced jalapenos. The spice level is deliciously hiccup-inducing.

Surprisingly, the same cannot be said for the "Nashville Hot Chicken" slider. The breaded white meat chicken has a touch of dull heat, but it was barely noticeable through the coleslaw and pickle toppings. It was adequate, but go ahead and skip this one if it means passing on the "Bay of Pigs." This play on the Cuban pairs shaved ham with slices of juicy pork tenderloin. Lacy Swiss cheese, Dijon sauce and a pickle give a mouth-puckering tang to this exceptional sandwich.

Sadly, the restaurant's biggest miss came courtesy of a St. Louis collaboration. To make the place seem less like a chain, the Slider House partnered with local chefs for a specialty dish. The result, "the B2," comes from a three-way collaboration between the restaurant, the James Beard-nominated chef Ben Poremba and acclaimed butcher Chris Bolyard. In theory, their haute burger sounds incredible — grass-fed local beef, limburger cheese, pickled green tomato, beer-braised cippolini onions, candied bacon, arugula and truffled artichoke aioli. With so much going on under one small, gluten-free (and extraordinarily dry and tough) bun, though, the entire thing seemed over-thought, with all the flavors jockeying for attention and none of them grabbing enough of it. Whether this was a problem of design or execution is debatable, but one thing was certain: This was not good.

The lobster slider fared much better. Butter-poached lobster was topped with picked green tomatoes and a simple tarragon aioli. It was the Occam's razor to the B2 — the simplest preparation is probably the best one.

As much as I enjoyed that slider, the best part of the meal was when our server — seeing how stressed my sister-in-law and I were as we wrangled three children under five in the midst of successive meltdowns — shoved a beer and a glass of wine in our hands. "I have a four-year-old. You've had to wait too long for these. They're on us," she told us.

At that point, it didn't matter that my burger was overcooked. She made sure we weren't, and that's all that mattered. 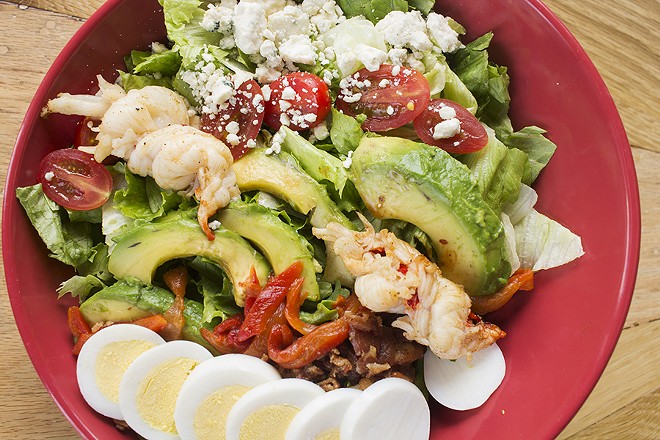 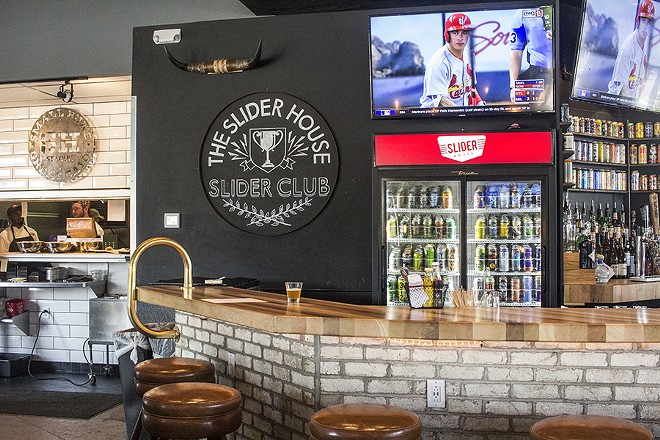