Review: The Sliced Pint Is a Solid Downtown Destination

PHOTO BY MABEL SUEN Any pizza at the Sliced Pint can be made into a t-rav pie, with toasted ravioli filling stuffed between two crusts.

And yet, after trying my first-ever bite of toasted ravioli pizza at the Sliced Pint, the new pub in downtown St. Louis, I'm as mystified as ever. Though I assumed it would be nothing more than a mediocre riff on a calzone, it presented like one of those Chicago-style, sauce-on-top deep dish pies found around Rush Street. The Sliced Pint's pizza-makers start with hand-stretched, thick-crust dough, top it with a generous layer of ground beef "ravioli filling," cover it with another layer of dough, then smother that layer with sauce, cheese and your toppings of choice. I opted for simple mozzarella and roasted garlic and was pleasantly surprised with the result. The chewy crust, well-seasoned beef and spicy marinara sauce mingled for a lasagna-like taste with the texture of a New York style slice; molten mozzarella capped off the dish with cheesy baked goo. It may not be a thing yet, but man, it should be.

If toasted ravioli pizza might be the next big thing in St. Louis eating, however, the Sliced Pint has much humbler ambitions. Owned by real estate developers Amy and Amrit Gill and operated by co-general managers Chris Hart and Joe Wicks (the foursome also responsible for O'Shay's in the Grove), the three-month-old Washington Avenue spot wants to be a straightforward comfort food destination — the kind of place where the remaining suits downtown can grab a bite for happy hour or beleaguered parents can take their brood after a full day at the nearby City Museum. Unless you consider toasted ravioli pizza to be revolutionary, the Sliced Pint isn't exactly pushing the dining envelope. But enough special touches are on offer to help the place meet — if not exceed — expectations. 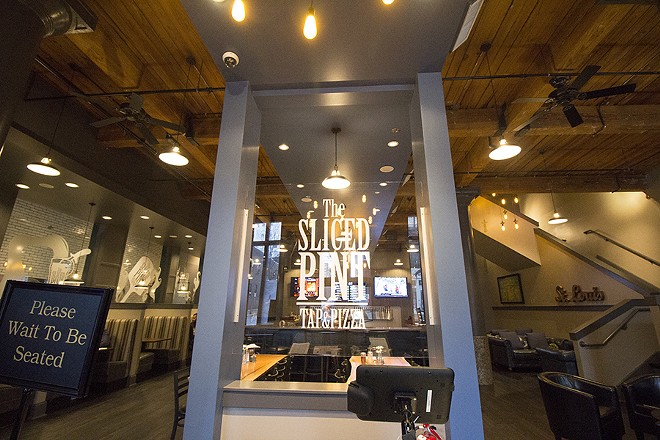 Consider the décor. If the idea of a beer and pizza joint conjures up visions of wood paneling and neon beer signs, you'll be shocked by the Sliced Pint's modern, tasteful vibe. White subway tiles and French blue walls bring understated elegance to the lofty room. Grey upholstered couches and low-profile tables and chairs dot the lounge area, and food-themed paintings by local artists adorn the walls. It's a chic yet cozy spot, and its good looks, coupled with the welcoming hospitality, might be enough to make you a regular if you worked or lived in the area.

The beer selection alone is enough enticement to frequent the place. The Sliced Pint has 35 beers on tap and even more offerings in bottles and cans; nearly all are craft labels, with a significant representation of local breweries. Even more impressive, our mustachioed bartender was earnestly enthusiastic when asked for guidance and gave thoughtful, judgment-free advice to this admitted craft beer neophyte, an experience that's more refreshing than a grapefruit-forward IPA.

The Sliced Pint's menu ticks off all the boxes you'd expect at a modern pizza joint, with a selection of quirky pies that go far beyond pepperoni and cheese and a handful of bar food-inspired finger foods. The toasted ravioli appetizer shows the benefit of making this local staple in-house. Discs shaped like flying saucers are stuffed with succulent beef and fried to a crisp golden brown. Mouth-puckering garlic and oregano-spiked marinara served as a punchy dipping sauce.

The vegetarian toasted ravioli are stuffed with a creamy spinach, artichoke and cheese concoction. It's a pleasant riff, though the accompanying Parmesan cream dipping sauce was too decadent of a pairing. Fried cheese dipped in cheese may sound hedonistically good in theory, but it results in imbalance.

Pizza nachos — strips of fried dough topped with marinara, green peppers and cheese — are forgettable, but that same dough is put to much better use as a canvas for the Sliced Pint's rich buffalo chicken dip. A mainstay of crockpot-themed Super Bowl parties, this guilty pleasure is the decadent result of mixing hot wings and cream cheese. It not exactly haute cuisine, but after a long day and a few pints of beer, it's the sort of simple comfort you want.

All pizzas at the Sliced Pint come in either thick or thin crust (with the exception of the toasted ravioli version; that one defaults to thick crust), and follow the California Pizza Kitchen template with unconventional toppings. The "Greek Fire," basically a gyro in pizza form, subs in tzatziki sauce for the traditional marinara and covers it with strips of gyro meat, onions, lettuce, tomatoes, olives and feta cheese. I chose thin crust for this one, and though the crisp, cracker-thin dough was enjoyable, it was very small — more of an appetizer size than what you'd expect for a full meal.

The thin crust worked better for the "Jane's Addiction," a BLT-inspired pie that, like most of the other pizzas on the menu, is named after a '90s-era band (be still, my Gen-X heart). Crumbled bacon and melted mozzarella are baked into the shell, then topped with crisp lettuce, tomatoes and a drizzle of garlicky mayo. I'm not sure what Perry Farrell has to do with bacon, but I enjoyed this enough not to concern myself with such things. 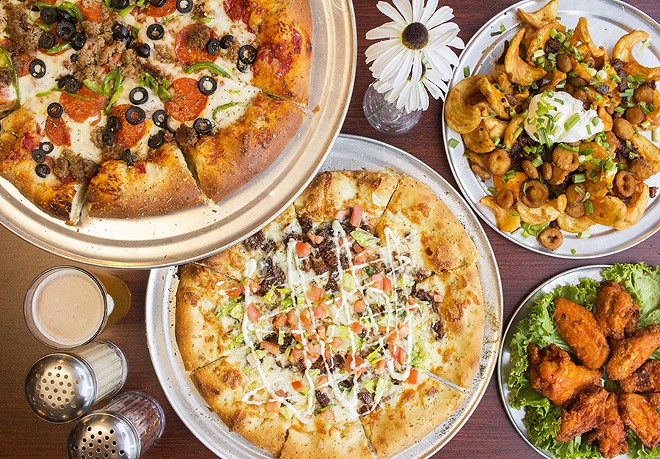 The Sliced Pint's Indian-inspired pie, the "Shankar," is another example of restaurant's success in blending genres. Warmly spiced masala is spread over soft, thick crust and adorned with cauliflower, spinach and chicken. The dish fell victim to the same dried-out chicken problem that occurs on just about every chicken pizza I've ever had, though the way the sauce soaked into the crust all but erased this misstep. It provided the same sort of pleasure you get from sopping up tikka masala with garlic naan.

The Sliced Pint's sandwich offerings are equally respectable. A meatball sandwich is a solid rendering of the Italian dish, overstuffed with seasoned pork and beef meatballs, marinara and melted cheese. The pizza grilled cheese is another one of the restaurant's successful hybrid concoctions. The triple decker sandwich featured layers of gooey cheese, bread and spicy pepperoni, adding a bit of heat to this comfort food classic. It's not the sort of food that sets the culinary universe on fire, but it's filled with enough simple pleasure to make it worth your time.

And that may be the best way to think about the Sliced Pint: as a decent, straightforward option that's more concerned with being a place for conversation than with trying to push it forward. Unless we're talking about toasted ravioli pizza. Then the place is surprisingly groundbreaking. 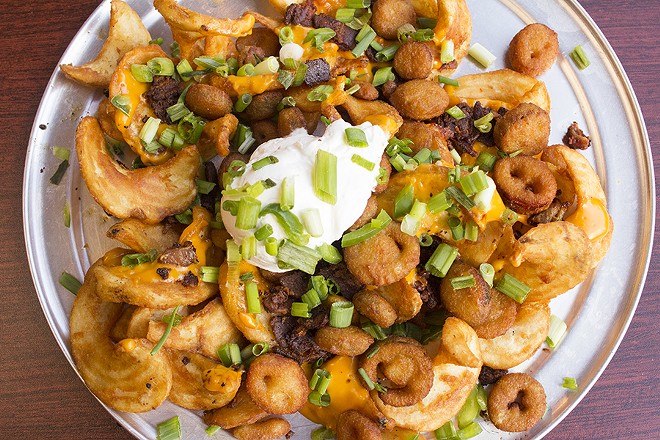 Turn the page for more photos of the Sliced Pint.