PHOTO BY MABEL SUEN The menu at the Preston is entirely small plates, including this New York strip steak.

Eau Bistro, the Preston's predecessor in the venerable Chase Park Plaza hotel, was the epitome of style. With a bright palette of red and yellow, paisley banquettes and a contemporary American menu, there was no better place in town to feel like a sophisticated jetsetter and throw back a mango-tini.

There's no question that a rebrand of the Chase's flagship restaurant was long overdue. Just consider the St. Louis dining scene at the turn of the millennium. Harvest, Cardwell's and, in the Central West End, Balaban's and Duff's were high points of contemporary cuisine. Sidney Street Cafe, still in its days before Kevin Nashan's takeover, was following the "meat-starch-veg" routine. Niche was yet to be even a glimmer in Gerard Craft's eye, and any server handing a guest a kitchen towel to use as a napkin would draw a harsh reprimand from the general manager.

My, how times changed, and yet Eau Bistro remained the same. Sure, there were menu updates here and chef changes there. And to be fair, executive chef Kyle Lipetzky, who took over the culinary operations in 2012, even made substantial menu updates that kept the restaurant's food offerings au courant. Still, the outdated image remained — what should have been the crown jewel of a grand hotel had overstayed its reservation.

That is, until last November, when Eau Bistro quietly shut its doors and underwent a complete overhaul. The result of the rebrand is the Preston, a handsome small plates and craft cocktail destination whose aesthetic flows seamlessly into the vintage feel of the Chase — more bow tie and bourbon than the white linen trousers and pinot grigio of the former concept.

The restaurant, named after the architect who designed the Chase, Preston J. Bradshaw, looks like a Restoration Hardware showroom. The bold colors of the past have been replaced with muted taupes. Rustic hardwood floors, mismatched framed artwork and antiques, and plaid semi-circle booths decorate the space. The bar, naturally, has been given an Art Deco-inspired green-and-white tiled floor and marble top to go with the black-vested bartenders.

It's stunningly of-the-moment — so much so that if we look back at the Preston ten years from now, the way we now look at Eau Bistro, we may see it as a time capsule of what it meant to dine in 2016 in all of its craft cocktail, shareable plates and gingham glory.

But in giving the place a much-needed update, has the Chase over-corrected? On a night when I sat in the bar, the concept felt refreshing and entirely appropriate. Sitting in the middle of the large, elegant dining room, however, I couldn't shake the feeling that something was amiss.

It wasn't the food, service or décor — all, for the most part, were successful. It was more that the restaurant, with its cavernous dining room, private dining space and massive open kitchen, seemed too grand a space for a strictly small plates operation. I wouldn't have batted an eye if this were the reinvention of the old Café Eau across the hall. Here, however, I wanted my server to take my order for an entrée.

My hesitation, I think, is that the retooled cuisine is as elegant as the venue, which befits a more formal, coursed treatment. This is not the small plates fare you'd get at a tapas bar; the dishes offered here are more like miniature versions of entrées, such as braised pork belly and a smaller cut of a New York strip. They've been carefully positioned to have a lower price point, but are they really meant for sharing?

I'll give him this: They're certainly well-executed. The pork belly is all-American on the surface, with succulent pork and crispy roasted Brussels sprouts, but it gets an Asian inflection from crushed peanuts and hints of ginger and soy in the caramel-sweet braising liquid. The peanuts and crunchy cabbage leaves give texture to an otherwise melt-in-the-mouth selection.

A salad of cubed golden beets, creamy goat cheese and arugula gets a subtly sweet pop from the excellent Champagne vanilla vinaigrette. Though the menu indicated a pine nut garnish, the salad on my visit was topped with sunflower seeds. It was adequate for crunch, but I would have preferred the aromatic taste of pine nuts as a pairing with the dressing.

The Preston's red wine-braised short ribs are exactly what you are looking for when you order such a dish: fork-tender, swimming in rich gravy and sprinkled with gremolata to brighten the plate. The only misstep was the butternut squash puree; served room temperature, it had the off-putting effect of suggesting the plate had been sitting for a while before being finished with the main components. It detracted from an otherwise delicious dish.

Peppery lamb t-bones paired with goat cheese spaetzle and mushrooms were cooked to a juicy medium-rare, with such a wonderful mild flavor that I couldn't resist chewing every last piece off the bones. Of the three red meat dishes, though, the New York strip was the standout. Black pepper- and char-crusted, the succulent slice of locally sourced meat seemed more like the final course in a tasting menu than simply a selection from a small plates menu. The beef dripped with foie gras butter that seeped into a side of a buttery, chive-flecked potato puree like an elegant gravy. A few pearl onions and a swoosh of a red wine demi reduction deepened the overall flavor.

The only dish that did not succeed as a whole was the smoked duck confit and spring onion croquettes. The croquettes — basically high-end hush puppies — were fine enough on their own, but the accompanying kimchi puree overwhelmed the dish with an odd, unappetizing flavor. I would have expected kimchi to be bright and spicy. This dull melange simply did not taste like kimchi — and masked anything else going on with the dish.

The charred octopus, however, more than made up for the croquettes. In fact, this spectacular offering could even make up for, say, a server angrily throwing a plate of hot soup in my face. The firm, yet tender, meat was kissed with robust char and placed atop a puree of sunchokes that tasted both nutty and floral. Pillow-soft brown-butter gnocchi would have been a fantastic dish on their own; here, they picked up the delightful bitterness of the char with the smoke from a paprika vinaigrette. The result was a glorious symphony of flavor that shows how the Preston can make a name for itself as a dining destination.

Pastry chef David Laufer's confections are less dessert than edible artwork. At times, they get overly conceptual — something you'd appreciate at a culinary competition more than after a night of savory indulgence. The "Tropical Delight," for instance, was a hodgepodge of pineapple sorbet, white chocolate mousse and coconut nougatine, all drizzled with mango-passion fruit cremeux. The piece de resistance, however, was a garnish of neon orange and pink spun sugar that can only be described (in polite company, at least) as having the look and mouthfeel of a fiber optic hairball. At least it photographs well.

The chocolate sphere is better. A chocolate shell melts as caramel is poured over the top, revealing a scoop of peanut gelato. Crushed peanut brittle was scattered all over the plate. The entire concoction tasted like a Butterfinger.

Last week, chef Lipetzky left the Chase for a position out of state, and his chef de cuisine Collin Smelser, who was instrumental in the relaunch, is now running the kitchen. (His new title is executive sous chef.)

But the menu remains the same, and so my final piece of advice does as well: Order the house-crafted breads. A cheddar biscuit and honey wheat loaf are excellent vehicles for the house-made jam, maple butter and tapenade, but the show-stopper is the pretzel croissant. Flaky and malty, it may have been the best thing I ate at the Preston.

That croissant will never go out of style. Like the dated décor of Eau Bistro, however, the Preston's small plates probably will. That's fine. The food is good enough to outlast the current trends. And maybe the next time the space needs an update, they'll give us bigger portions of it. 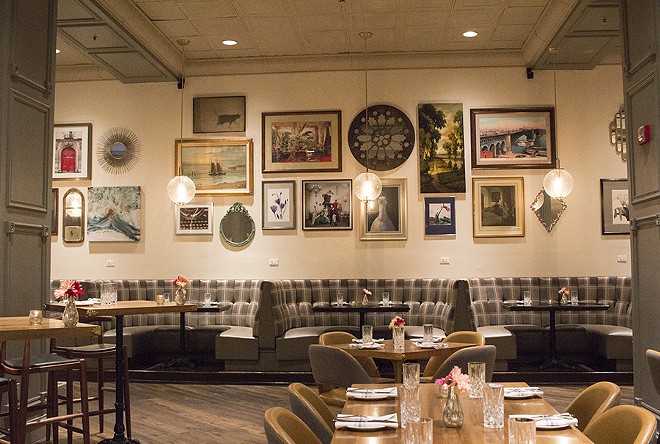 Turn the page for more photos of the Preston