Review: The Palm Trees Is a Delicious Oasis on Cherokee

Fedaa Alsadeq and Osama Almoerfi have a competition going in their kitchen at the Palm Trees. At the four-month-old restaurant, the husband and wife split executive chef duties, but it's not just a matter of sharing the workload. They each have a handful of dishes that are their particular labors of love — she doesn't touch his, and he doesn't mess with hers. At the end of service, they tally up the night's sales, and the person who has sold the most dishes gets bragging rights for being the better chef.

Usually, Almorefi explains, it's about a 50-50 split, a number that won't surprise anyone who has feasted on the traditional Saudi delicacies at this Cherokee Street gem. Since opening last December, the Palm Trees has been packed with diners curious about a style of Middle Eastern cooking underrepresented in St. Louis — the cuisine of Saudi Arabia.

It was a void that struck Alsadeq and Almoerfi when they would drive up to St. Louis from Kenton, Missouri, to do their grocery shopping. The pair lived in the small town for about a year after relocating from Iowa for Almoerfi's job as an electrical engineer. As a way of connecting with their new neighbors in Kenton, they would cook traditional Saudi food for them. People were dazzled, and not only heaped lavish praise, but also planted the idea that the pair should open a restaurant. Eventually, the words of encouragement got to the couple, and they set off for St. Louis to realize their restaurant dreams. 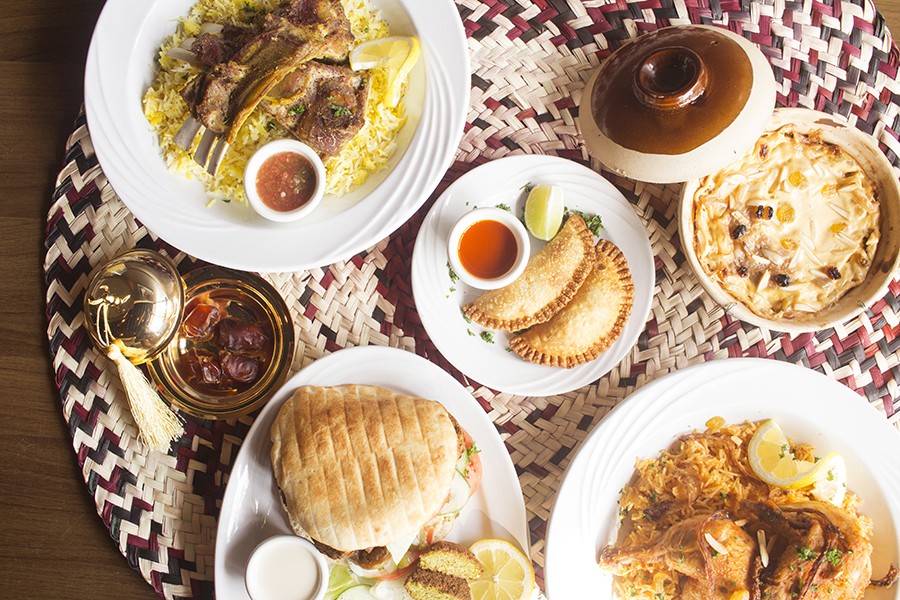 After searching the city, Alsadeq and Almoerfi settled upon the former Revel Kitchen on Cherokee Street as an ideal turnkey situation. Though the tri-level space may have been an odd fit for another concept, it works perfectly for the Palm Trees. The main level, which you enter from the street, remains a dining room outfitted with American-style tables and chairs. Aside from a coat of chocolate-colored paint and photographs and tapestries from Saudi Arabia, the space is basically unchanged from the prior occupant (which, before it was rebranded as Revel, was Athlete Eats). Shiny white subway tiles still cover half the walls, and the wooden bar remains a gathering spot for diners and service staff — though in this incarnation, cardamom-scented Arabic coffee has replaced kombucha.

Up a stairwell hiding behind a tapestry is the kitchen, sectioned off from the restaurant to give the feel that you are in someone's home and not in a restaurant. However, the truly transportive experience happens just down a few steps from the main dining room, where you may as well be stepping into another country, not just a new restaurant. The lower level has been transformed into a traditional Saudi-style dining area complete with carpet and low couches. Cubbies just to the right of the stairs invite diners to remove their shoes and take a seat for a communal-style meal, served from trays that are set on top of a sheet of clear plastic, directly on the floor.

And what a meal it is. I'm still not sure what is a more charming start to dinner at the Palm Trees: the golden tin of dates, gem-like from their sugar coating and served with an ornate pot of Arabic coffee, or the fact that Alsadeq and Almoerfi's nine-year-old son is the one serving it. He's a shockingly competent guide through the menu, describing the various dishes with aplomb. 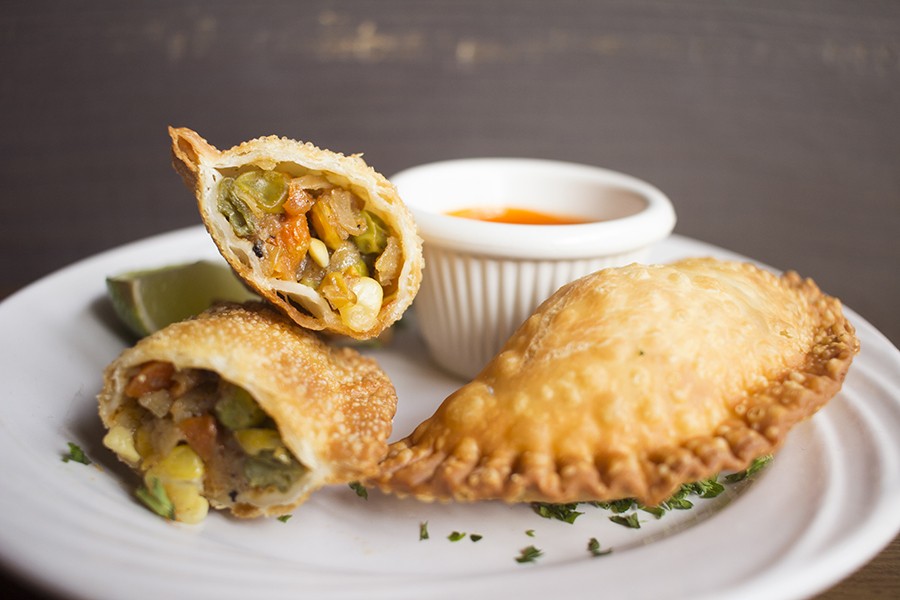 Appetizers do not stray far from the standard Middle Eastern playbook, though the Palm Trees' versions are perfectly executed. Grape leaves, plump with rice, garlic, tomato and parsley, feel like velvet in your mouth and have a pleasantly piquant flavor.

Sambusas, fragrant with spices, are like golden pillows stuffed with lentils and other vegetables. The crisp fritters release a cardamom and garlic perfume when cut open. Kebeh, another fried delicacy, is a mouthwatering disc of bulgar, onions and ground beef. Akin in texture to falafel, it's so addictive you'll find yourself reclining on the low-slung couch and popping them in your mouth, one after another, without shame.

The Palm Trees offers a few sandwich options, such as its "Falafita," a whole wheat pita pocket filled with tahini, lettuce, tomatoes and falafel. These chickpea fritters are different from what you typically find — they're both smaller and ground more finely, leaving them significantly less grainy than other versions. Additional spices also make this falafel decidedly more aromatic. 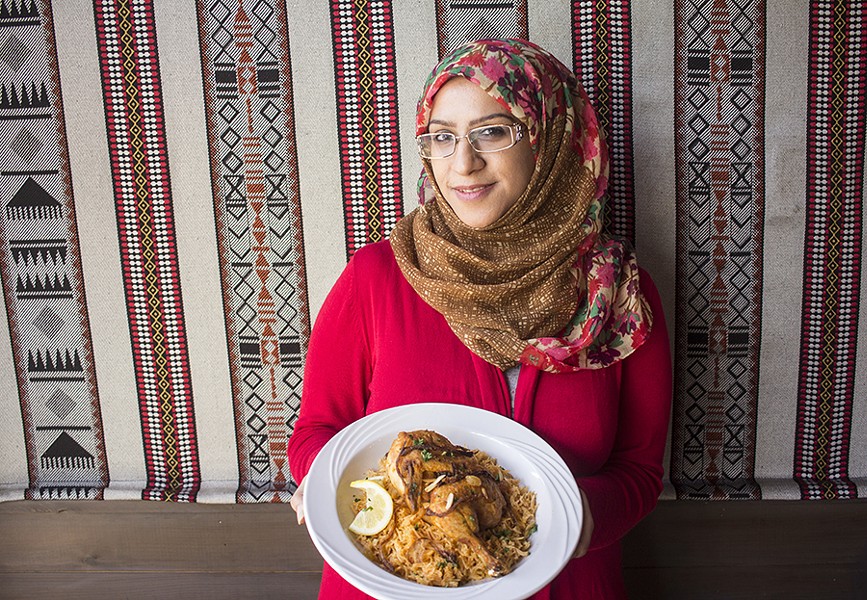 For a heartier version of the sandwich, Alsadeq adds fried eggplant, mashed potatoes and cucumbers into the mix and calls it "the Palm Trees Special Falafel Sandwich." It's tasty, if a bit messy to eat. Be prepared to use a knife, fork and several napkins.

The biggest difference between the Palm Trees' Saudi fare and the majority of St. Louis' Middle Eastern restaurants is in the entrees. Nowhere else in town that I'm aware of, for example, offers mandi, a fork-tender, three-bone lamb rib that has been braised for hours. The dish is so simple — just lamb resting atop saffron basmati rice — but you want nothing more than for the meat's delicate flavor to shine.

Like the mandi, kabsa is a lamb and rice dish, though this time the cut is a shank, and the rice is infused with spices and tomato, similar to Spanish rice. Fried onions and raisins form a wonderfully sweet and savory tobacco-flavored tapenade that encrusts the meat. The menu says this garnish is optional, but I wouldn't pass on it; it makes the dish. 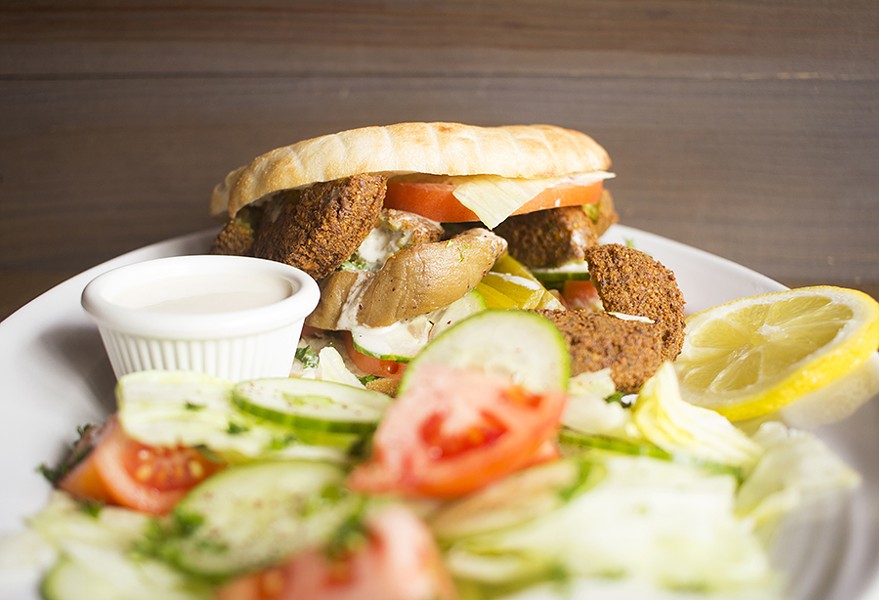 Kalbi hijazi is a simple plate of slow-cooked bone-in chicken breast and thigh (you can also opt for lamb), cooked with potatoes and orange zest and served over rice. For those who are curious about the cuisine but want a baby step as an introduction, this simple, yet well-cooked dish is the way to go.

For those who want to dive in head first, however, try the molokhia. This soup-like dish is made by simmering ground leaves of the nalta jute shrub in lamb broth. It has an interesting taste, akin to eating pulverized green tea leaves, and takes on an almost oily texture, similar to broken-down okra. Our server recommended that we pour it over the accompanying rice, though you can also eat it as a soup. I can't say I was in love with it, nor did my palate know quite how to wrap itself around this dish, though the flavors were intriguing enough that I kept going back for more.

You can get excellent baklava at the Palm Trees, but why not try the om ali instead? For this baked sweet, almost like an Arabic bread pudding, a flaky, butter-soaked crust is formed against the inside of a ceramic dish, then topped with milk, raisins, pistachios, cloves and cardamom. It's a sticky, not overly sweet, aromatic treat.

The rice pudding, however, is what our nine-year-old server recommended, and he did not lead us astray. Unlike most rice puddings I've tried, this version is so smooth it could be mistaken for flan. The pudding comes out room temperature, akin to creme brûlée, and feels like eating silk. A hint of sweetness and spices and a dash of crushed pistachios for a garnish make this an unexpected sendoff to a lovely meal.

Alsadeq and Almoerfi's son is positively charming, as is their friend's brother, who obviously has no experience in the restaurant business and stumbled endearingly through our service (after some lighthearted questioning, he revealed that his sister got sick of him sitting around the house playing video games and made him get a job). It makes for a warm, familial atmosphere, but it does not make for speedy service. Though our experience dining upstairs was fairly swift, a two-course weekend meal downstairs lasted well over two hours.

Still, you don't exactly want to rush when you're half-laying on a cushion drinking coffee and lingering over dessert. I'm not sure who gets the credit for that rice pudding, Alsadeq or Almoerfi, but it really doesn't matter. With food this good, they can duke it out all they want to in the kitchen. The real winners at the Palm Trees are those of us who get to eat there.