Review: The Garden on Grand Doesn't Live Up to Its Lofty Ambitions

PHOTO BY MABEL SUEN The Garden on Grand has a stunning interior, but the food falls short.

The Garden on Grand

When the Garden on Grand opened last September near the corner of Grand and Shenandoah, owner Cevin Lee made an observation about the relatively neglected commercial district, less than a mile north of the bustle of South Grand's main drag. "If you raise the bar, the rest should pick up the pace," he mused.

Lee knows of what he speaks. Though not a first-time restaurateur — Lee's family has owned the adjacent Americanized Chinese takeout spot, Hong Kong Express, for 25 years — his background is in real estate. The family owns a large swath of the block, and when the space at 2245 South Grand came available, Lee saw it as an opportunity to bring a health-conscious, progressive eatery to Shaw. The residential streets to the west are increasingly filled with well-heeled professionals and young families; why not give them a place to eat without leaving the neighborhood?

Unwilling to let inexperience temper his ambition, Lee pushed forward with a plan for a behemoth of a restaurant. The Garden on Grand would serve breakfast, lunch and dinner. It would have healthy grab and go options in a glass pastry case. The bar program would rival the city's craft cocktail bars, the food would be high-concept and use only the best ingredients. The setting would be stunning. 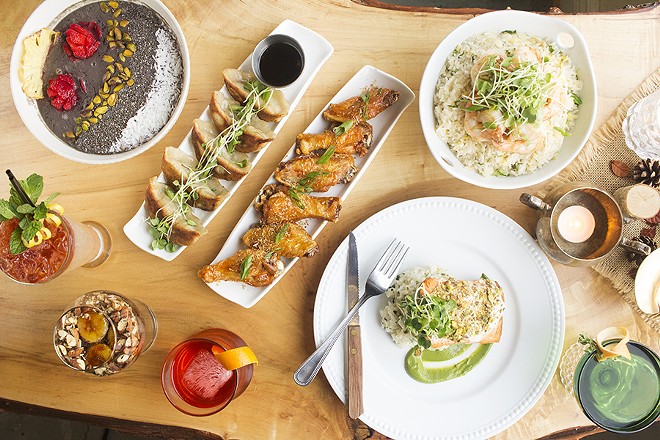 If Lee set high expectations for the Garden on Grand, his executive chef Kore Wilbert raised them several notches. Though his resume is not lengthy (Mad Tomato, MX, SSM Health), Wilbert boldly referenced world-class destinations including Momofuku, elBulli and Alinea as his inspiration. His ambitious menu touches on everything from classical French to southeast Asian, underscoring the team's determination to go big.

But while Lee and Wilbert raised the bar quite high for the Garden on Grand, the reality hasn't fully kept pace.

One area that exceeds expectations is the atmosphere. Lee spent two-and-a-half years personally executing a full-gut renovation of the space, transforming the once-spartan room into a lush oasis that looks like a modern version of a 1970s-era Polynesian restaurant. Vines grow out from the exposed brick and wood walls, and succulents abound in pendant vases and assorted pots throughout the room. The rustic tables, made from a massive tree trunk, are juxtaposed with leather chairs trimmed with elegant nail head. The bar sits under a beautiful brick archway to one side of the shotgun room, and the open kitchen that sits at the back of the restaurant gives a jolt of energy to the otherwise serene feel. 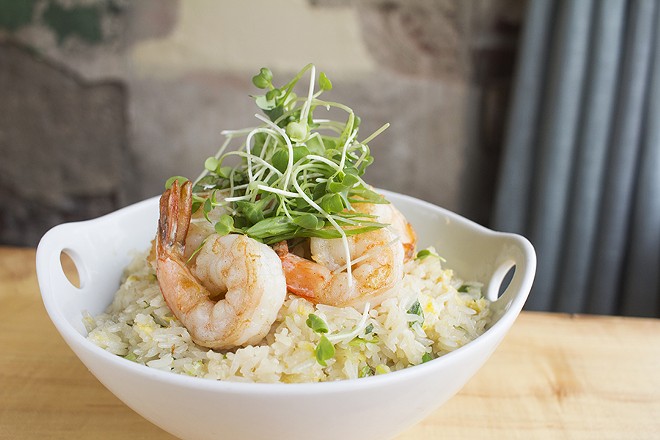 If looks alone were what mattered, The Garden on Grand would be a roaring success. However, the food — though just as ambitious as the décor — doesn't always live up to its gorgeous environs.

Among the starters, pan-seared duck dumplings are a standout, plump and overstuffed with duck confit. The wrappers are as delicate as a silken purse, and the accompanying ginger soy dipping sauce perfumes the rich meat. Ginger coconut wings are equally pleasant. Plump wings and drummies, lightly glazed with sweet chili sauce and ginger, are juicy and well-cooked. A dusting of toasted coconut adds crunch to the already crisp skin.

An off-the-menu steamed mussel appetizer was less successful. The shellfish tasted muddy, and the overly spicy, yet flat, broth only exacerbated the issue. 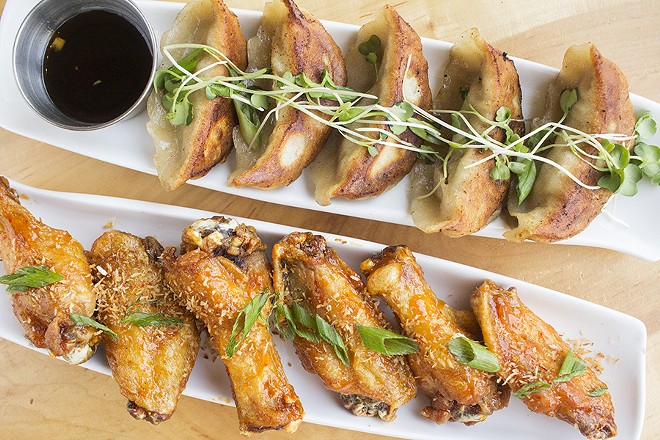 The entree specials on my visits had problems as well. Barramundi, though cooked impeccably, was served over a bland squash and rice blend. A simple adjustment in seasoning would easily correct the dish.

Sadly, the same cannot be said for the lamb terrine, which was dry and unpalatable. It was supposed to have been served with lamb jus, which might have reconstituted the meat — if only it was actually part of the dish. Our server insisted it was there on the plate, but made his case by pointing to roughly three droplets on top of the lamb. I remain unconvinced. Not that it matters; even a dousing of nectar straight from the heavens would have done little to turn around the dish.

The regular menu entrees fared better. Feta, herbs and crushed pistachios encrust a beautifully cooked salmon filet. Though a bit salty, the coating adds both richness and texture to the fish, which is paired with a simple, yet well-cooked, herbed risotto. 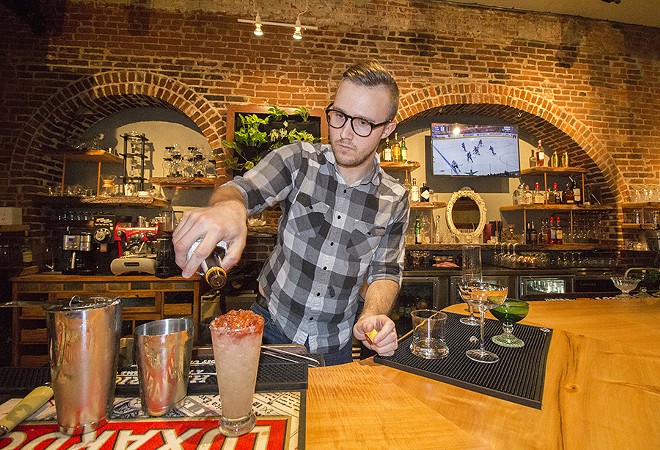 Though the quirky name may throw you for a loop, the "Ground Score" proved to be a pleasant mushroom and pesto pasta. Fragrant basil pesto, accented with orange zest, clings to housemade pappardelle noodles and assorted wild mushrooms. Miniature pickled peppers shaped like teardrops give a piquant pop.

Wilbert pulls out every stop on the filet. The local grass-fed meat is prepared sous vide, then finished on a cast-iron skillet, giving it a robust crust. It sits atop a lemon-and-garlic tomato concasse, which gets mostly lost as the steak is also paired with a sweet demi glace. It has a lot going on, but overall, the flavor is quite good. The only lackluster component is the cheddar potatoes, advertised as "super creamy" but in reality more like "gluey."

The "every technique under the sun" approach Wilbert takes with the filet is on display with most of the entrées. It could be a problem with menu writing (you don't need to list off every damn thing that goes into a sauce in your descriptions), but it comes across more like an overzealousness to demonstrate proficiency in technique. As I read the menu, the sage advice of Coco Chanel kept coming into my head. "Before you leave the house, look in the mirror and take one thing off." That wisdom doesn't just apply to accessories.

The meal's biggest problem, however, wasn't the food, but the timing. Let me be clear: Every last person at the Garden on Grand was incredibly kind and hospitable. From the bussers to the waiters to the bartenders, we were treated as if we were guests in someone's home. This didn't erase the fact that it took roughly 45 minutes from the time our appetizer plates were cleared to receive our entrees. On a subsequent visit, our first and main courses came out at the same time. Mistakes like that can happen, but considering that the restaurant was not busy on either occasion, they seem avoidable.

One of the employees, a seasoned industry professional, seemed aware of the issues. He admitted that the restaurant is in the process of dialing back some of its ambitions and may be tweaking its concept in the coming months.

I wonder, though, if this is merely a matter of some minor adjustments, or whether the Garden on Grand needs to rethink what kind of restaurant it wants to be. If it's what I suspect — that Lee wants to be a gathering spot for the residents of Shaw and Compton Heights — the price point is going to need to come down. I understand he and Wilbert are using quality ingredients, and there's a cost associated with that, but $170 for dinner for two (with three alcoholic beverages, but not including tip) is special occasion pricing at a place that can't bank on being a special occasion spot. 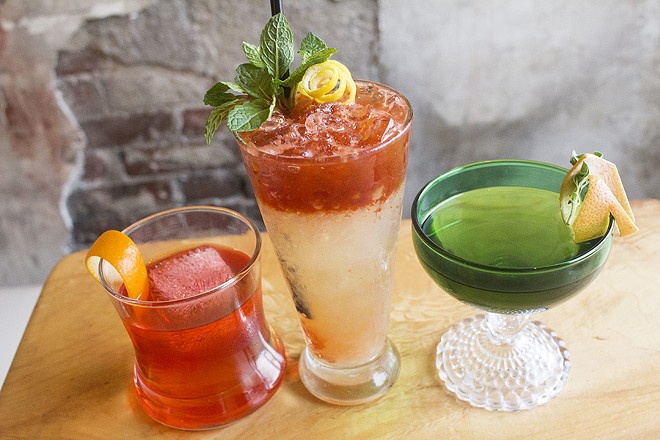 On my way out one night, I ran into Lee who, assuming I was a regular customer, seemed to echo these concerns as he bid us farewell. He told us that the restaurant is a work in progress and that they were giving it their best.

I don't doubt he is speaking the truth — that they are doing the best that they can. And most of the time, that results in a worthwhile meal. At other times, though, they seem to get bogged down trying to live up to all they had hoped to achieve. I commend them for dreaming big, even if that means they don't always hit the impossibly high mark they've set. 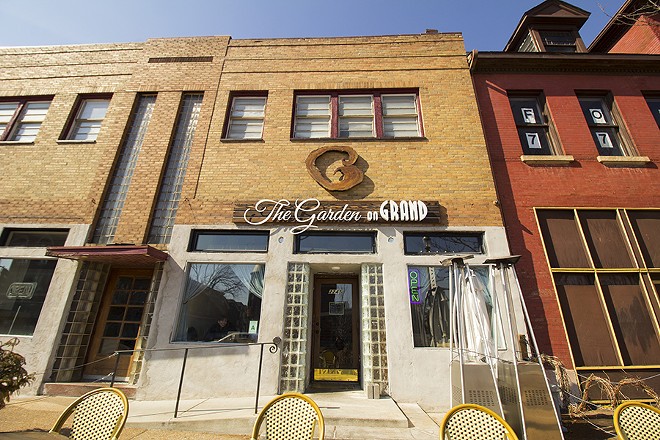