Review: The Blue Duck Lays a Goose Egg in Maplewood

PHOTO BY MABEL SUEN The "Don Hamm" is a bright spot in an otherwise unimpressive menu.

I had the best ham sandwich of my life at the Blue Duck, the three-month-old Maplewood outpost of the beloved Washington, Missouri, comfort food spot. House-cured ham, grilled so that the edges develop just a touch of caramelization, has the sweet pork flavor of a country ham steak. It's sliced and stacked atop a butter-griddled potato bun, accented with a date-walnut spread and crumbled blue cheese that mingle to form a delectable tapenade the consistency of an old-fashioned cocktail party cheeseball. A drizzle of sorghum molasses plays off the ham's sweetness and offers a syrupy contrast to the funky blue cheese, while arugula and a single, thick-sliced onion ring serve as garnishes.

This miracle on a bun, known as the "Don Hamm," is just one of the Blue Duck's down-home lunchtime successes. In fact, one of my dining companions was so impressed with her quiche and a taste of my sandwich that she went back the next day with her husband. Lunch, she reported, was again delicious.

This pleasurable, home-style food was exactly what I expected from a restaurant that got its start seven years ago in a quaint Missouri river town. Burgers, quiche, salads, mac and cheese — all are examples of the sort of simple, well-executed meal you'd enjoy with Mom after a day spent antiquing on Main Street. This is how owners Chris and Karmen Rayburn built a large enough following to warrant expansion, and it is where the Blue Duck excels. 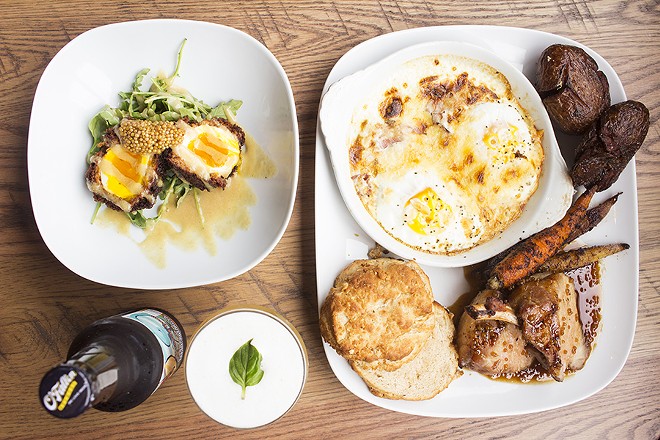 But something seems to have happened on the restaurant's migration east on I-44, and it wasn't for the better. In an apparent attempt to gussy-up the food for more sophisticated tastes, the Blue Duck set its sights a bit higher. Fusion, New American, contemporary riffs on comfort fare — this is the type of food you'd expect to see on the menu of a hip Maplewood eatery. And this is where the Blue Duck stumbles.

This tale of two ducks begins roughly seven years ago, not long after the Rayburns bought Washington's Gourmet Café and renamed it the Blue Duck. Though they moved the restaurant to its current digs on the city's riverfront, the husband and wife team had an even bigger move in mind: They wanted to expand to St. Louis. After searching for the right location, they came across a subdivided space in the building that used to house Monarch and knew they'd found their spot.

On this last point alone, you have to commend the Rayburns for their bravery. Since Monarch closed five years ago, the building that held one of the crown jewels of St. Louis dining has sat vacant — mostly because it was massive and expensive, but in part (at least in my humble opinion) because no one wanted to occupy such hallowed ground. Comparisons to Monarch, though unfair, are inevitable, and it took a brazen soul — or, in this case, two of them — to accept such a challenge. 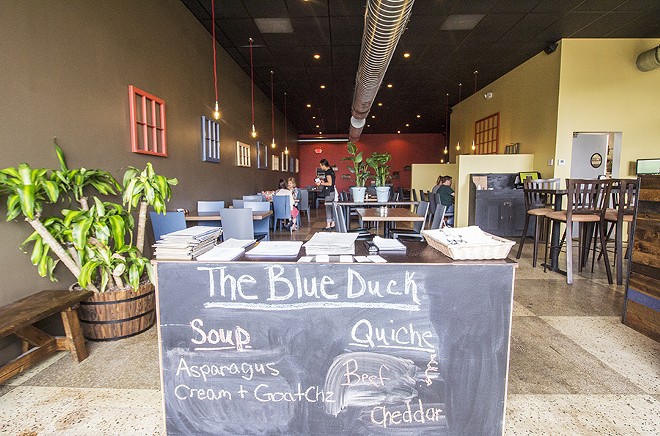 Though the Rayburns in no way are trying to be Monarch 2.0, they pay homage to the building's storied history by hanging Monarch's old-fashioned revolving coat-check rack above the bar. It's the most prominent fixture in an otherwise bland dining space. Exposed ductwork, a dark drop ceiling, a deep, shotgun space that's windowless save for the very front and icy blue-colored paint on drywall give off the feel of a finished basement. They've tried to soften it up with assorted window pane wall hangings, wooden tables and a bright red accent wall, but the room feels both cool and overlarge, even when filled with guests. To the Rayburns' credit, I overheard an interior designer consulting on the space during one of my visits, indicating that a revamp may be in the works.

A more pressing issue for the Blue Duck, however, is a menu revamp — or at least one capable of revamping part of it. As previously noted, lunchtime offerings are where the restaurant puts its best webbed-foot forward. In addition to the "Don Hamm," the restaurant's signature sandwich, the "DLT," pairs succulent sliced duck breast with tomato, lettuce and chipotle mayonnaise to offer a touch of heat. A gooey fried egg oozes over the components, and toasted sourdough bread soaks in the yolk, sauce and rendered duck fat. It's a magnificent take on a BLT.

Quiche — on my visit filled with spinach and tomatoes — is so fluffy it occupies a perfect, custard-like state. Unlike a more traditional pie shell, the crust on my visit was soft and flaky like brioche, and pouffed away from the egg mixture as if it had been baked en croute. 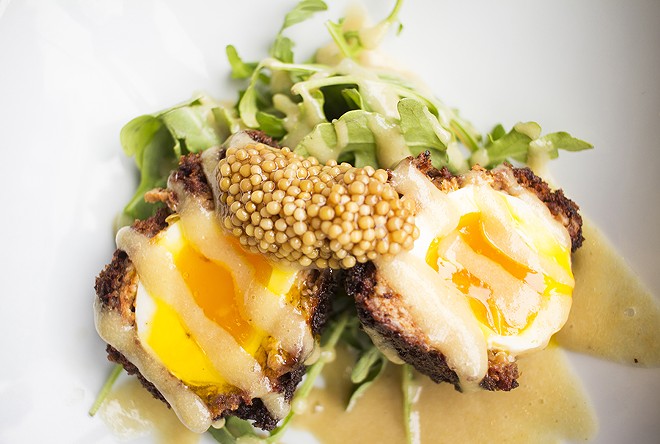 The restaurant offers the same menu throughout the day, so there are no "lunch" or "dinner" offerings per se. However, the more formal appetizers and entrees you'd be inclined to order for an evening meal were less successful. Of the starters, the Scotch egg was the standout. The egg was cooked so that the yolk remained liquid, and its coating of breadcrumb and sausage was soft, with a pleasant crispy texture. Pickled mustard seed vinaigrette and arugula offered a refreshing counter to the richness. It's one of the better examples of the form I've tasted.

On-trend braised pork belly steam buns were passable, but not memorable. The pork belly was stringy, and the kimchi lacked spice. Likewise, fried pork belly bites were mediocre. Coated in a bland spice rub, the cubes of meat had the taste and texture of stale bacon. I found myself soaking them in the accompanying molasses barbecue sauce.

The "Smoked Fried Hot Chicken" piqued my interest because of a most unique and whimsical feature: Red Hot Riplets breading. The Old Vienna potato chips are beloved in St. Louis for their addictively piquant seasoning. As such, I anticipated the chicken would pick up on such a pronounced spice blend, but it was overpowered by the smoke. The flavor was flat, and in an attempt to give it some oomph I tried dipping the chicken into the accompanying pickled pepper gravy. This was a mistake; the bland goo makes wallpaper paste seem appetizing. 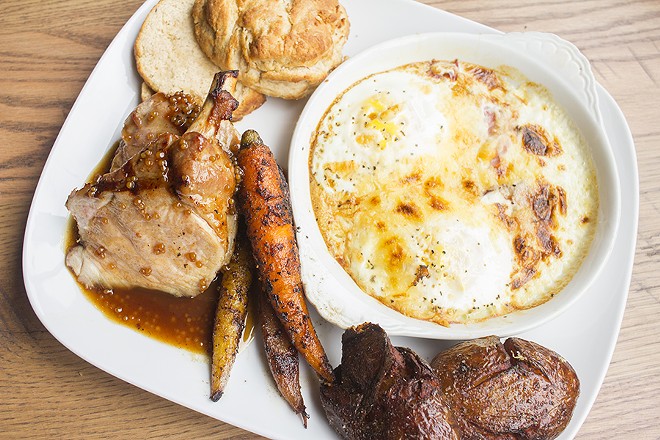 I was worried when the server did not ask our temperature preference for the lamb chops, and the well-done meat that arrived confirmed my suspicions. A mushroom and red wine puree may have reconstituted the meat, but it was so overtaken by a salty olive puree that no other flavors could shine through. A fava bean and barley mélange was the best part of the dish.

The grilled pork chop, though also overcooked, was at least brined and flavorful. However, the overall presentation suggested an awkward attempt to hip-up country cooking. On the plate next to the chop, a crock of shirred eggs and bacon tasted fine, but made for a strange side dish. Was I supposed to eat them separately? With the chop? It was confusing, but less confusing than the tar-black carrots also served as an accompaniment. The menu said they are "glazed," though with what I have no idea. They didn't taste burnt. In fact, they didn't taste much like anything but carrot, which only made their appearance odder. Those smoke-bomb fried whole potatoes also made an appearance, as did a dried-out biscuit.

I was hoping that an apple crumb cake would finish things on a high note, but the crumble was so smoked (yes, they smoke this too) that it overtook what would otherwise have been a decent enough dessert. Bourbon caramel cream cheese and softened apples tried to show off their flavors, but they couldn't break through.

In some ways, I wonder if that's not a commentary on many of the restaurant's problems. There are a few nuggets of solid cooking that want to shine through at the Blue Duck, but they're masked by a need to try too hard.

Except for that ham sandwich. Its greatness can shine through just about anything.