PHOTO BY MABEL SUEN The lamb biryani at Sheesh Restaurant

If the sunlight from the windows facing South Grand catches one of the tables at Sheesh Restaurant just right, you are likely to be blinded. Fashioned from ornate copper from base to top, the round, low-profile stunners are the first thing you notice when you walk into this four-month-old Turkish spot.

Then you notice the chairs, squat, angular and decked with red and black Turkish fabrics. The same fabric hangs from the walls, as do some colorful, Turkish-inspired paintings and an abstract black and white print of the Bosphorus. And the copper is not limited to the tables. Décor, platters, pitchers, serving dishes — even the flatware, cups and plates given to every diner are made from the stuff. If King Midas' powers worked in copper rather than gold, you'd swear he'd touched just about every corner of this showpiece of a restaurant.

With enough of the metal to overwhelm a large-scale smelting operation, you might assume that owner Safa Marmarchi has his roots in the copper business. That assessment isn't all that far off. Before moving to St. Louis, the first-time restaurateur owned what he says was the largest marble company in Iraq. In the violence that followed the fall of Saddam Hussein, Marmarchi and his family fled to Afyon, Turkey, where they continued to operate the company. 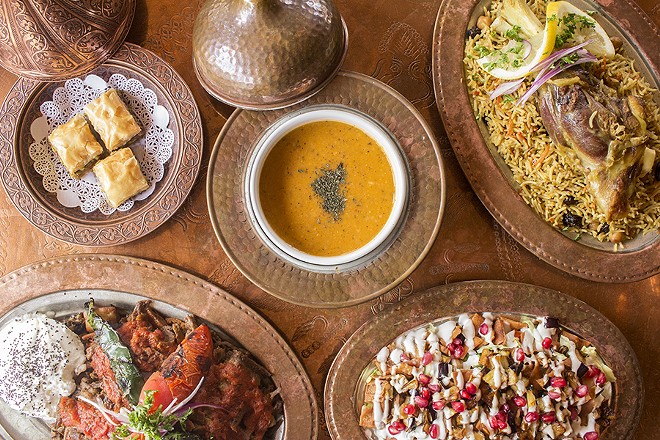 As part of the United Nations' refugee program, Marmarchi and his family were relocated to St. Louis in 2007. He continued to travel to Turkey on a monthly basis to manage operations, but his biggest customers were in Bagdhad and Benghazi — needless to say, business went south, and Marmarchi needed to find another way to earn a living. He enrolled in a Turkish cooking course and set out to rectify what he saw as a gaping hole in the St. Louis dining scene.

Marmarchi opened Sheesh Restaurant last December in the storefront on the corner of South Grand and Humphrey that formerly housed New St. Louis Wok. The changes to the place are stunning, not just in aesthetics but also in the caliber of food. Gone are the Americanized fried rice and sweet and sour chicken, replaced with a menu of authentic Turkish food, interspersed with a handful of Middle Eastern dishes that show up throughout the eastern Mediterranean. 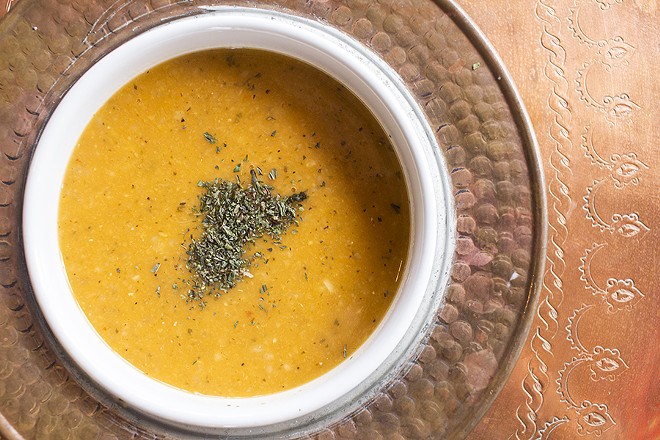 Meals begin with a complimentary bowl of ezogelin soup, a tomato soup laden with lentil, rice and bulgur that features a deceptive amount of heat on the back palate. The soup arrives with a flourish, in an ornate (you guessed it) copper serving bowl capped with a lid that has a small crescent moon as its handle. It's a gorgeous piece of serving ware, but you'll probably forget about utensils as soon as you taste this delectable spiced soup.

Hummus and baba ganoush stand as idealized examples of their forms. The former is shockingly creamy and spiked with a dusting of paprika. The latter is rich and smoky, laden with tahini and garlic. Both portions (which were admittedly a bit small) were gobbled up almost immediately.

Lebne, the thick, Lebanese-style yogurt dip, is as decadent as heavy cream whipped with cream cheese. Dipping into it with the fluffy, house-fired pita bread was one of the meal's most pleasurable moments.

Likewise, the tabouleh salad is an understated show-stopper. Sheesh's version of this quintessential Middle Eastern salad of bulgur, tomato, cucumber, onion and parsley is generously dressed with olive oil and lemon juice — it's tart enough to make your mouth water.

As such, I had high hopes for the "Sheesh Special" salad, described as a fried eggplant alongside chickpeas, tomatoes and fried bread. Instead, we were presented with a platter that mostly consisted of iceberg lettuce. The squares of bite-sized pita were enjoyable, but there was so little eggplant its presence was barely detectable. Compared to the tabouleh, this dish was forgettable.

Sheesh's entrée menu features many iterations of ground lamb kebab, including an especially tasty pistachio version. Ground lamb meat is mixed with crushed nuts, garlic and herbs, then grilled. The exterior is crisped and imbued with pleasantly bitter char from the grill; the interior is juicy and tender. The kebab lays on a bed of parsley that has been lightly dressed in lemon and olive oil — anything more would take away from the kebab's nuanced flavor.

The "Alinazik" is a straightforward variation of the ground lamb kebab, this time minus the pistachios. In place of the parsley, this version sits atop baba ganoush and is served with a side of yogurt sauce. The smokiness of the eggplant pairs well with the simply charred lamb, and the yogurt cuts through the richness with razor-sharp tang. Flavor-wise, it's not all that different from the "Sheesh" kebab; this well-executed dish has a similar, Middle Eastern-spiced profile, though the meat is cut into cubes rather than ground and served over rice. It earns its place as the restaurant's namesake dish.

A lamb shank, simply seasoned in warm spices and braised until the meat falls off the bone, is the ideal match for biryani rice. Raisins, chickpeas and fragrant spices marry the meat, creating an aromatic experience. The chicken version of the biryani dish is no less excellent. Though the white meat was not as juicy as the lamb, it had a rich, curry glaze that made up for it.

We ordered the chicken and beef doner as plates, though they would be better as sandwiches. For both, the meat is lightly spiced, cooked on a rotisserie and sliced off into small hunks. This works well for the chicken, but the beef was slightly chewy — it would have been much better stuffed into a pita and smothered in tahini and garlic sauce. Doners are the Turkish version of fast food, really, and I realized belatedly that the gussied-up platters were no improvement on the grab-and-go version.

The standout entrée is the iskender kebab, a heaping platter of thinly sliced, marinated lamb mixed with melted butter. A rustic charred tomato sauce, enlivened with fragrant spices, covers the lamb; on the other side of the plate a baseball-sized mound of thickened yogurt is there to counter the lamb's full flavor. The mix of flavors is not the only highlight — the cool yogurt mingles with the warm meat and sauce, giving the dish interesting contrast.

Desserts at Sheesh are no less impressive. The restaurant's Baklava is one of the better versions around: light, flaky and heady with the flavor of cherry. Knafeh, a Turkish version of a cheesecake, takes fifteen minutes to prepare but is well worth the wait. The syrup-soaked cheese pie, the texture of flan, is coated in shredded phyllo for crunch.

I was most surprised, though, by the sutlac, or Turkish rice pudding. This dish is shockingly decadent and has more in common with vanilla crème brulee than the mushy, ill-textured stuff that so often gets peddled. I'm still speechless that rice pudding can have such a transcendent effect.

There's much to love about Sheesh — the rice pudding and tabouleh alone make this place a gem. It's not the cheapest spot on town, a fact Marmarchi defends with vigor when pressed. "Do you see these plates?" he asks, pointing to the standard entrée dish. "It is imported directly from Turkey and costs $140 dollars."

Would anything less befit such delectable food?