Review: Shawarma King Brings the Best of the Middle East to the Loop

When he was just three years old, Mohammed Alsalem was sent to Jordan by his father. He doesn't like to talk much about it — partly because of the feelings it conjures, but mostly because he really doesn't understand his father's reasons. "He said he wanted me to learn about my country," is all Alsalem knows. "But I was born here, right down the street at St. Mary's Hospital."

Born in Richmond Heights to an American mother and Jordanian father who split up before his second birthday, Alsalem considers St. Louis home, even though he spent the better part of his youth in the Middle East. After leaving the U.S. for Jordan, he lived with extended family who did their best to instill in him the culture of his paternal homeland. He went to school, worked odd jobs and lived his life — but as soon as he turned eighteen, he was on a plane back to St. Louis. "Why would I come back?" he asks. "Why wouldn't I? This is my country."

However eager he was to return to the States, one thing stuck with Alsalem from his time in Jordan: the cuisine. As a youth, Alsalem had a passion for cooking, and he'd taught himself how to make the Middle Eastern delicacies he saw at home and on the street. It wasn't a career move — the jobs he worked in Jordan were outside the food business. He pursued cooking simply for the love of it and for something to do.

Those skills served him well when he returned to St. Louis seventeen years ago. In need of a job, Alsalem worked at several Middle Eastern restaurants around town before opening Petra in downtown Kirkwood. When that spot closed after only a year, Alsalem's friends and family hoped he would leave the insecurity and long hours of the restaurant business behind him. However, he could not shake the feeling that another concept swirling around in his head, a hole-in-the-wall shawarma spot, would be a success.

Armed with his signature beef and chicken shawarma recipes and a commitment to serving only freshly prepared foods, Alsalem opened Shawarma King this past December. The restaurant sits in the small storefront just off Melville that was the original home of Seoul Taco and, more recently, held Zippy Burger. The space is small, with room for only six yellow painted tables and a small ordering counter. The yellow and dark blue walls are sparsely adorned, creating the feel of a casual takeout spot. 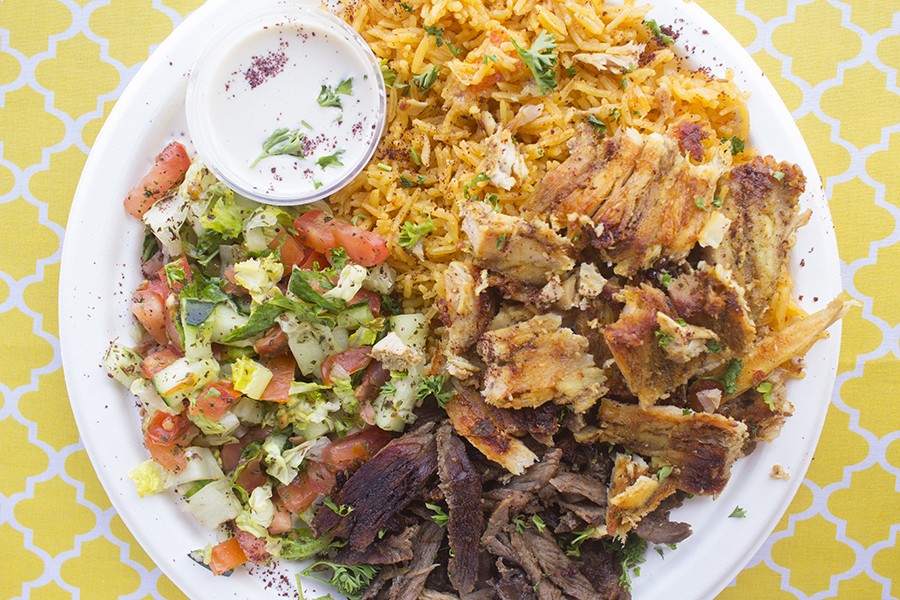 Alsalem is quick to point out the open kitchen that allows his two spits of shawarma — one beef and one chicken — to be visible the moment you walk through the front door. Alsalem is proud of how he makes the dish: Every day, he spices the meat and stacks it on the spit by hand, a technique he says is lost on many of the Middle Eastern restaurateurs around town who buy their shawarma meat already prepared.

The added effort results in perfectly seasoned, succulent meat, earning Alsalem's shawarma a spot at the head of the town's pack of Middle Eastern restaurants. Chicken, shaved off to order and scented with garlic and lemon, is placed on the plate in thick, succulent hunks over rice. This is no plain basmati, however: The bright orange rice is generously spiced with turmeric, cumin and various Middle Eastern spices akin to Indian masala. It has a slight kick to it, which amps up the mild flavors of the chicken. A little drizzle of tahini cools the heat.

As excellent as Alsalem's chicken shawarma is, I found myself positively enamored by the beef version. It's easy to see why Alsalem wants to show off this beautiful hunk of meat. The fat cap that crowns the spit glistens and renders down, infusing the beef with rich flavor. When sliced, the exterior pieces come off in little caramelized bits, leaving an interior as juicy as a well-cooked steak. Like the chicken, it's served with a side of tahini, though the meat is flavorful enough to stand on its own.

Platters come with rice and a tomato cucumber salad, but the meat can also be prepared "Arabi" style, meaning wrapped in pita and pressed. The result is a crisp sandwich that's the Middle Eastern version of a panini, served with a side of battered fries that beg to be drowned in the pungent, house-made garlic purée.

Shawarma may be king at this restaurant, but it's not the only reason for a visit. Alsalem makes everything from scratch, and his efforts show on dishes like the falafel, its crisp fried exterior yielding to a soft chickpea mixture on the inside.

You may think you've had your falafel fill after enjoying such a fine specimen, but then you'd be missing out on the "Falafel Mahshi." In addition to the usual seasoned chickpea mix, the "Mahshi" version is studded with onions, sesame seeds and sumac that turn the croquette into a punchier masterpiece of the form.

Even the side dishes are created with great care at Shawarma King. The hummus is silken, drenched in olive oil and topped with a green pepperoncini tapenade that infuses it with spice. Baba gannoujh is creamy and liberally flavored with tahini, giving it a deep earthy flavor. It, too, is capped with the spiced tapenade, though Alsalem is happy to leave it off if you'd prefer to experience the joyful simplicity of the eggplant and tahini taste.

Stuffed grape leaves, here called "Warak Inab," are a refreshing finger food, wrapped around rice, tomatoes, garlic, parsley and drizzled with a lemony sauce. Creamy cucumber yogurt dip is bright, studded with hunks of cucumbers and flecked with fresh mint and the tahini salad — basically a Middle Eastern slaw made with diced tomatoes and cucumbers. It serves as a refreshing garnish for the various forms of shawarma.

Alsalem knows that he could cut corners and still be successful — buy pre-made hummus, serve frozen shawarma meat — but he thinks this is short-sighted. "This has been missing in St. Louis," he explains. "I don't mean shawarma. You can get that here, but this sort of real, quality shawarma like they serve in the Middle East, you can't find that anywhere here in town."

Alsalem would know — even if he had to leave behind his family and travel halfway around the world to find out.