Review: Scarlett's Wine Bar Has That Sasha's Magic, Even If the Food Falls Short

A confession: I'm actually writing this review of Scarlett's Wine Bar at its sister establishment, Sasha's on DeMun, chatting it up with the bartender. It's where I write nearly every week, at my favorite table right next to the secret surge protector, over a glass of wine that I don't even have to order. Usually Kit, a veteran server I've grown to consider a friend, simply asks for my mood. Sometimes she doesn't even do that. "Just drink this," she recently told me as she handed over a glass of Italian red. "It's what you've been looking for." It's currently my favorite wine.

I mention this not only to disclose my bias, but to illustrate why people go to the Sasha's on DeMun, as well as its counterpart on Shaw. Sure, I'm a regular, but judging from the packed room of familiar faces on any given Tuesday, I'm not the only one drawn to the extensive list of glass pours and the low-key vibe. Maybe I'll order a prosciutto plate here or a cheese board there, but I couldn't care less about the food. As long as what they are serving is passable, I'm good.

At Scarlett's, Alan Richman and Rachel Jones are trying to change this — the part about the food, that is. The Sasha's owners opened their latest concept on the eastern edge of the Central West End this past June not only as a wine bar, but a bona fide restaurant — a place to go for dinner and not merely after-dinner drinks or an aperitivo. They put in a larger kitchen, special-ordered a pizza oven from California and crafted a more extensive menu than they serve at their other properties.

The neighborhood has responded — to the point that the wine bar component seems to be lost on patrons. The place is busy earlier in the evening, but things drop off after regular dinner hours, with the Central West End's late-night revelers stubbornly sticking to the familiar street parade on Euclid. Like its sisters, Scarlett's stays open late to accommodate a drinks-only crowd, but that business hasn't really popped.

Traffic flow aside, though, if you weren't watching the plates coming out of the kitchen, you might think Richman and Jones had simply opened Sasha's part three. Scarlett's boasts that sexy, candle-lit, wine crate décor that's come to define their aesthetic, with a large, marble-topped, shotgun-style bar, marble bistro tables and garnet-colored walls. Framed vintage liquor posters decorate the space and gorgeous, mismatched chandeliers hang from the gilded tile ceiling. When it's nice outside, the front patio that faces Laclede provides a breezy setting for throwing back a glass of Sancerre.

The kitchen sits in the back of the restaurant, which ends up being quite telling — as much as Richman and Jones have positioned Scarlett's as a dinner destination, the wine is still the draw. Smoked trout arrives with just a delicate hint of sweet wood smoke. Capers, diced onions and tart crème fraiche, inspired by the classic smoked salmon preparation, provide a tart bite that brightens the dish.

The day's appetizer special, a panzanella salad, was equally adequate. Crunchy bread cubes, cucumbers, tomatoes, red onions and fresh mozzarella were tossed in a pleasant, mouth-puckering vinaigrette — unfortunately there was too much of it. The kale Caesar salad suffered the same over-dressed fate. As much as I appreciated the fearless, anchovy-forward dressing, it needed less.

Having tasted some earth-shattering briskets in my time, I'm admittedly ruined. This was no excuse for Scarlett's brisket sandwich, though. The dry, stringy meat had no flavor until it was reconstituted in a salt-bomb of a jus. Presumably it was a riff on a French dip, but it was a sub-par one.

The grilled cheese turned out to be the much better sandwich. Herbed cheddar cheese and tomatoes melted over butter-sliced bread, evoking the classic grilled cheese and tomato soup, albeit in a grown-up way. The accompanying house-made tater tots stole the show, however. More like deep-fried mashed potatoes, these crispy-breaded poufs are exactly what I'll want after a few glasses of wine.

If you don't mind lump crab cakes that are more cake than crab, Scarlett's version is fair enough, with fresh-tasting crab. I longed for larger hunks and more of it, though at $14.40 for an order of two, I can't complain too loudly.

I must, however, lament the salty beef tenderloin. The beef was well-cooked, encrusted with coarsely ground black peppercorns and smothered in exotic mushrooms — all good things, had they not been overshadowed by heavy-handed seasoning.

Richman and Jones have gone out of their way to highlight their pizza oven as the biggest difference between Scarlett's and the two Sasha's. And considering they bought a top-of-the-line wood-fired one, I expected more of a traditional Neapolitan-style pie. But while Scarlett's pizzas are certainly wood-fired, they lack the characteristic leopard-spotted crust that defines traditional Neapolitan pies. The mushroom pizza, coated in assorted truffled fungi had a pleasant, earthy flavor. And simply paired with the housemade ricotta, this would have been a wonderful dish. However, its tomato sauce base and too-liberal coating of mozzarella overshadowed the other flavors.

The Margherita pizza was similarly overwhelmed by cheese — so much, in fact, that I had a hard time discerning where the doughy crust ended and the cheese began. The simple crushed tomato sauce hit the mark, as did the herbaceous basil chiffonade, but that's where the authenticity ended.

Scarlett's pear and prosciutto pizza is a little like communism — it sounds wonderful on paper, but it just doesn't translate well to real life. Cooking prosciutto is just difficult; heated too much, the cured meat gets dried out, tough and overly salty. Consequently, the meat on this otherwise fine pizza turned into salty bacon bits.

Surprisingly, the best dish at this sophisticated wine bar proved to be the greasy, diner-inspired burger. A perfectly griddled butter bun cradled the meat, while melted herbed cheddar oozed over the top, mingling with the grease. Lettuce, tomatoes, onion and bread-and-butter pickles dressed this perfect sandwich.

As at Sasha's, a large portion of Scarlett's menu is devoted to cheese and charcuterie plates — and, as at those other venues, I found myself gravitating toward that portion of the menu. Pizza, beef tenderloin and the owners' ambitions aside, Scarlett's remains first and foremost a wine bar.

And that's OK. Because as at Sasha's, I found myself chatting it up with my server at Scarlett's, had a fantastic time, and walked away with a good wine recommendation — one that happens to pair beautifully with that outstanding burger.

Turn the page for more photos of Scarlett's Wine Bar. 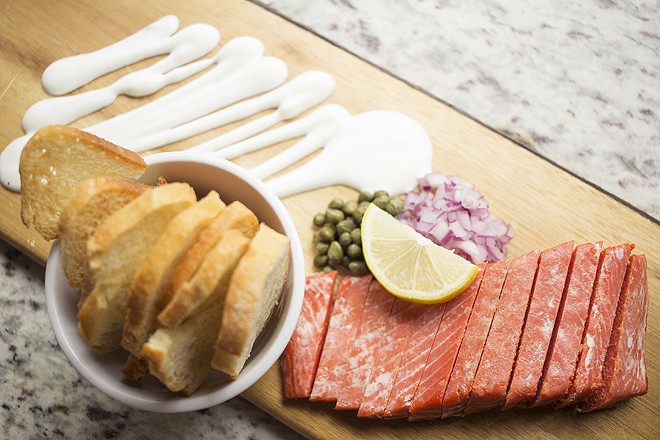 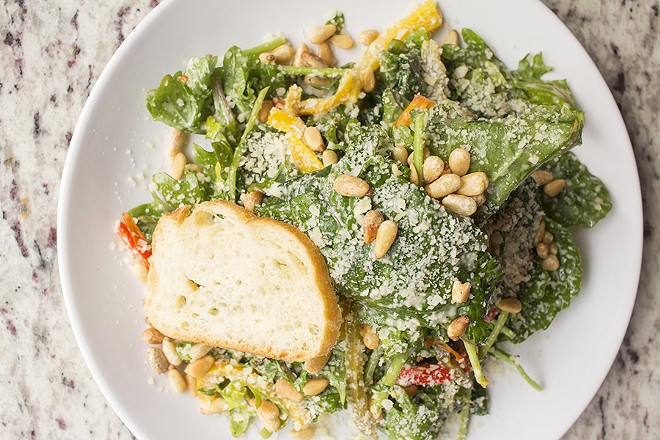