PHOTO BY MABEL SUEN Sardella is a transformation of the space that previously held Niche, both physically and in terms of the menu.

Ten years ago, I ate a reuben at Niche. It was one of a seemingly endless parade of courses that comprised the elegant tasting menu at Gerard Craft's already-legendary Benton Park restaurant. Of course, this was no mere deli sandwich. Corned pig's tongue stood in for the traditional corned beef, paired with rye gnocchi and pickled mustard seeds for a deconstructed and decidedly haute version of the classic sandwich. My friend had taken me there for my birthday. We washed it down with a great bottle of wine and were both dressed to the nines.

Contrast this with the burger recently on my plate at Craft's three-month-old reinvention of Niche, Sardella. As with the reuben, the plate offers both meat and starch, but that's where the similarities end. There is nothing deconstructed or tongue-in-cheek about the "Sardella Burger": It's a literal burger — a massive hunk of perfectly cooked and impossibly juicy grass-fed beef, crowned with mushrooms that have been infused with dashi to underscore their deep umami flavor. The burger oozed with a mix of molten Fontina and parmesan aioli that would have made a mess had it not soaked into the fluffy challah bun. This time, though, I wouldn't have much cared: I was clad in jeans and a plaid shirt.

That I could now grab a casual — albeit perfectly executed — burger in a once-hallowed dining room exemplifies the shock Craft sent through the St. Louis dining scene when he announced last June that he would be closing his flagship restaurant. To an outsider, it didn't make sense. The acclaimed chef was fresh off a James Beard win for "Best Chef: Midwest," Niche (which had relocated to an elegant space in Clayton) was still packing in diners, and the restaurant was garnering raves for its ambitious commitment to hyper-local sourcing. Niche was simply too important to close.

But that's precisely why Craft needed to close it. As he sat down to explain his decision to a room of reporters, you could see the relief cross his face. Niche had become an obligation, he explained; the burden of maintaining its level of import had taken the joy out of it. He referenced his early days as a relatively unknown chef at the original Niche, a tiny Benton Park bistro where he handled the back of the house and his wife worked the books. They'd always dreamed that the restaurant would be well-received, but as its success took on a life of its own, Craft found himself in a never-ending race to stay at the top. It garnered him awards and accolades, but for the tattooed former line cook, Niche had become too reverent.

By contrast, everything about Sardella evokes ease. If Niche made you sit up a little straighter in your chair, Sardella invites you to sink into it. The space is stunningly beautiful, outfitted to look like the Amalfi Coast kitchen of your dreams. Blue and white Mediterranean-inspired tiles cover the walls, vibrant orange banquettes provide seating and jars of preserved citrus sit next to succulents and cookbooks on shelves throughout the room. As a nod to its namesake (sardella is an Italian fish sauce), colorful sardine cans decorate the wall above the open kitchen. The room is so airy you can't help but exhale as you walk inside. 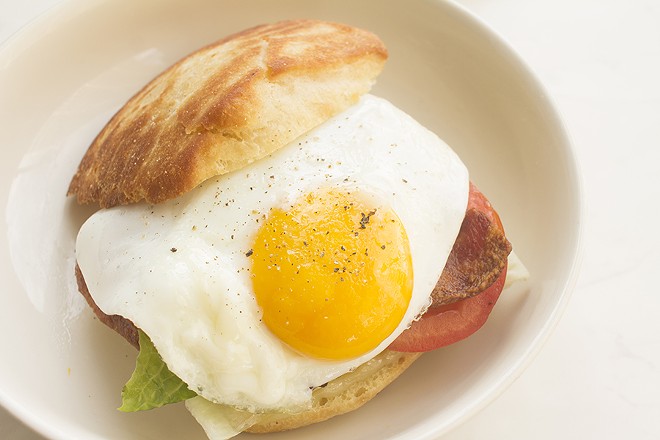 This feel carries through to the food, though you shouldn't mistake ease for a lack of ambition. Craft and his executive chef, Nick Blue, have created a menu of Italian-leaning dishes that may be more approachable than those at Sardella's predecessor, but are no less thoughtful, like creamy mozzarella-studded risotto balls, infused with the subtle sea flavor of uni. Aioli made with Louisiana's beloved Crystal hot sauce cuts through the richness with a piquant punch.

What could've been a simple dish of white bean hummus is enlivened with crushed pistachios perfumed with lemon zest. Similarly, mouth-puckering salsa verde brightens luscious burrata, turning a ball of neutral cheese into a burst of flavor. Both come with spongy, butter-soaked bread that's tasty even without being dipped into one of these excellent small plates.

Though it's called crispy, the crunch on Sardella's octopus comes from a rich paprika rub that encrusts the tender meat. Together with olive oil, it forms a delectable jus for the accompanying roasted potatoes, while an olive and date relish adds both sweet and salty dimensions.

Cauliflower soup, poured tableside over crispy farro and dehydrated brown butter crumbles, is as warm and satisfying as a beef stew. Charred butternut squash — somehow firm and not mushy, a mystery of physics — rests atop a sublime garlic-infused custard. Calabrian chile vinaigrette and red pepper jelly wrap the squash in a sweet heat. Both dishes show how magnificent vegetables can be, and why top chefs are moving them to the center of the plate.

With Craft's own Pastaria next door, you might wonder if it makes sense to put pasta on Sardella's menu. The brisket agnolotti answers this question emphatically. The bite-sized pasta pouches are stuffed with melt-in-the-mouth beef, then paired with Hubbard squash and braised cabbage. A delicate sauce of brown butter underscores the decadence.

Sardella offers a handful of larger, entrée-sized dishes, including a massive hunk of stout-braised oxtail that could easily feed two. The tail rests in a pool of gravy that packs a deep savory and baking-spiced punch despite its delicate texture. The oxtail comes with griddled piadina, a sort of large Italian tortilla; guests are encouraged to pull the meat off the bone, place it on the piadina and top it with charred lime, fresh herbs and minced onions and peppers to make an Italian version of a street taco. However you eat it, I'd recommend lapping up every last bit of that braising liquid, even if that means going in with your spoon.

Sardella's roasted chicken, meanwhile, shows how a basic dish can become transcendent when afforded proper care. A Moroccan-style spice rub flavors skin that crisps up in the oven like a chip. The crunchy texture envelopes the succulent meat, and Brussels sprouts steeped in preserved lemon are an ideal accompaniment.

Rockfish, expertly cooked skin-on, was a little flat; I didn't pick up much zest from the sorrel butter. Perhaps I was underwhelmed after enjoying the salmon Sardella serves for lunch. Served with pomegranate and Kaffir lime sauces and roasted root vegetables, this is easily my favorite salmon in town.

About those other meals — Sardella is open for weekday breakfast, lunch and a newly-added weekend brunch. It's an ambitious undertaking, but Craft, Blue and their team prove they can handle the midday challenge with dishes including the aforementioned burger and salmon, as well as a breakfast BLT with egg, bacon, pepperjack cheese and Crystal hot sauce aioli. Citrusy cured salmon is equally dazzling, paired with crème fraiche and microgreens. Both the BLT and salmon are served with genius pastry chef Sarah Osborn's English muffin, a piece of bread that makes you realize what disservice those Thomas-brand pucks do to the form. 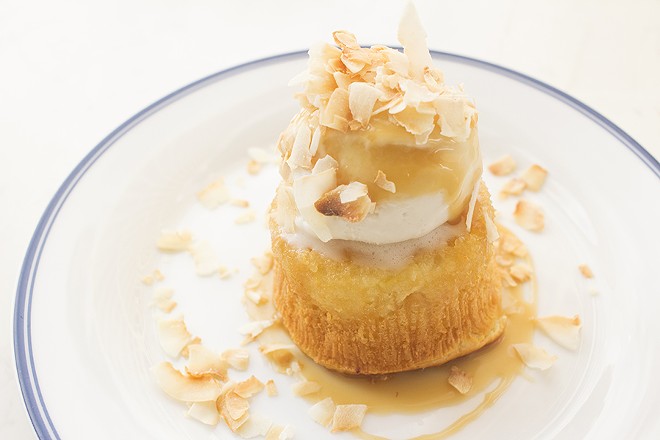 Osborn dazzles at every turn: Glazed donuts rival the best old-school versions in town, while a savory kale and parmesan Danish is like a rich butter pouf, and a pineapple rum cake, flecked with coconut and gilded with caramel, is a five-star version of the pineapple upside-down cake of your youth. And I'd be remiss if I didn't mention what could be Sardella's best menu item: warm, sea salt-dusted yeasty dinner rolls served with miso butter. If someone came in the night to smother me with these glorious pillows, I'd die a happy woman.

That I was enraptured by dinner rolls in what used to be a palace of haute cuisine shows just how much has changed for Craft and his team in recent months. What's even more striking, however, is how much hasn't: Sardella is no less a bastion of thoughtful, expertly executed food than its predecessor. The difference is that now, you can go there in jeans, order a burger and have a great time — and clearly Craft can, too.