On its face, Retreat Gastropub is so au courant it's comical. Shrubs for the cocktails? Check. Craft beer in cans? Take your pick. Bartenders with facial hair sporting leather butcher aprons that could be on loan from the movie Hostel? They're there too. If we're ticking the "Food Trends of the Twenty-Tens" checklist, just about every last one is on display at Retreat.

At a lesser place, this schtick would be cliché — maybe not chicken-and-waffles-at-IHOP cliché, but overdone nonetheless. Even the term "gastropub" is so obviously trendy as to border on passé. Five years ago, the cool kids were referring to themselves that way. Nowadays, you have to wonder how soon it is before a chain restaurant in the exurbs brands itself as such (Spoiler: one already has).

But Retreat is no mere trend-chasing caricature. Instead of causing my eyes to roll permanently into my skull, it did something rather important. It reminded me of why such a place came into fashion in the first place by filling in all the right boxes rather than just ticking them. 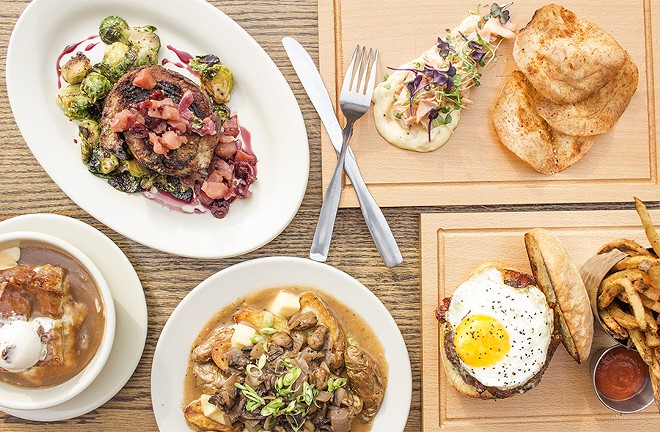 Those shrubs, for example, are just one of the many thoughtful components that go into an excellent bar program. True to the moment, you'll find the classic cocktails at Retreat, as well as several house creations, like the dangerously quaffable "Hemingway Lookalike" that marries rum with grilled grapefruit. And the bartenders? Yes, they're slammed muddling smoked cherries, but never too busy to neglect their role as hospitality professionals. On both my visits, the bar was three-deep, but I was still promptly handed a menu with a smile and treated to as much attention as if the place were slow.

Credit goes to Travis Howard for nailing the concept. Though this is his first solo venture, Howard is a seasoned industry professional whose last gig was general manager of Bailey's Range. He opened Retreat this past October in the former 6 North Café, aiming to hit that sweet spot between an upscale bar that serves food and a full-fledged restaurant.

Even in terms of real estate, it's about a 50-50 split: The centerpiece of the space is a square-shaped bar, its top made from industrial-looking concrete stained with swirls of brick red. The walls around the bar — in keeping with contemporary design trends — are lined with reclaimed wood from a barn at Grant's Farm. Table seating occupies the remaining space, which is dimly light by Edison bulbs. Retreat does not take reservations, and it can get pretty tight on the weekends, though the large side patio will help with that once the weather turns warm. 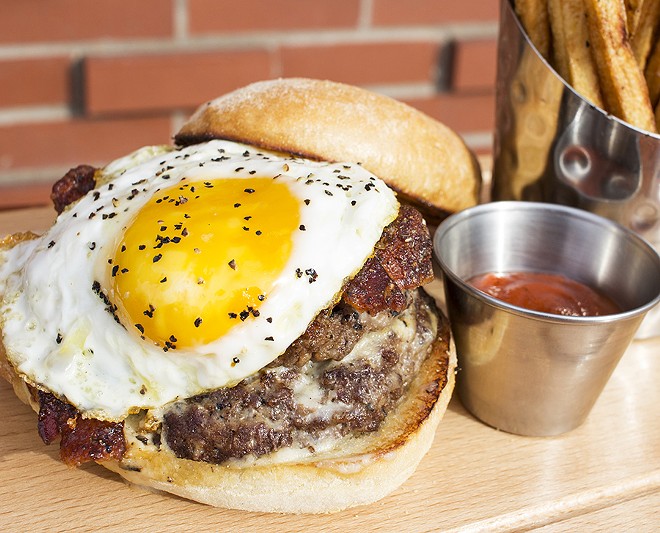 Howard enlisted chef Michael Friedman, formerly of Scape American Bistro and Remy's Kitchen & Wine Bar, to help design a menu that transcends the usual bar and grill fare. The result is a set of dishes that is decidedly less whole-animal heavy than the gastropub moniker suggests, but still seasonally hearty. Tender braised pork, served atop thick slices of griddled bread, is enlivened by the pungent punch of goat cheese spread – an enjoyable (though way over-salted on one occasion) example of that not-quite-dinner-more-than-an-appetizer niche Retreat is trying to fill.

The mac-and-cheese, though billed as a small plate, becomes a full-fledged meal when loaded with steak and peppers. Rich, cheesy sauce clings to the corkscrew noodles, and a few breadcrumbs provide crunch. I enjoyed it loaded, though I preferred the simpler version's straightforward creamy comfort sans distraction. 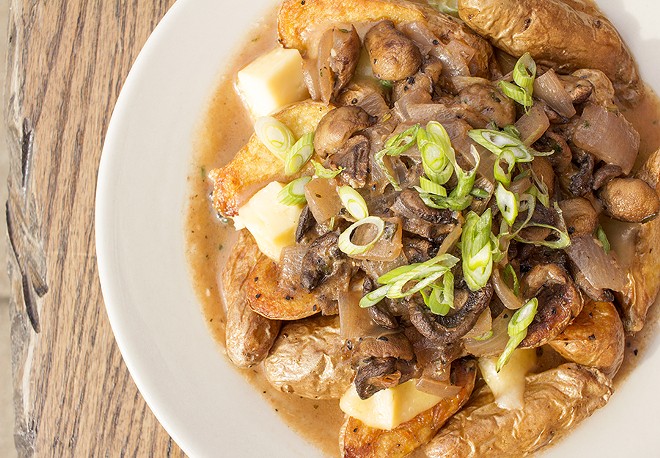 Cedar-smoked trout, perhaps Retreat's best dish, had just enough traces of sweet smoke that it accented, rather than covered, the fish. The flaky golden meat is paired with a bright, lemon caper aioli, micro greens and paper-thin taro chips that make the usual potato accompaniment a distant memory.

Another standout, the beet carpaccio, classically marries thinly shaved discs of the ruby red vegetables with peppery arugula, almonds and some of the best goat cheese I've had the pleasure of eating. The usual funk was subdued, so the cheese was almost honeyed, giving the dish a luxurious feel.

The chicken pesto flatbread is the white chicken pizza you always hope for but rarely ever get. That's because Retreat's version uses both white and dark meat chicken confit to combat the way the meat dries out in the oven in more typical preparations. The crust is St. Louis-style thin and crisp, the arugula pesto has so much garlic it will linger for days (a good thing), and there's so much gouda melted over the top it looks like spinach dip. It's delicious.

Retreat's signature large plate is the porchetta, a slice of pork loin that is wrapped in pork belly and served alongside apple cherry chutney. It's fair, but I've had tenderer versions — though still pink in the center, the meat was on the tough side both visits and too salty on one. The "Farmhouse Burger," however, was enjoyable through and through. Two patties of peppery "smashed" beef are stacked with candied bacon and a sunny-side egg, covered with three-cheese sauce and placed on a bun. It's over the top, a little like a haute slinger, and I could have used something like a pickle to cut through the richness. Still, it is wonderfully indulgent.

The most indulgent item on Retreat's menu, however, is its bread pudding. I thought I would never find a version that could make me stop mourning the loss of Harvest's iconic dish, but this one fits that bill. The soft, vanilla and cream-infused bread is soaked in liquid caramel to the point you have to slurp it with a spoon. Pecan ice cream melts over the warm dish, mingling with the caramel like a brown butter sauce. It's shockingly decadent.

But what is really shocking about Retreat is that, in spite of its trendiness, it never feels like it's trying too hard. Those fashionable trimmings fade into the background once the great food and friendly service take center stage. This one isn't just of the moment. It's a keeper.