Review: Reeds American Table Is a Smashing Success in Maplewood

There was no way Reeds American Table was going to be anything less than great. Its lineup is a who's who of up-and-comers in the St. Louis food scene. Chef/owner Matthew Daughaday has been a local darling since his days running the kitchen at Taste. The exceptionally charming Andrey Ivanov, Reeds' beverage director, is arguably the best wine mind to grace St. Louis in years — if not ever — while pastry chef Summer Wright's impressive résumé includes a stint working for Daniel Boulud. Even general manager Nicki Ball has a roster of high-profile restaurants under her belt, counting Michelle Obama as one of her satisfied customers. This group is simply too big to fail.

Yet Reeds doesn't just excel because of that talent. It excels in spite of it.

Reeds could be intimidating — the sort of place where you feel compelled to sit a little taller and nod enthusiastically as your server educates you on the finer points of heritage-breed pork jowls. That's the danger with so much star power: It often translates into an experience that makes you feel as if you are being granted the privilege of dining rather than being treated as a valued guest.

Reeds, though, starts from the "guest" premise and works backward. It's an ethos that starts at the top; Daughaday takes every opportunity to deflect accolades from himself and onto his team.

Daughaday had been about a year into his tenure at Taste when he began musing about a place of his own. His idea was for a casual, 40-seat brasserie grounded in approachable comfort food. But then Ivanov and Wright, who had both also worked for Gerard Craft, came on board, and the chef's vision evolved into a more sophisticated concept to accommodate his growing talent pool.

At its heart, though, Reeds is still that approachable comfort-food spot. The restaurant occupies the cozy Maplewood storefront that used to be Home Wine Kitchen (may it rest in peace). Walking in, it looks much like the same restaurant; the new touches are mostly just finishings. 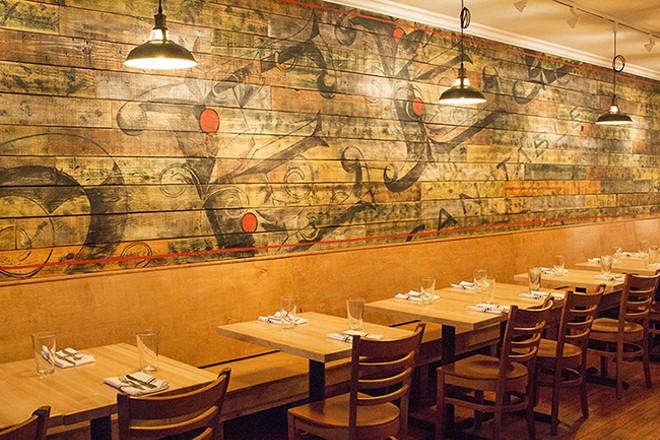 The shotgun-style space is flanked on one side by the bar, which sits against a backdrop of shiny white subway tiles. Across the room, wooden banquettes line a wooden-slat wall, decorated with a muted red and black graffiti-like design. Daughaday also converted Home's private upstairs space into a second dining room, doubling the number of seats he originally planned on.

He may have compromised on size, but he didn't bend on the food. Reeds' menu features familiar favorites so subtly nudged toward sophistication that diners may not always realize how good they've got it. Consider the braised beef cheeks small plate — arguably the best dish at Reeds. Succulent meat, the consistency of pot roast, is steeped in foie-gras cream, then piled atop a thick slice of buttery focaccia. The juices soak into the bread like a biscuit dipped in brown gravy, while slices of oven-roasted tomatoes provide a spark that cuts through the richness. It's inspired by a recipe for chipped beef on toast that Daughaday found in his grandma's church cookbook – but it's also topped with on-trend goose liver. The result is nothing short of sublime.

In another dish, pork belly — so tender it borders on spreadable — is paired with shaved Brussels sprouts, shiitake mushrooms and carrots, then drizzled with maple and date jus for the perfect balance of fat, sweet, earth and salt. Alone it is decadent; paired with a side of moist, bacon-fat-soaked cornbread, it's almost pornographic. I wasn't sure if I should dip my bread in the jus at the bottom of the pork-belly plate or in the melted honey-thyme butter that accompanied the bread, but both choices yielded pure joy.

Missteps are rare at Reeds. In fact, the only dish that did not work well was the smoked-beet small plate. The earthy root vegetables were overly smoked, then paired with rye bread crumbles that added to the bitterness – it tasted like I was licking the inside of a whiskey barrel. The spice from the 'nduja vinaigrette only exacerbated the problem. 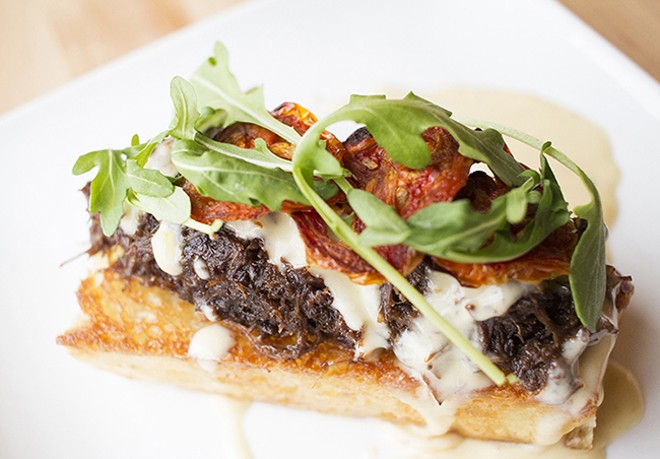 The larger plates were a parade of successes. A thick-cut pork chop, so marbled that it looked like a chop of bacon, was expertly cooked to medium-rare plus, and its sweetness was brought out by a marsala cream sauce. But as wonderful as this dish was, it paled in comparison to the lamb stew. Daughaday slow-cooks lamb necks in a meritage of Middle Eastern spices and harissa, like an exotic chile. In place of sour cream and corn chips, though, he garnishes the stew with mint, yogurt and za'atar flatbread. He'd win first place if he entered this in a chili cookoff.

Reeds excels at even its simplest offerings. The hearty sauce in Daughaday's version of spaghetti Bolognese is mostly meat — ground pork, beef and bacon are simmered in just a hint of tomato, then served over housemade noodles. Dollops of ricotta cheese make an already rich dish that much more so, but the standout is the accompanying garlic toast. (I commend Daughaday and company: They go for the garlic.) Soak up the sauce on a piece of this buttery bread, and it will change the way you eat pasta.

Daughaday's savory offerings make it difficult to save room, but it would be shameful to leave without trying Wright's roasted-pear dessert. Slices of the fruit are caramelized, skin-on, and served in their natural jus over luscious mascarpone cheese. The ricciarelli, however, make this dish. These glorious almond cookies are so delicious, I found myself calculating how much I would pay Wright to make them by the dozen. (A lot.)

I wasn't shocked by the cookies; Wright is a pastry wunderkind. Nor did I bat an eye when Ivanov's hand-picked $7 house wine proved better than most restaurants' high-end pours. What was surprising, though, is how one of the year's best restaurants made me feel as comfortable as if I were at a dinner party with friends. That's what sets Reeds apart – and that's why I felt privileged to dine there.