Review: Peno Brings the Robust Flavors of Calabria to Clayton

Pepe Kehm seemed almost apologetic as he placed a few small, empty water glasses before us and twisted open our bottle of wine. "I don't want you to think that we don't have real wine glasses," he explained. "We just like to do things country-style here — you know, like they do back in Calabria."

Kehm was chatting about the bottle of rustic Sicilian red we'd ordered, but he may as well have been talking about Peno itself. Since opening the tiny trattoria in the Moorlands neighborhood of Clayton this past January, the veteran restaurateur has made it his mission to show St. Louis diners what it is like to dine in Italy's southern tip.

Let those wine glasses be your first indication. Italy's "dirty south" is about as far removed from proper glassware and Ferragamo pumps as it is from Timbuktu. It's brash. It's low-key. Conversations usually involve someone yelling. And if you close your eyes and breathe in the aroma of fresh squid simmering in garlic coming from Peno's kitchen, it's about as gloriously real in this little strip mall off Wydown as it is on the coast of the Tyrrhenian Sea.

Kehm would know. The chef traces his family roots back to Calabria, Sardinia and Sicily. He's been working in Italian restaurants around town since he was a twelve-year-old boy washing fishbowls at Rigazzi's. He parlayed the cooking techniques he learned from his mom into a robust career, running a variety of restaurants including Felix's in Dogtown, Eros Eclectic Greek Taverna and two iterations of Spaghetteria Mamma Mia.

When the former Pizzino space came available in Clayton's Moorlands, however, Kehm finally saw an opportunity to move forward with a concept worthy of his grandfather's moniker (or at least nickname — as a little boy, Kehm couldn't pronounce "Giuseppino" and shortened it). He transformed the former fast-casual pizzeria into a cozy self-described "Italian soul food" spot with butcher paper-covered tables, warm green walls, a chalkboard advertising the day's specials and a hydroponic grow wall with fresh herbs that looks like it could have been lifted from a newly-legal establishment in Colorado.

With the exception of a few dishes, Peno's menu is what you'd expect to be served if you were a guest in someone's Calabrian beach house. Mussels fra diavolo pairs the fresh bivalves with delicate, chili-spiked tomato sauce that begs to be soaked up scarpetta-style with a slice of housemade crusty bread. The same sauce accents sautéed calamari. Served without breading in all of its tentacled beauty, the appetizer is a far cry from the deep-fried rings you'll find on most menus. The taste of the sea is strong — not from a lack of freshness but rather the restaurant's refusal to cover up the squid's essence with seasoned batter and marinara. If you go to Italy and order calamari, this is what you'll be served.

For the eggplant involtini first course, Kehm stuffs thin slices of the meaty vegetable with housemade ricotta, dredges them in pistachio-accented breadcrumbs and smothers them in tomato sauce. The result is a simmering cauldron of cream and sweet tomatoes that can make you forget there is such a thing as eggplant parmesan.

When Kehm took over the restaurant from Pizzino, he inherited the pizza ovens. Thankfully, he seems to have inherited the former tenant's pizza-making prowess, too. Peno offers a handful of versions and build-your-own options on a choice of either "Calabrese Americano" thin-style or thick Sicilian-style crust. The "Giuseppe," which I ordered thin, pairs fennel-flecked sausage with fresh fennel, pine nuts and raisins that mitigate the meat's spice. Molten ricotta and mozzarella blanket the decadent pie in richness.

The "Sicilian" pizza was no less excellent. On the "Roberto," the crunchy, focaccia-like crust is doused in brown butter and layered with sliced potatoes, wild mushrooms, fontina and goat cheeses then sprinkled with pistachio breadcrumbs. I had assumed Naples had the market cornered on pizza, but this Sicilian marvel made me think twice.

Peno's entree list is fairly small, bolstered with several daily specials. On one visit I tried the seafood fra diavolo, which was what you might be served at a beachside trattoria after a day of sailing in Sardinia: Mussels, squid, whitefish and shrimp infuse silken pasta and a light, white wine tomato broth with salty sea flavor. A red snapper filet did just as well in demonstrating the kitchen's comfort with seafood. The light fish was encrusted with herbs, pan-seared and paired simply with rice and sautéed vegetables — all meant to enhance the flavor of the sea rather than covering it up.

Veal scaloppini, a nod to the north of Italy, was tender, though the breadcrumb coating had a mushy texture. Chicken cannelloni, baked in a tomato sauce that could have been made at the hands of nonna herself, had a similar texture problem. The baked gemelli ragu was a better showpiece for the sauce. Pork, chicken and beef are slow simmered with tomatoes, resulting in a concoction so meaty, you'd be forgiven for thinking it was pulled pork. A dollop of housemade ricotta melts over the top of the pasta, mingling with the sauce to form a creamy meat and tomato gravy. It's otherworldly.

As is traditional in Italian dining, Peno offers a selection of contorini, or side dishes. Calabrese-style spinach underwhelmed as a non-creamy version of creamed spinach. The herb-crusted Italian potatoes and tomato sauce-coated roasted cauliflower both were better options.

Ironically, the biggest ding against Peno is something that is a not-uncommon occurrence when dining out in the old country. On both of my visits (spaced well apart from one another), the restaurant was out of several items. Specials advertised on the chalkboard were not available, the menu's lamb dish was sold out on both occasions and the server looked at me like I had two heads each time I asked about the bourbon slush prominently advertised at the front counter. If you've ever waited for a scheduled bus on the streets of Naples that never shows up, you know this is about as Italian as it gets.

I may not have gotten to fill up on those promised dishes, but that gave me extra room for Peno's excellent cannoli. The sweetened ricotta-filled pastries are the best versions I've had in town. Even they don't hold a candle to the ice cream sandwich, though. Housemade fig and cherry gelato is placed between two pizzelle, or Italian waffle cookies. The gelato alone would have been a showstopper. Somehow, Kehm has turned something with the mouthfeel of butter into a refreshing treat.

As we were reveling in the gelato on the patio, Kehm stopped by for a chat about the southwestern coast of Italy's toe. "That's where the Italians go for vacation," he noted. "The other parts of the country — Amalfi, Tuscany — those are where the tourists go, but Calabria is for Italians."

Again, I thought, he could be talking about Peno. 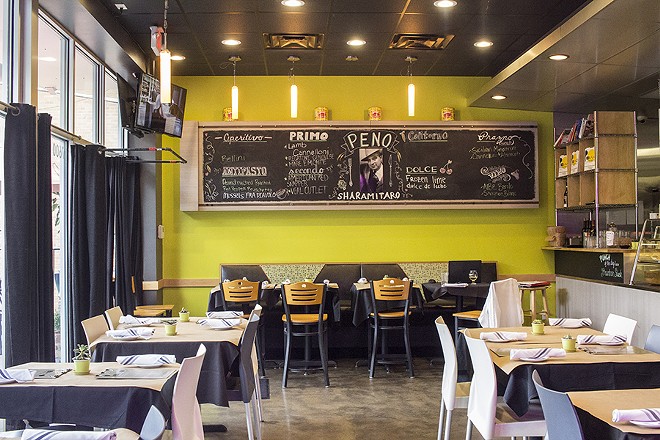 Turn the page for more photos of Peno.