Review: Nixta Will Blow Your Mind — And That's a Good Thing

Perhaps we should be forgiven for thinking that Nixta was going to be a taco joint. After all, that's sort of how executive chef Tello Carreon originally threw out the idea to restaurateur Ben Poremba. The two were having a good time playing around in the kitchen of Poremba's fine dining flagship Elaia, trying to figure out what should replace Old Standard, the fried chicken spot that Poremba had recently shuttered. That's when Carreon made an off-the-cuff-suggestion: Why not do a Mexican joint?

Carreon wasn't talking about the kind of restaurant that comes to mind when Americans think about Mexican food, all sour cream and queso fundido. Having worked in those kinds of kitchens when he first came to the United States as a teenager, he knew firsthand the bastardization that the cuisine of his homeland has suffered. You can almost hear him shudder when he discusses his time at Casa Gallardo.

No, the Mexican joint Carreon envisioned wasn't a "joint" at all. Instead, it would be a venue for shaking off the stereotypes that surround Mexican food in the Midwest. It would take authentic cuisine as a jumping-off point, but imbue it with influences from across the globe to make it into something unique. It would show us something new. It would be upscale and elegant.

Ah, so it must be an expensive taco joint? That assumption haunted Poremba and Carreon all the way until they day they opened Nixta's doors last November. When I spoke with Poremba the week of its debut, he took pains to shake off that preconception, hinting at the insult it belied. "It's like if I said I was opening an Italian restaurant and having everyone ask me if it's going to be a pizza joint," he said. In fact, he did open an Italian place last year — Parigi — and not one person thought as much. Yet a whole lot of people did with Nixta.

In this sense, Nixta stands as one of the most important restaurants to open in recent memory — not simply because it brings us masterful food from a big-time restaurateur and soon-to-be big-time chef, but because it represents the clearest example of a restaurant that not only shatters your expectations, but, in doing so, makes you grossly aware of your prejudices.

Fans of Milagro Modern Mexican, or even the Latin American-influenced Público, might protest this assertion. And indeed, these restaurants have shown us that Mexican food can be both higher-end (Milagro) and a jumping-off point for culinary exploration (Público). But Nixta is not those restaurants, dare I say, because Carreon is not those chefs.

He is a native of Mexico, at the helm of a tangentially Mexican restaurant. Yet what sounds like typecasting is instead a confident perspective that allows for creative freedom. Carreon doesn't simply throw out the standard playbook; he tears it to shreds, lights it on fire and dusts away its ashes. Like Sidney Street Cafe or the now-shuttered Niche, Nixta is more global in its style than a simple roster of its dishes might suggest. Carreon's time spent as Poremba's chef de cuisine at the elegant Elaia shows that he is just as comfortable with his boss' Middle Eastern cuisine as he is with Mexican food. In fact, over their time working together, the two have come to think of Mexico (and Latin America more generally) as the "American Mediterranean," and Carreon takes every opportunity to subtly mesh these two cuisines.

Nixta's menu is mostly small plates, and by the simple descriptors, the dishes are familiar sounding — a tostada here, a flauta there. However, once these delights appear on the table, it's clear they bear only a tangential relationship to the traditional versions.

The flauta, for example, is not unlike its namesake with its rolled up, crispy-fried tortilla shell. Split open, however, it reveals a luxurious filling of oyster mushrooms, spinach, feta, mozzarella and queso fresco. The accompanying mushroom cream dipping sauce underscores its earthy flavor.

Ceviche is equally familiar, yet Nixta's version is perfection of the form. Shrimp are crisp; scallops are so delicate and translucent you'd think they were actually scallop-infused gelatin made by a molecular gastronome. The shellfish is tossed in a razor-sharp citrus dressing that is at once heated with aji peppers and softened with rose water.

A crab tostada exemplifies the importance of sourcing good ingredients and then getting out of their way. Shockingly fresh crab meat is interspersed with avocado, poblanos and mango, and piled atop a crunchy blue corn tortilla. It's so simple, yet each bite reveals an intense burst of sweet crab flavor underscored by the bits of tropical fruit throughout. I'd put this up against something served on the coasts any day of the week.

Named after a type of sandal, Carreon's riff on the classic Mexican huarache turns the masa flatbread into almost a bruschetta. Housemade masa is formed into the shape of a flip-flop, then charred on the flattop to give it a crispy char. The chef takes the extra care of vacuum-sealing the masa so that it doesn't dry out when it's presented, leaving the corn a spongy polenta cake with a crispy exterior. He smears that base with funky black garlic spread and tops it with a salad of chopped asparagus and green beans that has been tossed in vinaigrette. Each bite reveals layers of flavor — earthy garlic, smoke from charred corn, tang from the salad. It's genius.

Carreon hews closest to tradition on pork dishes but he refines them to be the best versions of themselves. In place of the usual shoulder, he uses confit pork belly adorned with caramelized pineapple, resulting in succulent, brown-sugary meat. Carreon spent time on the line at Café Provencal, and this dish's similarity to pork rillettes is unmistakable.

For his version of cochinita pibil, Carreon wraps pork shoulder and bits of preserved citrus in banana leaves, then slows roasts it until it is fall-apart tender. As you pick apart the meat, you find little pieces of citrus rind, softened from being steamed in rendered pork, perfuming the dish. I believe you are supposed to stuff the pork into the accompanying tortillas, but it never made it that far — I was so enamored I ate it straight out of the leaf.

Tender octopus, served alongside crushed potato discs, is enlivened by dollops of almond mole. The exterior has a slight smokiness brought by a garnish of charred lettuce. Meaty sturgeon is beautifully cooked and sliced, and a cashew and black lime salsa imbues the plate with smoke and earth. In place of mayonnaise, Carreon's esquites, a variant of Mexican street corn, uses parsnip puree for its dressing; it's rich without being overly decadent.

Carreon's signature dish is the "Mole Negro de Abuelita Concepcion," a riff on his grandmother's beloved mole sauce. The chef boldly boasts that he's improved upon perfection, adding layers upon layers to her already wonderful recipe. The dish is right up to the line of being too much, but never crosses over, it's richness cut with a symphony of spices. You pick up chocolate, then cinnamon, then cardamom and honey. This ambrosial nectar can be served with beef cheeks or chicken thighs: the former making it into a complex pot roast, the latter into the barbecued chicken of your fantasies.

Carreon's menu is a parade of magnificence, but the tlayuda is what captivated me the most. As much Middle Eastern as it is Mexican, Carreon starts with a paper-thin tortilla base and covers it in a paste of pureed carrots, coriander, pomegranate molasses, guajillo and achiote peppers. The flavor hits every part of the palate: sweet, salty, earthy, tart, spicy. And that's just the beginning. He covers this glorious pizza with pieces of burrata, a field's worth of fresh herbs, and three types of seeds (pumpkin, sesame and sunflower) for an explosion of flavor and texture that is breathtaking. This dish alone catapults Carreon into the realm of the city's top chefs.

After such grandeur, a sweet course could be anticlimactic, but Nixta doesn't disappoint. The caramel-rich flan shames anything else that dares to share its name, and arroz con leche, perfumed with raisins and Middle Eastern spices, is a decadent bowl of pure comfort.

Washing down this meal with a mezcal cocktail amidst the turquoise-colored walls and thumping salsa music, there's no question that Nixta is Mexican through and through. And even though it may not be nearly as obvious to Midwestern diners, the food is too. It just takes checking your preconceptions to realize it. 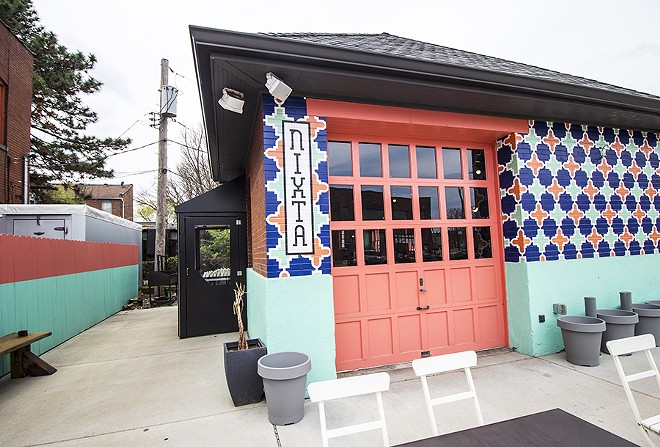