Utter those four words and you've paid homage to just about every food trend of the past few years. Craft cocktails, gastropubs, a borderline pornographic obsession with everything pork — every last piece in this combination feels overdone. We already have the Copper Pig and Capitalist Pig. Salted Pig came and went. Did we really need a Muddled Pig, too?

Which is why I came close to looking past the place. What could this four-month-old spot just off Maplewood's main drag have to add to the conversation that hasn't already been said ad nauseam? We've already wrapped the culinary world in bacon and infused it with housemade bitters. Isn't it time to move on?

My mood toward the place changed, however, when I found out who was behind it. This particular pig is the brainchild of chefs Austin Hamblin and Michelle Allender, two longtime friends who met in culinary school and have been working in kitchens around town together ever since. Before the Muddled Pig, the pair helped to open Bella Vino Wine Bar, a tiny small plates restaurant on Main Street that was so good, it made me lift my (admittedly unfair) ban on crossing the river for dinner. The thought of Hamblin and Allender released from the restrictions of tapas-style dining and given complete creative control was enough for me to schedule a visit.

They did not disappoint. The Muddled Pig is Hamblin and Allender's love song to all things pork — a near-obsession that makes for a beautiful, if familiar, melody. Just because you know this tune doesn't mean you won't find yourself wanting to tap your feet along to the rhythm.

They've built their temple to all things pig in the former bar and music venue the Wood. The space seems almost too large and open for a restaurant, though Hamblin and Allender have done a decent job warming it up with dark paint, candlelit mason jars, a vintage-looking chandelier and some long, wooden communal tables. The place still seems cavernous despite a decent number of diners and bar patrons on my visits.

If they've gone subtle with the décor, though, they are all-in when it comes to the pig. For the poutine, the chefs replace the traditional gravy with a heaping portion of stout-braised pork shoulder. The juice from the succulent meat mixes with an over-easy egg, forming a decadent paste that begs to be sopped up with fries. The dish's large, battered-and-fried cheese curds are an equally good pork-gravy vehicle, their richness mercifully mitigated by sliced jalapenos and bright pickled red onion.

Plain cornbread — no matter how soft and buttery — is not enough for the Muddled Pig. Hamblin and Allender fry theirs in bacon fat so that it soaks into every nook and cranny, then drizzle it with sage-honey crème fraiche. Likewise, instead of plain old chicken wings, they offer two different varieties of "Pig Wings" as their go-to bar snack. The soy and whiskey version had a subtle brown sugar sweetness, accented with cilantro and chopped peanuts. The "Sweet and Spicy" option was equally well-executed, its chili-spiked spice rub pairing well with funky blue cheese crumbles and pickled okra.

On the entree side of things, the Berkshire pork steak is the backyard barbecue of St. Louis summers — if your family decided to spring for the good stuff. In classic style, the pork is grilled and smothered in tangy red beer barbecue sauce. Granted, it covers the delicate flavor of the heritage breed hog, but it's about as true to form as you can get in a restaurant.

If you don't eat red meat but want to know what all the fuss is about braised short ribs, order the coffee-braised pork shank. The succulent meat, covered in a savory sauce that could be mistaken for mole, slips off the bone and into a pool of cheddar grits that have as much butter and cheese in them as they do cornmeal. A spicy orange glaze adds a slightly sweet component to this outrageously rich dish.

As much as I enjoyed the pork shank, I would have appreciated it so much more were I not assaulted by the heat and humidity of St. Louis summertime the second I walked out the door. In fact, that's my only real complaint about the Muddled Pig. This is heavy, stick-to-your-ribs fare with little in the way of relief — even the Brussels sprouts slaw was warm and hearty. Though I left satisfied that I'd had a good meal, I was shaking with the meat sweats and nearly dove into the patio's tomato herb garden for a taste of something green.

But even if light and healthy isn't on the menu, a handful of non-pork entrees are, including a bone-in, skillet-fried Amish chicken breast. The juicy meat is coated in a thick crust, then glazed with a sweet chili-spiked sauce that comes off like the love child of Southern fried chicken and takeout Chinese.

A dry-aged strip steak, covered in bone marrow breadcrumbs, is the embodiment of ostentatious eating. Grilled to a gorgeous medium rare, the grass-fed steak was slathered in so much richness I doubt even a total glutton could finish it off. At three bites, it was excellent; anything more and it would be a case of gout.

Surprisingly, my favorite dish had nothing to do with muddling or a pig. Three fillets of pearlescent haddock, battered in beer and served with tangy remoulade, proved to be the best fish and chips in town. Forget our city's famed fish fries; this is where I'll be every Friday during Lent.

The Muddled Pig's house burger is thick, well-seasoned, blanketed with gooey cheddar cheese and covered in thick bacon. On Tuesdays, for ten dollars, you get this beautifully simple sandwich with a healthy shot of Buffalo Trace bourbon and a Four Hands beer. Once word gets out about the Muddled Pig's Tuesday night special, you won't be able to find a seat in the house.

If Hamblin and Allender keep cooking the way they do, that should happen soon. The music they're making here is delicious, no matter how many times you've already heard the song. 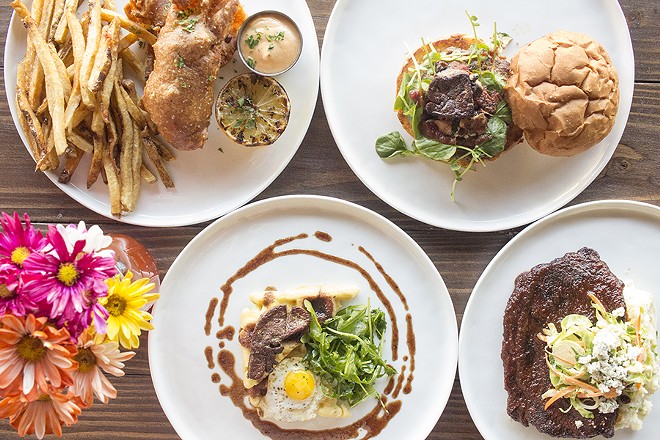 Turn the page for more photos of Muddled Pig Gastropub.