Lucky Buddha should be a catastrophe. A pan-Asian craft-cocktail lounge? Individually, each of those phrases is problematic; together they induce the kind of grimace that's usually reserved for, say, nails on a chalkboard.

The red flags continue inside the seven-month-old Gravois Park restaurant — menu items unavailable, the house signature spring rolls unable to be served because they kept falling apart in the fryer. These are the details that make you question whether a restaurant will survive the month.

But then chef Rene Cruz, who could be the incarnation of the restaurant's namesake, walks out of the kitchen to personally deliver a plate of "Tom Yum Goong." The delicate, pentagonal wontons — filled with real crab meat and chile, lime and lemongrass-infused cream cheese — are to crab Rangoon what pâté en terrine is to braunschweiger. Cruz smiles when he places them before you, as if he knows that one bite will instantly assuage any misgivings about the restaurant.

Cruz should know what it takes to please diners. The industry veteran's culinary career is even more eclectic than the Thai-Japanese-Vietnamese/anything-east-of-India-influenced Lucky Buddha. He's done Spanish-style tapas at Mosaic, Eastern European food at Red, Mexican at Rosalita's Cantina and good old American at Stable. (Conventional wisdom also credits Cruz with being the first chef in St. Louis to tinker around with molecular gastronomy.) When he and business partner Kirk Apazeller opened Lucky Buddha back in February, the pair envisioned an Asian-themed menu that would draw from, and combine, the spectrum of Far East flavors. 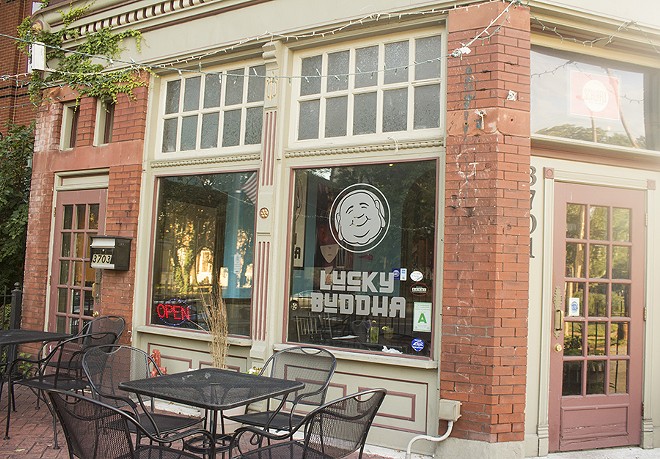 From the outside, Lucky Buddha blends in as a typical South Jefferson two-story brick storefront. Inside, though, the restaurant looks like it would be more at home on Washington Avenue. Its most prominent feature is the cerulean walls, which serve as a backdrop for bright Japanese anime murals and black and white photographs from Godzilla.

The large wooden bar top is painted the same blue as the walls — not that you'll be paying much attention once the bartender hands you a "Summer Smash." The refreshing drink, served over crushed ice so that it resembles a bourbon slush, tastes as if the bartender mixed a mint julep and a mojito, then threw in some muddled cucumber for good measure. Keyan Still of Planter's House and Robust helped develop Lucky Buddha's accessible yet interesting cocktail list. Would someone have told me that I'd be waxing poetically about an Old Granddad and cucumber cocktail, I'd have laughed. That's why Still has a bar consulting business and I don't.

Food at Lucky Buddha runs the gamut from straightforward Asian fare to playful riffs on otherwise classic dishes. Thai chicken wings don't exactly push the envelope, but they are a quintessential rendering of the Asian-style chicken wing genre — or, as my friend put it, what you hope you get when you order Thai chicken wings but rarely do. The plump drummies and wings are tossed in sweet and spicy chile glaze then sprinkled with sesame seeds. Traditional Japanese gyoza are stuffed with ground pork but served with a peanut dipping sauce for a Southeast Asian twist — though I would have preferred a brighter or spicier condiment to cut through the rich dumpling. 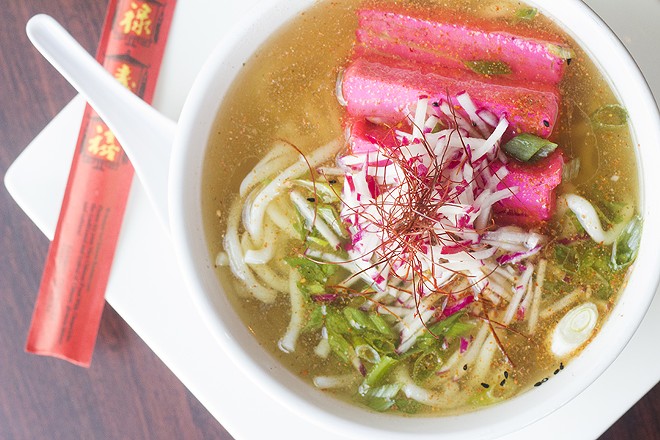 Lucky Buddha offers several options for its Japanese yakitori, which is skewered meat cooked over charcoal. Cruz plays on Korea's equally excellent barbecue culture by offering pork belly marinated in gochujang, a Korean fermented chile and soybean condiment. The marinade adds enough spice to complement the decadent pork; cooking it over an open flame caramelizes the sauce and fat together, forming glorious char-kissed sweet and salty nuggets. This dish is the restaurant at its best.

The beef tataki and radish salad, however, fell flat. Oddly, the two parts of the dish were served on separate parts of the plate — and seemed to resist combination. When paired with the accompanying citrus-spiked greens and julienne vegetable salad, the beef took on some flavor, though not enough to make it anything but bland and under-seasoned.

I was equally disappointed with the ramen. The broth, a tare fortified chicken stock, was so rich with anise that it overwhelmed all other flavors, including the surprisingly lean pork belly I'd chosen to add. The biggest problem, however, were the noodles: They were so stuck together that when I went to pick up a small amount, the entire bowlful came with it. I had to use a fork to cut them up. 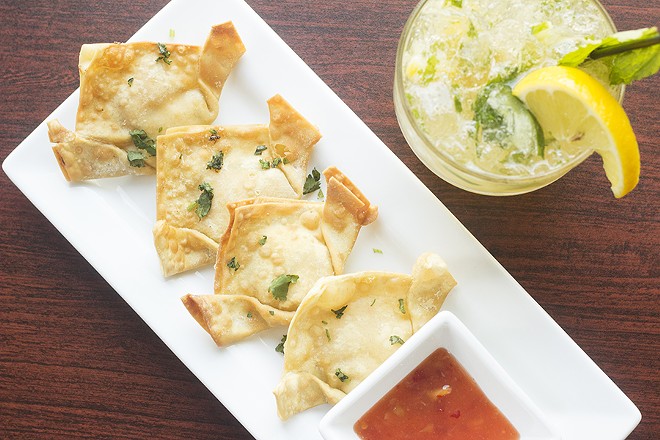 Simple and well-executed steam buns — I tried one filled with strips of melt-in-the-mouth gochujang pork; another with marinated shiitake mushrooms — are dressed with pickled daikon, carrots, cilantro and sliced jalapeños. They are the Jackie to the Marilyn — actually, scratch that. They are the Jackie to the Bettie Page that is the "Porkapocalypse."

As for that sandwich. Lucky Buddha offers five riffs on the classic Vietnamese banh mi, all of which sound fairly normal other than the wonderfully named pork version. And it's fair to say this over-the-top bombshell of a sandwich does not disappoint. It starts with soft French bread and piles on four kinds of pork: char sui shoulder, gochujang loin, five-spice belly and liver pâté. Pungent Japanese mustard and crisp vegetables offer a welcome counter to all of that pig. It should be a complete mess, but Cruz has the finesse to make it work.

You could also say the same for Lucky Buddha.