Review: KISS-Themed Rock & Brews Makes Us Want to Lick It Up

I can't stop thinking about Paul Stanley's and Gene Simmons' hot dogs. The glistening, beefy wonders have been haunting me for days, ever since I first laid eyes on them at Chesterfield's Rock & Brews. It's not just that these juicy meat tubes are mammoth — perhaps the largest I've seen, and I've seen many. No, it's not just the size; it's what they can do with them.

First, they take a frankfurter that tastes equal parts beef, fat and garlic and char it until it blisters. Juice oozes out of the dog and soaks into its soft pretzel bun — alone it's a masterpiece, but dressing it Chicago-style allows the sharpness of raw red onions, spicy peppers, mustard, relish and tomatoes to cut through the richness. If you're a heathen, however, the dog can also be prepared "Kansas City-Style," meaning topped with hunks of pulled pork, caramelized onions, sticky barbecue sauce, Gouda and jalapeños. Each bite simultaneously takes years off your life and gives you a reason to live.

Thirty years ago, KISS, raunch and hot dogs might have evoked a different vision than a pleasant dinner out with the husband and kids, but times have changed for the The Starchild and The Demon. Now family men, Stanley and Simmons were inspired to take their brand in a different direction after a backstage chat with concert merchandiser Dave Furano (a longtime friend) and restaurateur and hotelier Michael Zislis. After proclaiming the greatness of both rock and "brews," the group hatched a plan for a chain of restaurants that would celebrate just that. Seven years and seventeen properties later, Stanley, Simmons et al. find themselves at the helm of a chain dedicated to rock & roll and stuffing your face.

If you find yourself wondering why the world needs another version of the Hard Rock Café, I'd posit that there is a subtle, yet striking, difference between the two concepts. Eating at Hard Rock is like dining in a museum that celebrates the performers; eating at Rock & Brews is like listening to a bunch of great records in your finished basement while noshing on chips and queso. Granted, the five-month-old Chesterfield location features memorabilia on the walls, but it's less Elvis' old jumpsuit and more concert posters that bring you back to your youth (if, say, you're a forty-something mom who also happens to be an aspiring hair band cover singer — yes, I am their target demographic). The videos loudly feature everyone from Elvis to Elton to Soundgarden on a seemingly infinite number of televisions hung throughout the space, stirring up such nostalgia it's virtually impossible to spend more than five minutes in the place without making a comment like, "Hey, I saw them play at Lollapalooza in '93." It brings you back and it puts a smile on your face. Add in some uncomplicated but at times downright tasty food, and it's no surprise the chain is growing.

If hard rock nostalgia is the headliner at Rock & Brews, the food is a worthy enough opener. A pretzel with the size to rival the aforementioned wiener is like a giant, salt-covered pillow. It comes with a "spicy-sweet" mustard that is so pungent it will singe the inside of your nose, but you'd be advised to spend the extra three bucks on a side of luscious beer-cheese dipping sauce. Give me a side of this tangy concoction and a pint of brown ale and I could stay here all day. 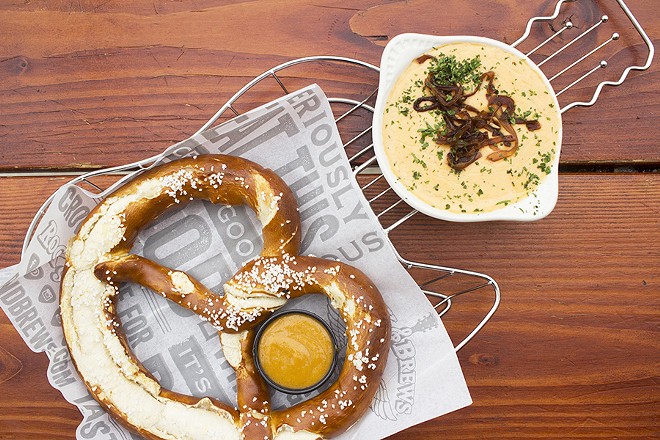 Sweet and spicy Asian wings may not be the pinnacle of haute cuisine, but they tick off everything you want in a chicken wing: a mildly spiced glaze that's the consistency of liquefied brown sugar, a punch of soy and chile heat, crunchy breading and plump meat. Ranch is served on the side, but why would you want to defile their already perfect flavor?

The respectable burgers are another example of Rock & Brews' "more is more" style. The "Royal BBQ Party Melt" is a hot mess of beef, bacon, barbecue, cheddar cheese, caramelized onion and barbecue sauce on buttery sourdough toast. Though overcooked (medium rare came out medium well), the burger's juices and the wonderful goo of the toppings made us shrug off the misstep.

If the "Royal BBQ" is messy, the "Ultimate Burger" is positively slovenly — in the most lovely way possible. A riff on a Big Mac, the Ultimate is a fat and juicy ground beef patty slathered with thousand island dressing and topped with melted cheddar cheese atop a sesame brioche bun. Crisp iceberg, thick-sliced tomatoes and pickles provide cooling crunch. It's outstanding, and the kitchen hit the temperature to a T on this one. 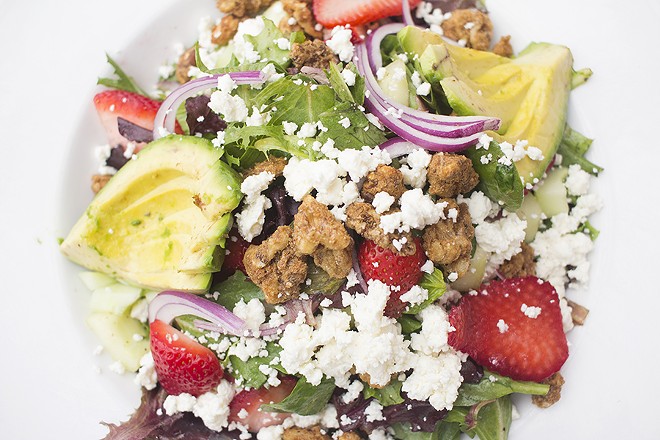 When you bite into "the Demon" chicken sandwich, you'll instantly know why it was named after someone who's been known to spit fire. This five-alarm Buffalo chicken-style sandwich borders on too much heat even without the jalapeños, but just as you are about to cry uncle, you get to the cooling slaw and ranch dressing. Then, you hit a jalapeño and all bets are off. If you like heat, it's a damn fine sandwich. Just be prepared.

I was shocked when what we thought would be a throwaway cheese pizza for our daughter came out as a respectable New York-style pie. The crust puffed up to a lovely ring of gold around the edges and had nice chewed texture. The tomato sauce skews sweet, though not overly, and dollops of fresh mozzarella are interspersed with a shredded version.

If you're not into plain jane pizzas and weren't scared off by "the Demon," the "Spicy Maui Wowie" is a surprisingly balanced option. Medium-spiced pepperoni and jalapeños add fire, while pineapple hunks quell the flames. It's a delight.

For twenty bucks, you're not going to get a Delmonico cut, but Rock & Brew's rib-eye is respectable nonetheless. Cooked to a perfect medium-rare and kissed with bitter grill char, the inch-thick steak arrives still sizzling and gilded with rendered fat. My only quibble is that it was advertised as bone-in, but — as an ironic counter to the humongous hot dog — the bone was, ahem, very small. I wasn't even sure it was in there at all until I felt around with my fork and discovered a tiny nub. It doesn't make that big of a difference as far as flavor is concerned, but it set expectations for a better cut than what was actually presented.

The ribs, on the other hand, exceeded expectations. Assuming that baby-backs at a chain restaurant would be cooked to the point of disintegrating when handled, I was surprised to find them with the appropriate chew and pull you'd find at a legitimate smokehouse. A barely there black-pepper-forward rub evoked the taste of backyard pork steaks and in another St. Louis tradition, the accompanying ramekin of molasses-style barbecue sauce had an almost cola and menthol spice to it. I preferred the ribs dry, but if you're a sauce person, it's complex and enjoyable.

After the meal's savory excesses, I was inclined to pass on dessert, but could not pass on a Prince-themed offering. "Purple Raindrops," or chocolate-filled doughnuts, were a fine enough end to the meal, though I would have preferred them to be filled more liberally with chocolate and drizzled more conservatively with the cloying raspberry sauce. The large bowl of whipped cream for dipping, however, was a nice touch, one enjoyed by my daughter, who was eating it by the spoonful between free games of KISS pinball.

We weren't the only ones who brought kids — Rock & Brews was packed to the gills with little ones, and even fur babies on its dog-friendly patio. When I spoke with Stanley at the grand opening, he said that one of the biggest reasons he wanted to get involved in the concept was that he found himself ending up with his family at crappy restaurants. There just weren't that many options, he explained, for those who wanted to take the offspring and still maintain some dignity.

But I think Stanley, Simmons and their partners had much more in mind than filling a need for themselves. They realized that, like them, their fans have entered a new phase in their life, but still want to hang onto the glory days of youth. That might mean packing the kids into the minivan and heading over to Rock & Brews for some wings and a side of concert nostalgia. It might mean reuniting with your high school pals and reminiscing about that one time you saw Halen at the Checkerdome.

Then again, it might just mean making crude jokes about hot dogs. Whatever your desire, they've got you covered.