Review: Herbie's Will Take You Back to the Old Herbie's (and Cardwell's, Too)

Anyone who frequented the late, great Cardwell's in Clayton knows that the restaurant had a particular fragrance. You noticed it the minute you stepped through the front doors and into the vestibule — the scent of cedar and spice that made you feel like you were walking into a cigar box.

As a server in the late '90s it hit me every day I walked in for a shift, and clung to my clothes like perfume even after I'd left for the day. The smell always triggered a sense of nostalgia for me, as I imagine it did for the legion of regulars who packed the Cardwell's bar like it was their country club.

Regulars at the old Herbie's in the Central West End surely felt a similar sort of comfort in that space: Chef Bonzo greeting them with an outstretched hand, vintage liquor posters on the walls, luxe tufted leather banquettes they could sink into with a glass of Chablis.

To say that both Cardwell's and Herbie's meant something to people is an understatement. The former, opened by acclaimed chef Bill Cardwell and restaurateur Rich Gorczyca in 1987, was a pioneer of seasonal American cuisine. The latter was a reincarnation of the old Balaban's, which had brought the city out of the dining dark ages when it opened in 1972, honoring its storied legacy while successfully forging its own path. Though they existed independent of each other, their common bond as icons of the St. Louis restaurant scene and not-dissimilar culinary styles resulted in the restaurants often being spoken of in the same breath.

It made sense, then, that when big changes came up on the horizon for both restaurants, they looked to one another for the solution. Though the Central West End spot was intimately associated with the Herbie's brand, owner Aaron Teitelbaum was looking to make a move when his lease came up last fall. At the same time, Cardwell's owner Rich Gorczyca had decided to retire from the restaurant business and close Cardwell's (Bill Cardwell had long since departed for Cardwell's at the Plaza and BC's Kitchen). The Clayton spot, Teitelbaum, thought, would be the perfect place for Herbie's. For Gorczyca, letting Teitelbaum take over would be a way to walk away with the comfort that his employees would be offered jobs, and a worthy successor would be there to honor the Cardwell's legacy.

The result of the arrangement is more of a merger than a simple closure and relocation — which is why both Cardwell's and Herbie's loyalists will still feel nostalgic when they step inside 8100 Maryland Avenue. Chef Bonzo, for instance, still stands at attention at the front door, though now his gaze is fixed on a sprawling patio and metallic statue. And that spice box fragrance still greets you at the entrance, only now it leads to a bar area that is all Herbie's, down to the seating and Art Deco chandeliers. Those vintage posters from Herbie's (which date back to the Balaban's days) are still there, though they hang on walls in a room that is laid out exactly like Cardwell's. The more things change, the more they stay the same.

And that's good news not just for fans of the atmosphere, but also for those hoping to see a continuity in the food. The chef at the time of the move, Chris Vomund, explained that the menu would be vintage Herbie's in style, even if many of the dishes changed. (Vomund left a few weeks ago for a job with food distribution company Sysco.) Herbie's menu always changes seasonally, he noted, so any difference people might notice was nothing more than a regular update. 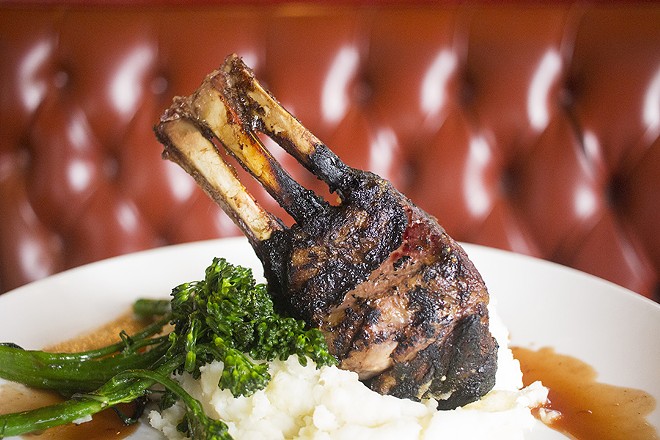 And yet it struck me that the current offerings would be equally appropriate were they emblazoned on menu stock that read "Cardwell's" — albeit one read with a mild French accent. This is not a backhanded compliment. There is a time and a place for tried and true seasonal American food. Even if it isn't exactly cutting edge, it gives a comforting familiarity — something especially important to those who frequented both the clubby Cardwell's and posh Herbie's.

Take the savory crab and bacon bread pudding, an appetizer that bespeaks the warm satisfaction of upscale Thanksgiving stuffing. A sherry-dressed mushrooms and arugula salad brightens the plate. Or beautifully cooked risotto, made even more creamy with mascarpone cheese — the best of the first courses. Peas, corn, tomatoes and fresh rosemary gave pops of flavor through the richness. It's such an excellent dish I'd be tempted to order it as an entree.

Herbie's does not stray from tradition with its escargots, a porcelain dish of buttery snails that signals its arrival from across the dining room with a mouthwatering clarified butter and garlic aroma. Short of a little salt, you'd want nothing more for this classic dish.

Vomund told me there would be hell to pay if he ever took Herbie's "Firecracker Shrimp" off the menu, though I'm not sure why. It's a fine enough appetizer — the shellfish is tender and has a pleasantly crisp panko exterior. Flavor-wise, though, it's quite bland. The menu says the dish is prepared with chipotle aioli, egg and tobiko caviar. However, I detected none of the smoke, richness or umami these should deliver. A tiny drizzle of honey sriracha was was the only thing that provided flavor to an otherwise boring dish.

A Margherita flatbread ticked off all of the boxes — tomatoes, basil and balsamic vinegar. However, the cheese that covered the crust was more akin to gooey Provel than the promised mozzarella. A lunchtime flatbread, topped with prosciutto and blue cheese, had a pleasant flavor, but the shell was so thin and crumbly it broke apart in my hands and I had to use a fork to eat it.

The vegetable lasagna, both its lunch and dinner versions, also had some textural issues. The dish tasted delicious. Herb-flecked marinara was layered with zucchini, yellow squash, spinach and so much mozzarella and marscapone cheese it oozed in every bite. However, I was confused: If it was lasagna, I didn't detect noodles. If it was more like a parmesan, then it needed some heft. As is, it seems almost soup-like when pierced. 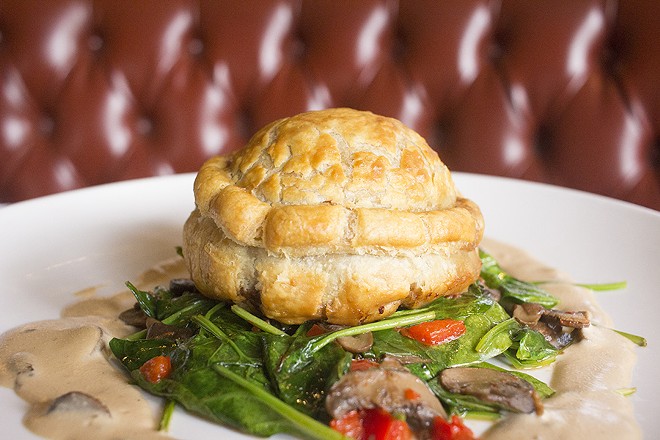 Sole, deboned tableside and cooked perfectly, is finished with brown butter, poached asparagus and fingerling potatoes — how can you go wrong? Herbie's classic lobster mac and cheese is another example of comfort seafood. Large pieces of Maine lobster tail, claw and knuckle bob in a luxurious four-cheese mornay sauce. Corn, truffle oil and an asiago gratin finish this classic indulgence.

Herbie's other signature dish, beef Wellington, remains so for a reason. Flaky puff pastry encases a mushroom duxelle-coated filet for a textbook rendition. Likewise, a bing cherry demi-glace serves as a classic pairing for coffee and chili-rubbed lamb and a duck breast, accented with plum and citrus coulis. All were served at the desired temperature on separate visits.

Like the savory side of the menu, desserts do not stray from tradition. A flourless chocolate cake provides the rich and bittersweet decadence you'd expect — and of course it's served with mixed berry mousse. Red velvet doughnuts with cream cheese frosting beg to be dipped in the accompanying Grand Mariner chocolate sauce. And let's not forget Herbie's (and Balaban's) deep-fried, Bailey's-dipped chocolate fritters, which I'm convinced remain a major reason the restaurant has so many regulars.

Over the past few years, I've mainly reviewed new restaurants, figuring that we already know what to expect of the established places. However, Herbie's relocation threw that certainty into question. Has it remained the restaurant we fondly remember? And the answer proves to be yes; Herbie's holds up.

In many ways, that's a good thing; sometimes you just want an old-school rack of lamb and a Caesar salad, served with a bread basket and ramekin of piped butter. In other ways, judging by current trends, it reads as dated. This isn't because Herbie's has changed, though; it's that we have. Putting buerre blanc and demi-glace on a meat-starch-vegetable composed plate may be timeless, but it's not necessarily en vogue.

But that's OK. No one really expected Herbie's to use its relocation as a chance to reinvent the wheel. Judging by the numerous loyalists who appear to have made the move to Clayton, no one really wanted that either. That's why its regulars — and the Cardwell's regulars too — can breathe a sigh of relief. The food is good, and the place is just as they remember.