At first, the splashy photos advertising Philly cheesesteaks seem incredibly out of place on the front doors of Worldwide International Food Market. But once you talk to Ayah Sumren, they make perfect sense.

"We're from Philadelphia," Ayah says with a smile, as if she anticipates that's not the answer you might expect from a woman in a hijab. "It's where my mom and dad met and where we were born. Well, actually my brother was born in Chicago."

Ayah seems happy for a break from cooking — and a chance to tell her family's story. Though the tiny, austere dining room of Worldwide International Food Market's café is empty, the kitchen has been buzzing day and night for the last few weeks as Ayah and her mom, Ruqaiah, scramble to fulfill Ramadan catering orders. Since expanding their market to include a restaurant last January, the Sumrens have been the culinary go-to for the area's Arab community — and tonight, like just about every night since the holy month started on June 5, she has just finished preparing an order for 300 people.

Hearing that, I felt silly for my earlier apology over a "large" five-person order. But what did I know? Though my mom lives ten minutes down Lindbergh and I pass the tucked-away strip mall regularly, I had no idea the place was such a hub for lovers of Middle Eastern cuisine.

In fact, I barely knew there was an international market there, let alone a restaurant. It was only about three weeks ago, when I used the market's parking lot to turn around after making a wrong turn, that I noticed the signs. Ads hawked Philly steaks and t-bones, catfish nuggets and chicken wings — all with the blandly uniform look of a website of stock photos titled "crappy American food."

I didn't give the place a second thought until I noticed a small sign promising "Middle Eastern Delights." It was enough of a tease to make me hop on Facebook and see what I could find out. Though the restaurant's page was almost entirely in Arabic, I didn't need a translator — the photos of everything from stuffed sheep's head to stewed lamb to pistachio-crusted pastries were enticement enough. I had to go in.

I met Ayah Sumren on my first visit, though I did not ask for her story until my third time in. Her parents Nasser and Ruqaiah, she then explained, are the embodiment of the American dream. (Take that, Donald Trump.) The pair, who separately emigrated from Palestine when they were in their early twenties, met and fell in love in Philadelphia, married, had Ayah and then moved to Chicago, where Nasser worked odd jobs to support his family.

He had a knack for businesses, and when the family moved to St. Louis, he noticed a dearth of proper Palestinian-style pita — and a community desperate to have the void filled. In 2012, he opened Worldwide International Food Market in Hazelwood as both a grocery store and a bakery for north county's growing Arab population.

When I first ventured inside, the place didn't seem any more promising than those stock photos suggested. The café sits just to the left of the market's main entrance, with white-painted concrete walls and orange and yellow Formica booths that evoke an '80s-era roller rink snack bar. The only clues that this is a Middle Eastern restaurant are the colorful murals depicting life in an ancient eastern Mediterranean village (lots of bougainvillea and quaint drinking vessels).

However, a peek behind the counter and into the deceptively large kitchen revealed a promising sight: Ruqaiah Sumren and another woman were furiously cooking, heads bent in deep concentration over kebabs and rice. Ruqaiah, with the help of whatever family member is available that day, makes everything by hand — the pita bread, the baked goods, the rice, the meats. "She's just always been good at cooking," Ayah says of her mother. "She's really just a home cook. She learned it all on her own."

Ruqaiah may lack formal culinary training, but you'd never know it when you taste her food. Her hummus — silken and spiked with just the right amount of garlic and tahini — is perhaps the best in town. Baba ghanouj is equally excellent: It's tart and lemony, but with a bitter, fire-roasted undertone that adds depth of flavor to the eggplant base.

Kalaya, a tapenade of slow-simmered tomatoes and onions, saturated in olive oil, revealed the flavor that can come from just a few simple ingredients. The black pepper-flecked vegetarian dish, meant to be spread on pita, is as rich as beef stew. The lentil soup similarly satisfies with its warm, curry-like spices.

The shop's falafel is laden with cumin-heavy Middle Eastern spices and deep fried. The exterior is crisp, but the interior is light and fluffy, like a delicate pouf. Ordered as a sandwich, it came wrapped in soft pita and liberally dressed with tahini and garlic sauces. It was also huge; two people could split it and be satisfied.

Chicken schwarma also did not disappoint. Tender hunks of marinated white and dark meat chicken, sliced from a rotisserie, were piled so high onto the pita it wouldn't close to form the wrap. Ruqaiah apologized that it was messy, but I should've been thanking her for such a large portion of the flavorful meat.

Of the entrees, the beef shish kebob was the only one that did not dazzle. Though infused with a flavorful marinade, the meat was too tough to be enjoyable. The lamb chops did not have such a problem. The mild meat needed nothing more than a little salt and pepper — liberal marbling kissed with grill char provide all the flavoring you'd ever want.

Ground beef and lamb combine to form the delicious, sausage-like kefta kebob — perhaps my favorite of the kebob offerings. Lemon and sumac light up the shish tawook, a grilled chicken kebab dish. Alone, this would have been good enough, but when paired with the accompanying garlic dip, it was otherworldly. I'd recommend dipping everything in this gloriously pungent concoction. If your dining companion complains, question your choice of lunch date.

In addition to the a la carte and catering services, the Sumrens run a bakery out of the market. Pita is their bread and butter, but their pastries have quite a following as well. Their harissa shows why: The coconut and semolina cake (a traditional Palestinian dessert not to be confused with the spicy chili paste that shares its name) is baked and drizzled with sugar syrup while it's still hot so that the sweet moist flavor seeps into every corner. Crumbled pistachios dust the top of this decadent dessert.

You'd find this same harissa at the Islamic center just down the road — the market caters the evening's iftar meal. Dining there, though, you probably won't see the kebabs and schwarma. Ayah explains that these street food-style dishes are familiar to the American palate — the Middle Eastern version of fast food. Her Arab customers come to her restaurant for its more authentic dishes. Without much notice, and for parties as small as a person or two, Ruqaiah will cook a customized feast when homesick customers need a taste of the old country.

"It's the food she'd make at home," Ayah says. And though she's Philly through and through, I don't think she's talking about those cheesesteaks. 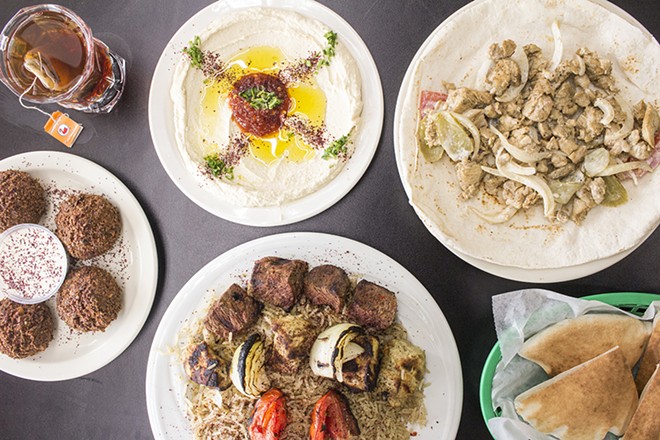 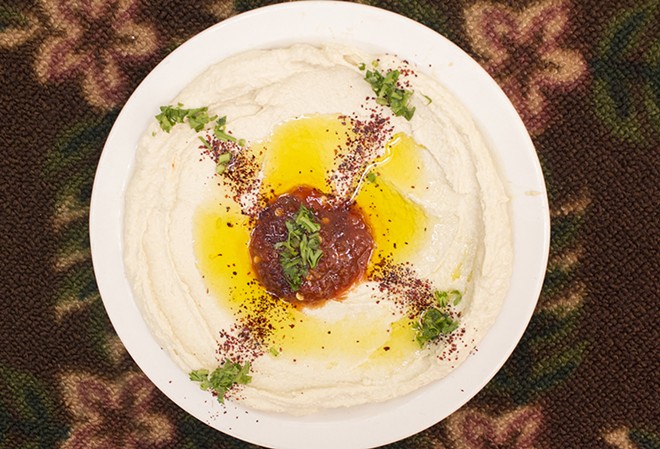 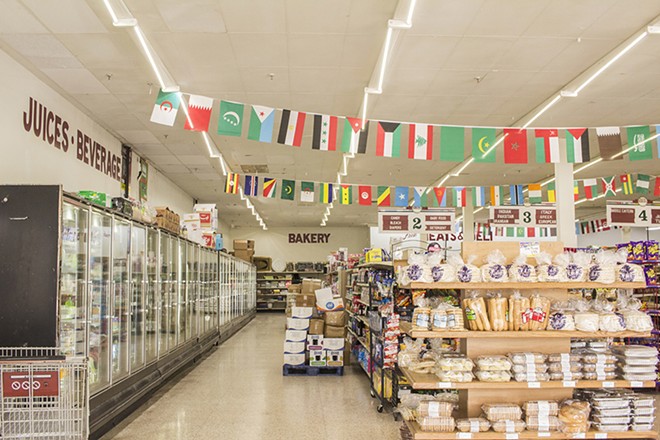 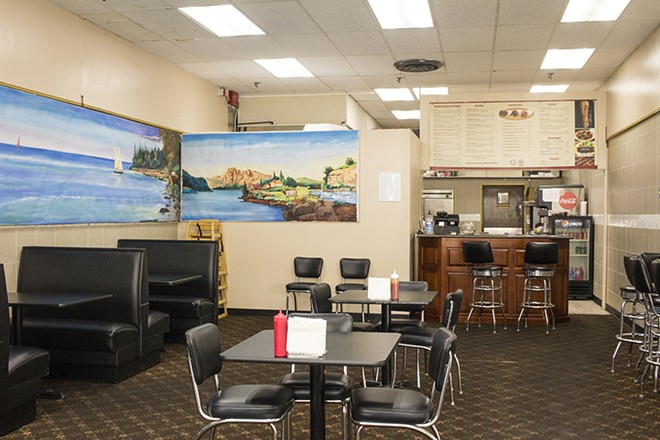 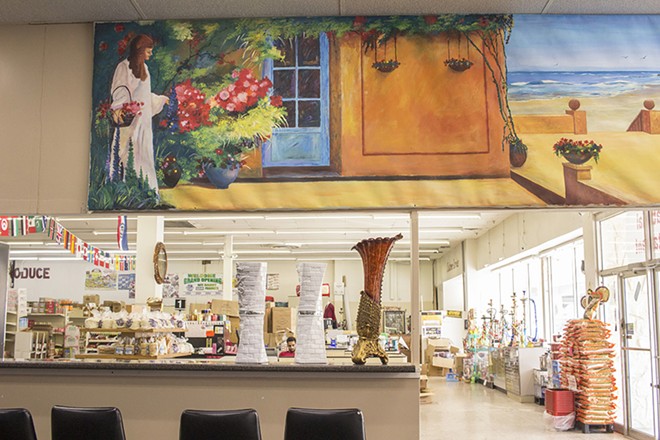 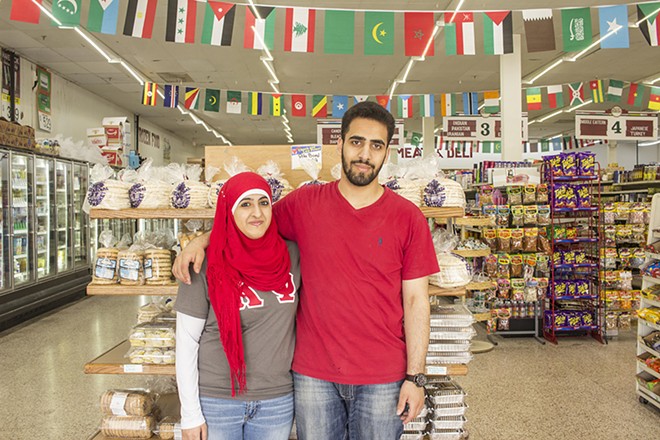 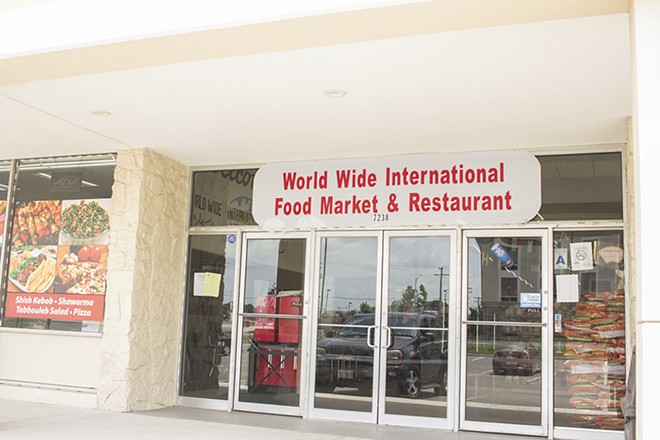