Squint your eyes as you approach Gus's World Famous Fried Chicken, and you might confuse the tiny building off Maplewood's main drag with the original, a little fried chicken shack outside of Memphis. The iconic yellow and red sign with a chicken silhouette, the Styrofoam plates, the 40-ounce bottle of Busch served in a paper bag — add these to the scent of the deep-fryer and you're instantly transported to Mason, Tennessee.

When you open your eyes fully, though, grease gives way to polish as you notice the little details that would have been as out of place as white linen tablecloths at the original Gus's. Sure, there are rough, wooden walls, but they are planks that hang as accents on freshly painted drywall. Modern ductwork straight out of a Washington Avenue loft hangs from the ceilings, and flat-screen televisions play the game du jour.

There's nothing wrong with any of this. I'm sure folks in the old days would've killed for a television as they waited in the seemingly endless chow line. But it does hint at a larger question about Gus's: How far can a hidden-gem, hole-in-the-wall phenomenon progress before it becomes more about the hype than the food? When we go to Gus's, are we buying the bird or the idea of what the bird used to be? 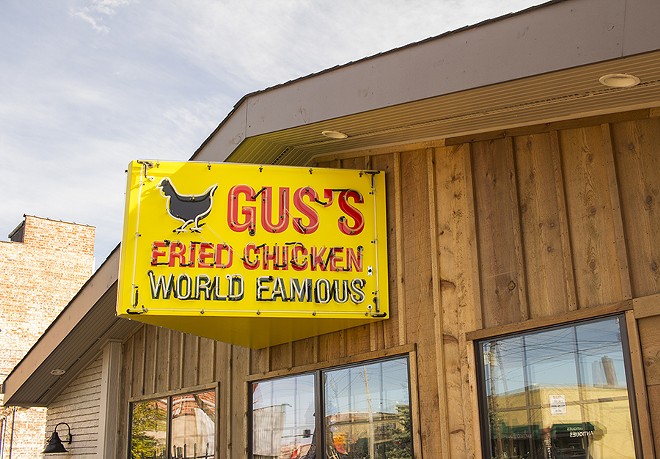 As for that bird: I wouldn't be musing about paint jobs and nostalgia had I eaten the best chicken of my life at Gus's. It is, for the most part, good chicken, but I couldn't help but think of how much better I would have found it had I happened upon it at a dive in, say, Bellefontaine Neighbors rather than waded through throngs of hungry diners eager to get a taste of the hype.

I would have probably felt more like the patrons who stumbled onto Maggie's Short Orders, which was Gus's name until 1983. When the restaurant first opened in the 1950s, Maggie's was no more than a small soul food joint operated by husband and wife Napoleon and Maggie Bonner. Word of Mr. Bonner's spicy fried chicken recipe spread, and the place became a roaring success. When the elders passed, their son and his wife, Vernon and Gertrude, took over the place and renamed it Gus's after Vernon's nickname.

Under their son Terry and his wife, Anne, Gus's began a franchise-based expansion that now boasts fourteen locations in eight different states. Along the way, they've received accolades from the national press, including the number 58 spot on Yelp's 2016 list of the Top 100 Places to Eat in the United States. That's just one spot below the French Laundry.

As such, I had high expectations for the St. Louis outpost of this legend. Apparently, so did just about everyone else in town: When franchisees Jim and Jane Zimmerman opened the restaurant last December, the place was completely overwhelmed. 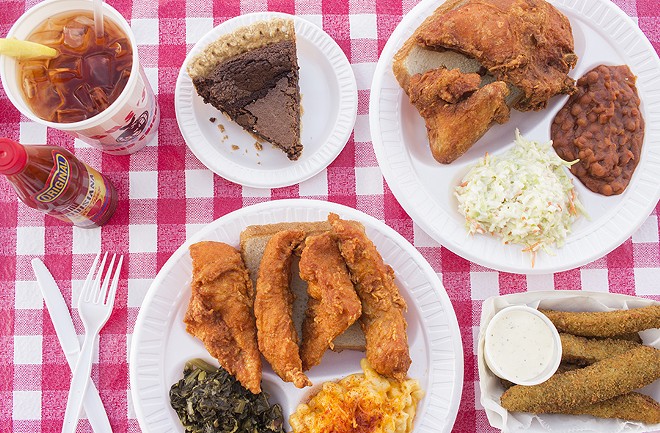 This is a place where it is imperative that you get the dark meat. Thighs, wings and drumsticks are plump, juicy and blanketed in a white-peppery batter whose recipe is guarded more closely than the dossier on Roswell. The coating is thin and crisp, with enough of that dull heat to make your nose run — cayenne-heavy, it comes without the sweetness found in many of our town's recipes. It's the quintessential, Southern Baptist church picnic chicken.

Unfortunately, the glory of the dark meat doesn't translate to the white meat. Breasts benefit from the same excellent coating, but the meat is dry, and at times chewy. Tenders are even worse. On one visit, they were dry and stringy. On another, they were so tough as to be inedible.

The sides here are quintessential soul food: rich mac & cheese flecked with paprika for a hint of smoke; sweet, mayonnaise-based coleslaw minced just like the Colonel does it (let's be honest – KFC's slaw is pretty darn tasty); and mouth-watering collards, which taste as if they've been stewed for days with honeyed ham. Baked beans are amongst the best I've had: thick with molasses and studded with pork. Give me these with a thigh, drumstick and a Busch and I'm as happy as a hen scratching in the dirt.

Gus's offers two straightforward starters: deep-fried dill pickle spears and cornmeal-crusted green tomatoes. Both are fair, though if it were a question of appetizers or dessert, I'd opt for the latter. The pecan pie's filling could pass for maple crème brulee, and the chocolate chess pie tastes like the result of an amorous encounter between a half-baked brownie and a slice of cornbread. 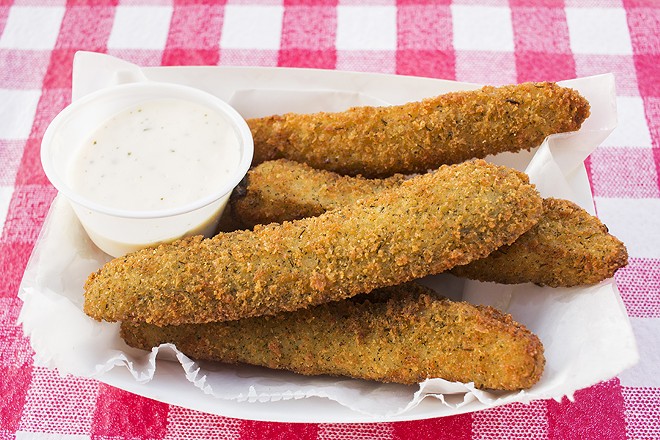 It's touches like these that make you understand just how special the original Gus's must have been. Its offshoot may not quite live up to the initial hype, but it gives a decent enough window into the past to capture an echo of the magic.

It's a past where I surely would've waited in that hour-long line and not cared about whether I could catch the score of the game. In Maplewood, I'm glad they had the televisions.