Review: For Adventurous Eaters, Tai Ke Is a True Treat

PHOTO BY MABEL SUEN A variety of dishes at Tai Ke.

In Taiwan, there's a tradition of challenging your local hot dog cart vendor to a game of dice. You buy a sausage and then roll a few rounds. If he gets the most points, you have to pay for your food; if you win, dinner is on him.

My Taiwanese friend shared this story while we were enjoying hot dogs – yes, hot dogs – at Tai Ke, the four month-old Taiwanese restaurant located on the western outskirts of University City's "Chinatown." Though dice were nowhere to be found, I still felt as if I was taking a bit of a gamble on dinner. This was my first time trying Taiwanese food, and when I saw the list of offerings, it became clear I was in for a different sort of meal: congealed pork blood, cold pig's ear cartilage, stewed intestines. I had thought Taiwanese would be basically Chinese food. Couldn't someone give me some steam buns as training wheels?

It turns out they have those at Tai Ke – some of the best pork steam buns I've had the pleasure of eating. A pearlescent sticky bun, teetering on the line between solid and air, overflowed with succulent pork belly, crushed peanuts and cilantro. Pickled mustard green relish brightened the rich pork, a palate refresher readying my mouth for another. Tai Ke calls these treats a snack, but all I wanted to do was make a meal out of them.

So, you can stick to the familiar here, and it's delicious. But I wouldn't advise that. It's the other part of the menu that makes this place such a welcome addition to the St. Louis dining scene.

Tai Ke is the first restaurant in town dedicated solely to Taiwanese cuisine. Its level of authenticity means dishes that may at first seem unfamiliar, even to the dim sum set. Though the Chinese influence is apparent, I have since learned that Taiwanese food includes hints of Japanese cooking (Taiwan was ruled by Japan for about 50 years), as well as some dishes that originated from the island's native inhabitants.

Co-owners Calvin Koong and Brian Hsia opened the restaurant last September after many years longing for an authentic representation of their homeland in St. Louis. The lifelong friends moved to the United States from Taipei twenty years ago and have since made their living cooking in Americanized Chinese restaurants – Koong most recently at Happy Wok in O'Fallon; Hsia at the West County outpost of House of Wong. Their experience with how Chinese food is represented in the U.S. made them a bit wary of opening a wholly authentic spot, but Koong had finally had it with slinging General Tso's chicken and convinced Hsia to help him do what they do best – real Taiwanese food anchored on the menu by "Street Snacks," tapas-sized items intended to be eaten with your hands as you walk around Taipei's Blade Runner-esque night markets. 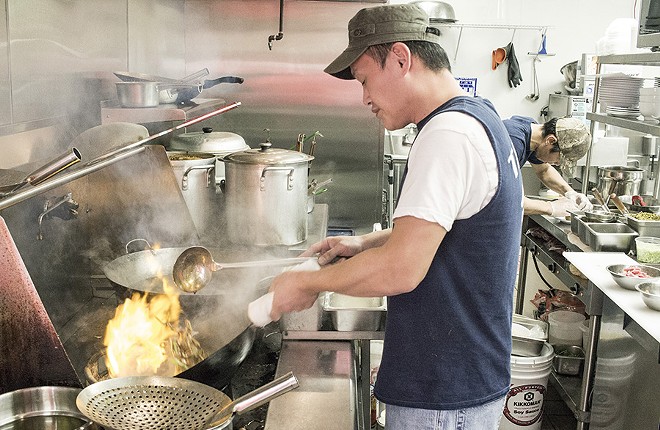 This is where the hot dog comes in. I must admit to holding a Euro-centric conception of the "carbs-wrapped-around-tubular-meat" thing, but Tai Ke's version expanded my definition of what is possible. Sticky rice cradles the garlicky pork sausage almost like a bun. A sweet glaze, a cross between Asian-style ketchup and homemade sweet and sour sauce, is drizzled over the top for a lovely salty-sweet interplay.

A pork chop seemed like an odd choice for a hand-held street snack, but Tai Ke's version is fit to be devoured Henry VIII style. The half-inch-thick piece of juicy meat is sliced into thin strips perpendicular to the still-attached bone. It's dredged in crunchy panko that has a distinct cinnamon flavor. It's as if you'd crushed up some churros and fried your pork using them as breading. The result is so genius I couldn't help but wonder why this isn't a thing.

The street snacks are not the only place where Tai Ke shines. I was surprised at how much I enjoyed small plates like the pig's ear cartilage. I'd expected the thin strips to be chewy; they were, in fact, rather crunchy and served room temperature, with only a light drizzle of the house's "special sweet and garlic soy sauce" and a few scallions. Knowing now that Koong and Hsia were trained chefs in Taiwan explains how they were able to expertly nail such perfect texture.

The intestines, or chitterlings, were equally impressive for their mild flavor and silken texture. Tai Ke serves them with a sweet, almost floral liquid that tastes like a combination of soy and plum sauces.

Even the "Sticky Rice Cube," a platter of congealed pieces of pork blood interspersed with rice to form a handful of gelatinous cakes, proved unexpectedly comforting. The description sounds like a horror show, but the outcome was a pleasant surprise. Unlike other pork blood dishes I've had, this one lacked any metallic taste; it read more like a rich mole brightened with whole basil leaves.

But Tai Ke is much more than a theater of the esoteric. For the less adventurous, the restaurant is worth checking out for its more approachable main dishes. For the "Three Cup Tofu," large, pillow-soft squares of bean curd are tossed in a mouth-watering sauce that is equal parts rice wine vinegar, soy sauce and sesame oil (a cup of each, hence the name). Whole red chilis give just a hint of spice, and basil leaves add herbal notes to a dish that redefines comfort food.

The restaurant pays homage to one of the island's largest ethnic groups with its Hakka stir-fry. The spaghetti-thick noodles are sautéed with strips of squid, tender pork, dried tofu and celery. It's a beautiful Taiwanese version of a surf and turf.

The night's biggest crowd pleaser was the sizzling beef, a searing hot platter of melt-in-the-mouth tenderloin strips with bell peppers and onions served in crushed black peppercorn gravy. Think of how good "Black Pepper Beef" at your local Americanized Chinese restaurant could be if it was expertly prepared by someone who wanted to demonstrate the excellence of his native cuisine. Tasty, smart and utterly approachable – that was Tai Ke's sizzling beef.

After enjoying such a huge payoff, I wondered why I'd ever classified Tai Ke as a gamble. Really, the odds of going into any number of mediocre Americanized "Asian" spots and getting something good are much lower than they are here.

Let's face it: There's a lot of bad faux-Mandarin food out there in America. But this little slice of Taipei is a safe bet.