If you had told me just two weeks ago that I'd be enamored of a fusion restaurant, I would have rolled my eyes. If you added that I would have, quite possibly, the best burger of the year at an "Asian/Creole fusion" place, I would have laughed you all the way back to 1986.

Yet here I was, smack-dab in the first quarter of 2016 and absolutely awestruck. The source of this delight was the "Wagyu Bulgolgi Burger" at Fleur de Lilies. A mammoth patty of juicy beef, its richness was cut only by its mouthwatering sweet-soy marinade, generously spiked with garlic, ginger and chili. Seared to a perfect pink medium, the burger oozes a cocktail of rendered fat and juice that soaks into its brioche-like pretzel bun. In place of mayo and lettuce, Fleur de Lilies crowns this beauty with a creamy, Asian-style vegetable slaw for crunch. If there was any lingering doubt about fusion cuisine, this burger made me devour my words. 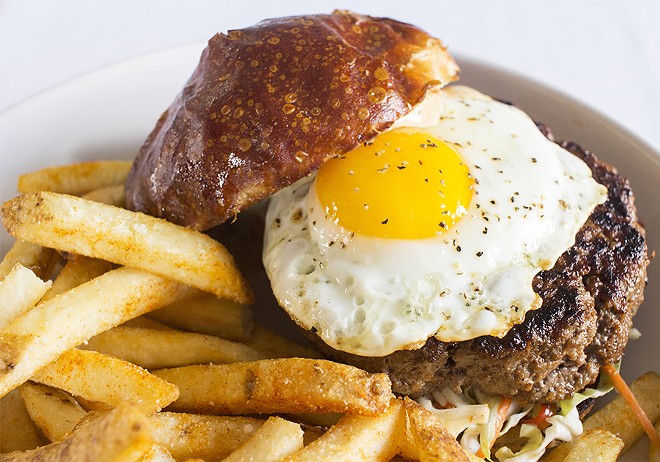 Part of what makes Fleur de Lilies such a triumph is that it's a different kind of fusion. The burger exemplifies that. Instead of the dated pan-Asian fare made popular in the 1980s by chefs like Wolfgang Puck, owners Misha K. Sampson and Alexis Kim draw upon their respective Creole and Korean heritages to create a menu that is more Korean taco than Chinese barbecue chicken salad.

Yet just as Sampson and Kim's unique combination of cross-cultural flavors prevents Fleur de Lilies from reading as dated, it also carries the risk of being too out there. What do you even call this mix? Koreole? Creorean? Even the most adventurous diners would probably admit to being turned off by the thought of crawfish bibimbap.

To prevent such a hodgepodge, Sampson and Kim (with the help of chef Michael Gipson, who has since departed) created a predominately Creole menu with a few Asian-inspired dishes thrown into the mix. You'll find a few offerings that meld the two cuisines — a spice blend here, a fusion spring roll there — but for the most part the cuisine are kept separate, with the Asian side in a supporting role. Yet somehow the menu has a cohesive, unified voice, a testament to the restaurateurs' ability to create a bill of fare that is complementary rather than competitive.

The venue for this eclectic mix is the historic rehab on the southern edge of Soulard that used to house Lynch Street Bistro and Sage Urban American Grill. Fleur de Lilies' logo, a fleur de lis with a lily rising out of the top, greets diners as they enter the front doors — a fitting symbol of not only the food but also the feminine aesthetic that Sampson and Kim have created in the space. Blonde wood tables and booths, grayish purple walls, a wood plank ceiling and potted orchids create a spa-like vibe. A prominent staircase made out of rippling metalwork leads guests to an upstairs events space and rooftop patio. (There's a gorgeous ground-floor patio, too.)

It's a lovely setting, but with food this good, I wouldn't care where I was sitting. Tender barbecue shrimp swims in a pool of Creole butter that is equal parts sweet and spice — the spices form a paste that begs to be spread over the accompanying French bread. Frog legs, dusted with peppery breadcrumbs, have such succulent meat they make you wonder why chicken wings ever became the finger food of choice.

But then you taste Fleur de Lilies' chicken wings and it all comes back to you. The enormous, plump wings are fried, then coated in a spicy dry rub that evokes the flavor of barbecue.

Sampson is especially proud of the gumbo, which comes courtesy of her great aunt Maebell. It took Sampson more than a year to pry the recipe from her, but the persistence pays off in the form of a beautifully balanced stew of shellfish, turkey sausage, chicken and duck. The version is milder and much less thyme-heavy than what is typically served in town. The flavor's nuance is welcome.

The gumbo was a precursor for the parade of excellent Creole main courses. For the jambalaya, a melange of shrimp, smoked turkey sausage and pulled chicken simmer in tomato sauce that is so spicy, the burn lingers for the rest of the meal. The flavor is worth the slight pain, but I'd suggest eating it after the "FDL Signature Shrimp Etouffee" lest you ruin your palate for this dish's more delicate flavor. The slight nuttiness of blonde roux permeates the rich concoction, which is punctuated by a slight brine from the shrimp and a pop of garlic. It's no wonder this is a well-guarded Sampson family recipe.

The "Cheesy Chicken Katsu" shows the kitchen also has prowess on the Asian side of the entrée menu. A light sprinkle of panko coats a thinly pounded chicken breast that is pan-fried golden brown. It's a shockingly juicy piece of white meat.

Blackened seasoning loosely ties the salmon back to the Creole theme, though I didn't really care about how it fit in with the menu. I was too entranced with what was certainly the most luscious piece of salmon I've ever had the pleasure of eating. Medium rare, the fish had the texture of sashimi, as if it had been poached in the barbecue shrimp butter. I'm still shaking my head in amazement at such a beautifully cooked piece of fish.

To Fleur de Lilies, Kim has brought an expertise in sushi (she has worked at several sushi spots in town, including Wasabi and BBC Asian Café & Bar), which explains the restaurant's insistence on including this genre. The sushi is good — a comprehensive selection of fresh fish and creative rolls — though one of my only disappointments came from this side of the menu. The restaurant's "FDL Fusion Roll" places baked crawfish atop a California roll. The warm temperature and muddy taste of the river bugs was slightly off-putting.

My only other disappointment was that the restaurant was out of beignets on both visits. The first time they were sold out and the second time, our server informed us, they were too doughy to serve. The silver lining to this situation was that I had to eat bread pudding twice. Fleur de Lilies' version is like a dense apple fritter coated in caramel sauce. Housemade cream cheese ice cream finishes it with a luxurious note.

And instead of just one scoop, our impeccable server gave us two — one of just the many small touches throughout the evening that made us realize what a gem of a restaurant this is. As I drifted off into a contented stupor, my initial doubts seemed about as far removed as a dated pan-Asian dish.

This, right here in St. Louis, is the future of fusion.