PHOTO BY MABEL SUEN A selection of slices from Doughocracy.

First is the fact that it's 2016 and we are just now starting to seriously talk about fast-casual pizza. That Doughocracy aspires to be "the Chipotle of Pizza" and not the other way around has less to do with the tortilla's superiority to a pie shell and more to do with Steve Ells' business acumen. Flour, sauce, toppings — had the burrito chain's founder been inspired by the East Coast rather than the West one, we could just as easily be saying that Chipotle wants to be "the Doughocracy of Burritos."

However, the most shocking thing about Doughocracy — and this is coming from an avowed pizza snob — is that it's good, really good, and much more authentic than what you'd expect from a corporate restaurant. 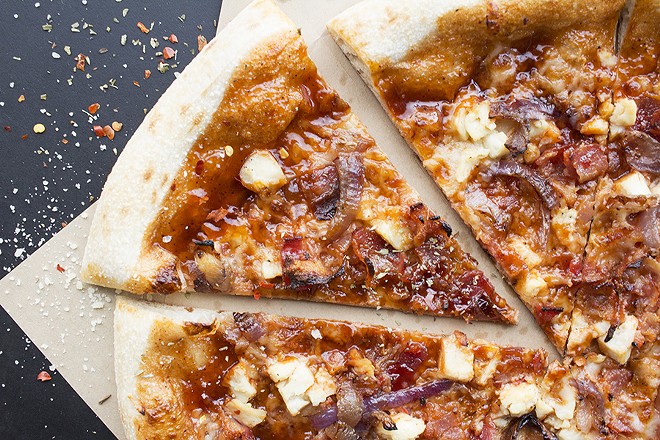 Let's be clear: If you're looking for legitimate Neapolitan pizza, you're not going to find it at Doughocracy any more than you are going to find traditional Mexican fare at an American burrito chain. But it comes pretty darn close.

Consider the Margherita pizza. Doughocracy's oven doesn't burn wood and isn't hot enough to produce the characteristic leopard-spotted crust that purists crave, but the from-scratch shell — hand-tossed to order — puffs up around the edges with just the right amount of pull to give it an air of authenticity. The sauce is nothing more than crushed DOP San Marzano tomatoes, salt and olive oil — no different than if you were dining in the shadow of Mt. Vesuvius. Fist-sized balls of fresh mozzarella are cut up before your eyes and placed atop the sauce, as are a few just-plucked basil leaves. It's fresh, wholesome and convenient, the trifecta of fast-casual dining in our post-McDonald's world.

Doughocracy isn't the restaurant industry's first attempt at the fast-casual pizza concept. In fact, the past couple of years have seen a flurry of activity on this front. Even Chipotle itself has gotten in on the game, backing a concept called Pizzeria Locale. However, the genre has yet to enjoy its real breakout moment. Having eaten at a few of the places attempting to do assembly line pies, I'd argue that's because they aren't all that good. Being the Chipotle of Pizza, it turns out, requires more than a great idea — you have to deliver a product that people want to eat.

Christa McGraw, Mimi Hurwitz and Josh Vehovic think they've found the secret sauce. The three business partners recognized Doughocracy's potential to dominate the fast-casual pizza market when they were shopping around for franchise opportunities. They came across the pizzeria in Chicago Franchise Systems' portfolio and were dazzled by the details, so they decided to be the brand's test case (the St. Louis location is the first Doughocracy to open, though a second is in the works in the Chicago suburbs). 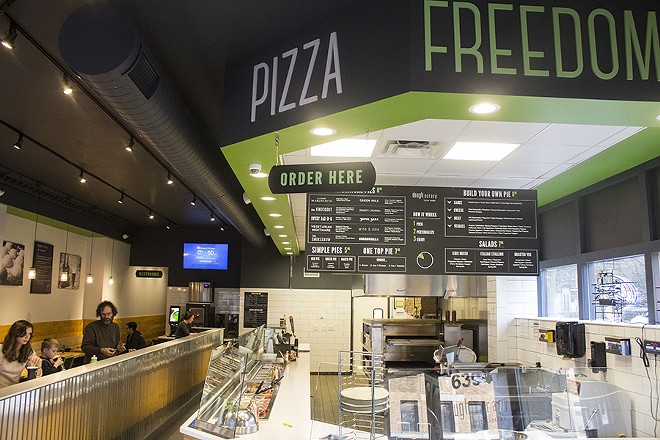 The franchisees settled on the former Ziezo storefront on the corner of Delmar and Westgate and got to work converting the boutique into a sleek and trendy restaurant. The result of their efforts is a modern, industrial space with exposed ductwork, light wood paneling and white subway tiles. Doughocracy goes all-in with the politics theme suggested by its name. The restaurant's tagline, "Life, Liberty and the Pursuit of Pizza," is emblazoned in white on the black walls, as are several other sayings meant to evoke pizza empowerment. About half the space is seating and the other half is dedicated to the large silver oven and counter where patrons line up to customize their pies.

If you're more inclined toward an autocratic form of eating, Doughocracy has thirteen "Signature Pies" that are already dressed for you, then cooked before your eyes. The "Green Mile" uses a bright, basil pesto base for roasted zucchini, eggplant, garlic and red onion. Fresh mozzarella and Pecorino cheeses form a molten topper for this flavorful vegetarian pizza. The "Gorgonzilla" is Doughocracy's version of a quattro formaggi pizza. In place of sauce, the crust is brushed with olive oil, allowing the mozzarella, Pecorino Romano, provolone and funky gorgonzola to give the pie its flavor. It's like a complex cheese garlic bread, topped with a salad of olive-oil dressed arugula. As difficult as it is to beat a good Margherita, the "Gorgonzilla" was my favorite of Doughocracy's offerings.

The "Vegetarian Nightmare" reads like it would be too much of a good thing — pepperoni, Italian sausage, soppressata and bacon all vie for the pizza shell's limited real estate. However, the makers place just enough of each meat on the pie without overwhelming it. The result is a dish that picks up the flavors of each individual component: tang from the pepperoni, fennel from the sausage, smoke from the bacon and fiery spice from the soppressata.

Doughocracy's "Sweet Bae-B-Q" (its name perhaps the only unfortunate thing about this place) is a textbook example of what you want in a barbecue pizza. Molasses-sweet barbecue sauce and hunks of smoky bacon evoke the flavor of backyard ribs, while the chicken remains moist — a difficult feat when firing already-cooked chicken in an oven. However, this pie delivered the only flub of my visits, albeit a minor one. The pizza must have slid sideways before it was placed in the oven, because the toppings and sauce pooled toward one side. 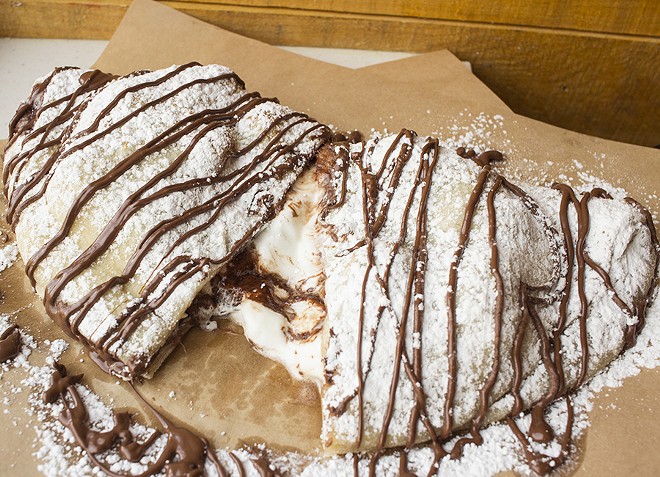 The "Nutella Bomb" made up for this minor mistake in the same way a winning Powerball ticket would make up for a bit of overspending. Doughocracy's signature dessert is a pizza shell, generously slathered with Nutella, topped with marshmallows and folded in half like a calzone. It's the dessert equivalent of shock and awe.

Doughocracy doesn't need such an overwhelming display to bring in people, though. What's so striking about the place is just how well it succeeds at the pizza fundamentals. It's not going to replace a trip to Naples, but it comes about as close to authentic as a fast-casual franchise can. Have we finally found the Chipotle of Pizza? If so, that's a compliment to the former.